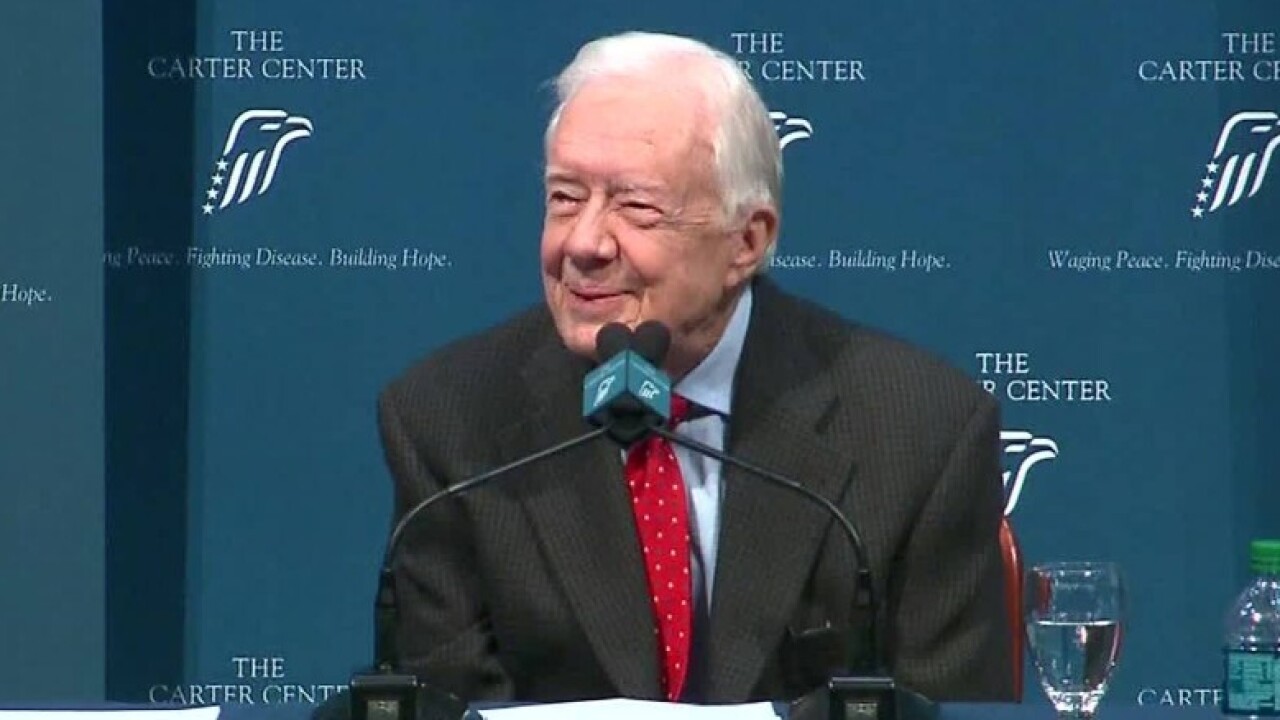 ATLANTA — The satellite trucks were not at the Carter Center in record numbers Tuesday night as they were a few weeks ago when Jimmy Carter told the world about his cancer. Then, the former President was candid in announcing at a news conference that melanoma had spread to four spots in his brain.

In the weeks since, Carter — known for his indomitable will — has been going about his public routine, almost as though the announcement of his serious illness was about someone else.

Just two days after his first radiation treatment in mid-August, he celebrated the 88th birthday of his wife, Rosalynn. The next morning, he stepped into Maranatha Baptist Church in his native Plains for his 698th Sunday school lesson. He spoke as he has done on many a Sunday — except that the church struggled to accommodate the more than 1,000 people who showed up, and Carter chose not to shake any hands for fear of infection.

And so it was Tuesday night at the Carter Center where he and Rosalynn led a public conversation as they have on many September nights. The crowds were thicker than they have been, but that was the only difference.

Carter’s intention was to update people on the progress made by his namesake center, which works to promote peace and democracy and fight disease across the world. Before he began, he spoke again of his cancer, knowing that his audience was eager to hear the latest.

Again, he spoke plainly and with humor.

“I’m getting treated for it very well,” he said. “There’s a new medicine that’s been developed for my disease. It’s called pembrolizumab. It took me three weeks to learn how to say it.”

Carter has received the second of four planned drug treatments and so far, he said, he has not experienced any ill effects. That is, besides having to drink copious amounts of fluids every day.

“Instead of getting productive work done, I spend a lot of time in the rest room,” he said laughing.

His eyes are on the world

It’s difficult to tell that Carter is battling cancer or that he will turn 91 in a few weeks.

He answered tough questions on global conflict with the authority befitting a former leader of the free world.

Carter said the United States and European powers need to vigorously engage in bringing an end to the current migrant crisis overwhelming Europe.

“The best thing is to deal with Syria,” he said. “There’s not an easy answer. We now have more refugees from war zones than we have ever had.”

Carter urged President Barack Obama to begin negotiations that would involve nations that are key in the Syrian crisis, including Russia and Iran. He also said those two countries could be key in defeating ISIS.

Invariably, some of the questions asked of the Carters Tuesday night were deeply personal. What was their favorite game to play in Plains? Answer: basketball.

“Also Jimmy was a tennis star in high school, although he never beat his father,” Rosalynn added. It was a light moment that followed a far more difficult one in which she fought to keep her composure. It can hardly be easy for her to accompany her husband at event after event with a smile on her face.

New realizations in reaction to diagnosis

Those who attended Tuesday’s event remarked, as other audiences have, about how Carter handled his appearance with grace, how his public events have been so remarkably void of self pity in the shadow of a grave illness.

In the weeks after the cancer became known to the world, Carter has made a lot of headlines. He had always been known for his accomplishments after the White House, much of which contributed to his winning the 2002 Nobel Peace Prize. Now scholars, historians, journalists and former staffers were revisiting his Washington years, many in a kinder light.

It is something that has not gone unnoticed as the Carters try to go about their lives as normally as possible.

Rosalynn Carter told the audience Tuesday she was proud of her husband when he was in the White House.

“I think people are beginning to realize what a great president he was,” she said.