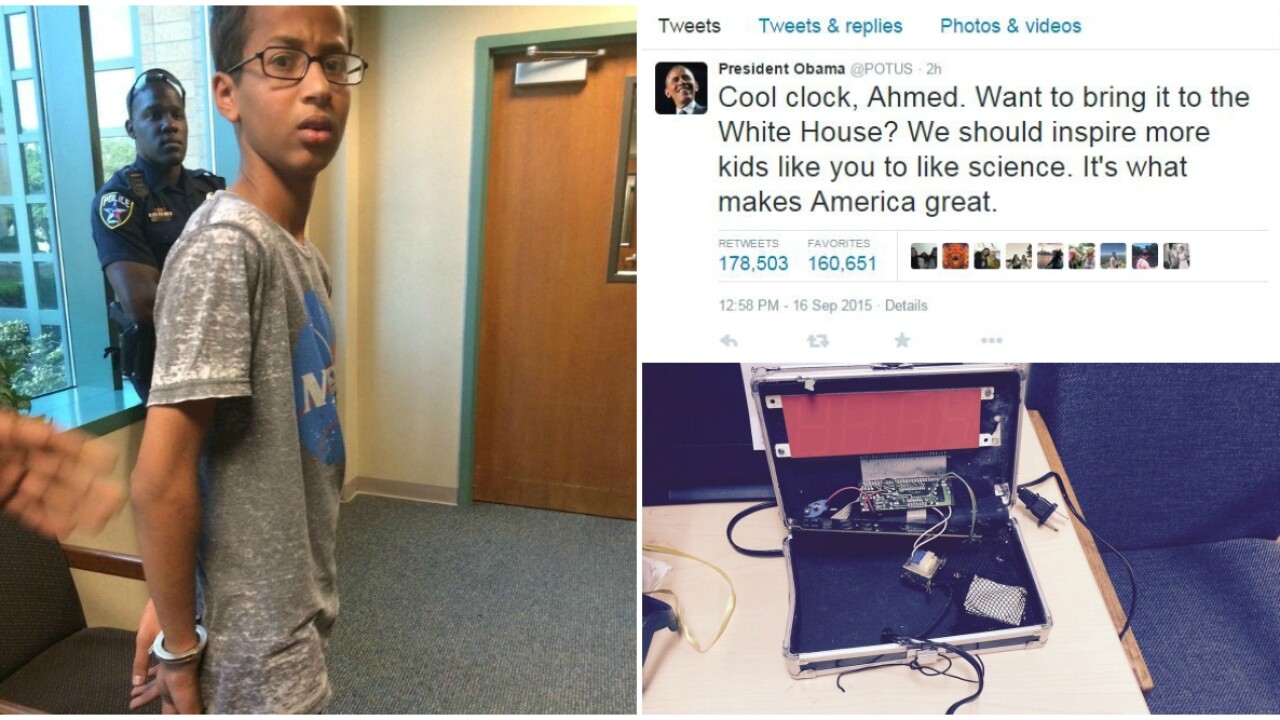 WASHINGTON — President Barack Obama used Twitter to invite Texas teen Ahmed Mohamed to bring to the clock he created to the White House. Ahmed was led out of school in handcuffs this week when officials believed the digital clock he created and brought to school was a hoax bomb, but authorities later said no charges would be filed. Obama’s tweet on Wednesday reads: “Cool clock, Ahmed. Want to bring it to the White House? We should inspire more kids like you to like science. It’s what makes America great.”

Cool clock, Ahmed. Want to bring it to the White House? We should inspire more kids like you to like science. It's what makes America great.

When Ahmed Mohamed went to his high school in Irving, Texas, Monday, he was so excited. A teenager with dreams of becoming an engineer, he wanted to show his teacher the digital clock he’d made from a pencil case.

The 14-year-old’s day ended not with praise, but punishment, after the school called police and he was arrested. A photo shows Ahmed, wearing a NASA t-shirt, looking confused and upset as he’s being led out of school in handcuffs.

Irving Police spokesman Officer James McLellan told the station, “We attempted to question the juvenile about what it was and he would simply only tell us that it was a clock.”

The teenager did that because, well, it was a clock, he said.

On Wednesday, police announced that the teen will not be charged.

Chief Larry Boyd said that Ahmed should have been “forthcoming” by going beyond the description that what he made was a clock. But Boyd said that authorities determined that the teenager did not intend to alarm anyone and the device, which the chief called “a homemade experiment,” was innocuous.

Outrage over the incident — with many saying the student was profiled because he’s Muslim — spread on social media as #IStandWithAhmed started trending worldwide on Twitter with more than 100,000 tweets Tuesday morning. The school’s Facebook page is roiling with sharp criticism of the way the teen was treated, and the hashtag #engineersforahmed is gaining popularity.

“Cool clock, Ahmed,” Obama tweeted. “Want to bring it to the White House? We should inspire more kids like you to like science. It’s what makes America great.”

The President would like the teen to join him and other scientists next month for the White House’s annual Astronomy Night, White House press secretary Josh Earnest said Wednesday.

Clinton tweeted that “assumptions don’t keep us safe” and urged the teenager to “keep building.”

“I think this wouldn’t even be a question if his name wasn’t Ahmed Mohamed,” said Alia Salem of the Council on American-Islamic Relations. “He is an excited kid who is very bright and wants to share it with his teachers.”

Many criticized the school on Facebook. Its creator, Mark Zuckerberg, posted his support.

“Having the skill and ambition to build something cool should lead to applause, not arrest. The future belongs to people like Ahmed,” Zuckerberg wrote. “Ahmed, if you ever want to come by Facebook, I’d love to meet you. Keep building.”

Kevin McKinney posted, “How did a bunch of complete idiots end up accidentally running a school? Were you all yanked out of a zoo and given paychecks? Learning centers are for teaching…not for ruining innocent people’s lives with your racism and pathetic stupidity!…”This kid is destined to be something great if the dimwits of Irving don’t ruin him first.”

Chance Williams posted, “Ahmed Mohamed deserves a public apology from you, the school administrators, police, and teachers involved in his arrest. I hope he sues, and the school district has to pay for his college education.”

Texas law stipulates that a person who commits a hoax bomb offense is one who “knowingly manufactures, sells, purchases, transports, or possesses a hoax bomb with intent to use” it or intentionally causes alarm or reaction.

Ahmed’s father Mohamed Elhassan Mohamed, who immigrated from Sudan and has twice run for that country’s presidency, told CNN Wednesday that he was upset that the school did not contact him immediately to tell him about the situation.

The first he heard of it was when he received a call from police, who said his son was being charged with having a hoax bomb, Mohamed said.

He rushed to the police station where he saw his son “surrounded by five police and he was handcuffed,” the father said. Ahmed told his father that he’d asked to phone him but the police told him that he could not because he was under arrest, Mohamed recounted.

“I asked if I could talk to or speak to my son and they told me, ‘No, not right now’ because they were taking his fingerprints and asking him questions,” Mohamed said. “I asked if I could see the thing they were calling a bomb. The police never let me even see it but I knew what my son brought to school. It was an alarm clock that he made. He wakes up with it most mornings…”

Police are holding the clock as evidence, Mohamed said.

A reporter at a news conference Wednesday asked Chief Boyd about the allegations that Ahmed was told he could not call his father and was interrogated alone for some time at the station.

“I’m not aware of that,” the chief said, adding that the incident isn’t being investigated.

Boyd was also asked if the teen’s religious or ethnic identity played a role in how he was treated. The chief said it did not, and he praised the department’s relationship with Irving’s Muslim community.

However, he said, “We live in an age where you can’t take things like that to school.”

“My son is a very brilliant boy,” Mohamed said. “We need people like him in this country.”

The teen has never been in trouble before, the father said, saying confidently that he thinks this is a case of Islamophobia. “My son’s name is Mohamed — people just think Muslims are terrorists but we are peaceful, we are not that way.”

“We live in the land of opportunity to grow and help and the people who did this to my son, they do not see him that way,” Mohamed continued. “My son said over and over that this was an alarm clock and my son only brought it to school to ask for help from his teachers, to show that he can do this amazing thing and maybe get appreciation and to show him (he can become) something bigger in the world — an inventor.”

Mohamed said it wasn’t until after the fact that he received a call and an email from the school, telling him about Ahmed’s arrest and informing him that his son had been suspended for three days.

The father and others were meeting Wednesday with attorneys to decide what steps, if any, they might take next, Mohamed told CNN.

At the Wednesday news conference, a spokeswoman for the Irving Independent School District told reporters that the way the teen’s experience has been described in media reports is “unbalanced.”

She declined to explain why, citing the need to protect a student’s privacy. When the family gives written permission to discuss the incident, the school will offer more information, she said.

Earlier in the day, MacArthur High School provided a statement to CNN in which it said it was cooperating with authorities and said privacy laws prohibited it from sharing details about student discipline. “We can assure everyone that school administrators are handling the situation in accordance with the Irving ISD Student Code of Conduct and applicable laws.”

Mohamed isn’t sure if his son will go back to school Thursday. He’s afraid the police will keep his invention and he’s worried about being called names.

But he’s happy about the widespread outpouring of support. His family started the hashtag #Thankyouforstandingwithme.

“It gives him hope,” the teen’s father said. “Right now he is trying just stay positive and is listening to the news about him and reading about people’s comments him on social media. It’s really too much for him to take in right now, but long term it will be good for him. He doesn’t want to show he is a victim.”

It was an English teacher who got spooked and reported Ahmed to the principal, the police said.

“We always ask our students and staff to immediately report if they observe any suspicious items and/or suspicious behavior,” the school’s statement reads. “If something is out of the ordinary, the information should be reported immediately to a school administrator and/or the police so it can be addressed right away. We will always take necessary precautions to protect our students and keep our school community as safe as possible.”

A reporter spoke with the boy in his bedroom, which is full of equipment that allows him to tinker and create.

“Here in high school, none of the teachers know what I can do,” Ahmed told the paper while he soldered metal and played around with a cable.

A middle school robotics club member, the teen has won awards for his inventions.

He recalled showing one teacher the clock and her telling him that she thought it was “nice” but he shouldn’t show other instructors, according to the paper. The teen put the clock in his bookbag but an alarm beeped in the middle of 6th period and Ahmed showed the teacher what he had, the newspaper reported.

When Ahmed was called out of class, he said he was brought into a room with four police officers, one of whom said, “Yup. That’s who I thought it was.”

Ahmed told the Dallas Morning News that he felt aware of what he looked like and his name as the officers fired questions at him.

He recalled that one officer said to him, “So you tried to make a bomb?”

He disputed that and kept telling them he’d created a clock.

Meanwhile, the teen’s defenders continue to slam the school and police.

“I really hope you guys are absolutely ashamed for possibly ruining the ingenuity of one bright kid who made a CLOCK for crying out loud. What kind of education does your professors have?” David Velez wrote on the school’s Facebook page. “It sounds like they are the ones that need to be going back to school!”

“Shame on your school and its administration for arresting Ahmed Mohamed,” wrote Jillian York. “Way to stifle a kid’s creativity and energy. I hope you’re all replaced with compassionate, non-racist, administrators and teachers.”