A trip to the park, then a flash flood: 12 die, 1 missing at Utah-Arizona border 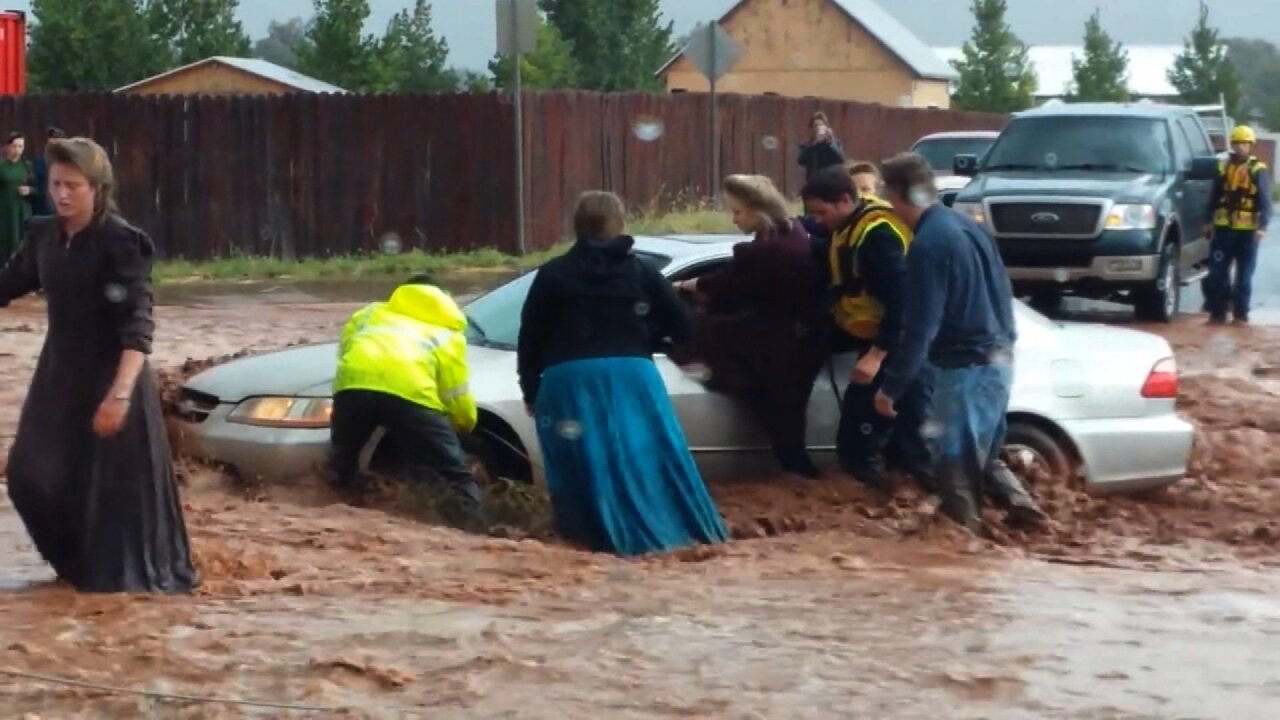 HILDALE, Utah — Two vehicles carrying women and children from a park were washed away by a flash flood barreling down a canyon near the Utah-Arizona border, leaving 12 people dead and one person missing, officials said Tuesday.

Among the killed are at least six children and three women, according to Utah officials in the city of Hildale and with Washington County Emergency Services.

Three people survived Monday’s flood, including a boy who was found walking around a creek, said Hildale Mayor Philip Barlow.

Two survived by escaping from their vehicle, he said. The youngest fatality was a child about age 4, said Hildale Assistant Fire Chief Kevin Barlow.

The two vehicles carried a total of 16 women and children after a visit to a park, the mayor said.

Most in the community are members of the Warren Jeffs polygamist sect known as the Fundamentalist Church of Jesus Christ of Latter-day Saints, or FLDS.

One vehicle stopped Monday afternoon at the flooded Short Creek, whose high water prevented any crossing, and some occupants exited the vehicle to watch the flood, the mayor said.

At that moment, “a huge flow of debris and water” came from the canyon behind them, the mayor said.

“It came onto the street behind them and washed them into the ravine, and the dropoff there is 20, 30 feet. So the witnesses say the vehicles were just gone,” the mayor said.

The rush of water was so intense it washed the two vehicles hundreds of yards downstream, and one vehicle was found a quarter mile away, in the creek, the mayor added.

The flooding ravaged an area that straddles the border from Hildale to Colorado City, Arizona.

The flash flood started with heavy rains in the canyons above Hildale, the assistant fire chief said.

“Most of the people were thrown from the vehicles,” the fire official said.

“It happened within like a half hour, 45 minutes,” he said. “(Then) it was just gone. And then the sun was shining again.”

By late Monday, he said, the water had mostly receded.

But as of Tuesday evening, storms threatened yet another round of flooding.

A flash flooding warning was issued until 7:45 p.m. local time for the Utah-Arizona border area, including Hildale and Colorado City, Arizona, the National Weather Service said.

Utah Gov. Gary R. Herbert said the state is offering “its full resources to the town of Hildale to aid with the search and rescue effort.”

“I am heartbroken to hear of the recent tragedy in Washington County,” the governor said.