RICHMOND, Va. — The Richmond Folk Festival will bring its unique combination of art, food and music to Richmond’s riverfront Friday, October 9 – Sunday, October 11.  One of the most anticipated events leading up to the Folk Festival each year is the annual poster unveiling.

Richmond artist Bizhan Khodabandeh, 34, was chosen to design the 2015 Richmond Folk Festival poster and answered some questions about the inspiration behind his design.

How did you get hooked up with the Richmond Folk Festival?

Bizhan: I was one of several artists suggested by previous poster artists. 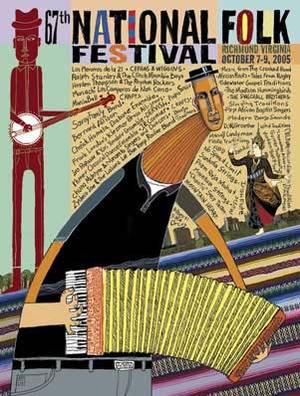 What was your initial reaction when you were asked to create the 2015 Richmond Folk Festival poster?

Bizhan: Excitement and then intimidation. I have a lot of respect and admiration for many of the past artists. It’s a big deal for our city, so there is a lot of pressure to be at least on par with the past poster artists.

What was your inspiration for the 2015 Richmond Folk Festival poster?

Bizhan: There was one of three ways that I could think of to do a poster for an event that includes so many musical genres. I could focus on one genre while sprinkling a few others in the background, avoid any genre by focusing on folk music abstractly OR to just focus on one genre.

Artists have done all of these.

My final decision was to do what Leslie Herman did last year, which was to focus on a genre while highlighting a couple other acts. Since DJ Grandmaster Flash was one of the big acts this year, I decided to focus on hip-hop as a point of departure.

What is your impression of past Richmond Folk Festivals?

Bizhan: I love attending, but seeing it through the eyes of my younger brother is probably a better gauge. He is a guitarist that studied jazz and classical music in school. He also plays a little saxophone and setar. He says that it’s one of the only times he can get to see top performers in their respective genres in Richmond – rather than limited to many of the city’s favorite go to musical genres. And its FREE! Heh.

Last year I was impressed with Supa Man who performed traditional Native American instruments, layered/looped them to create a beat and then rapped on top of it.

I also recall a man beat boxing through a harmonica and my daughter was blown away by the breaking battle. Of course, like everyone else, the Mayan Sundance was breathtaking too. Mongolian throat singing is always a favorite of my entire family. I also loved seeing a Native American drummers/singers as well as their cover of a rock song – if I’m remembering correctly. I love blues. I love jazz. It’s all in one place.