McKENNEY, Va. -- A small town in Dinwiddie County had a very eventful Friday night, thanks to two gas stations.

Wallace’s Super Market and Quick Mart,  located in the 21000 block of Boydton Plank Rd, appeared to be competing against each other with record low gas prices.

Dinwiddie County resident, Karen Hamilton, said she and her friend, Peggy Shifflett, arrived at Quick Mart around 7:30 p.m. to fill up her gas tank for her lawnmower. She said the gas was $1.65 a gallon at that point. Then she noticed someone at Wallace’s Super Market lowering their price as well.

The gas war had apparently begun.

Hamilton said she stayed to watch the prices drop and see cars lineup for the chance to get gas at one of the stations.

"We were going to go to Denny's, but there's too much excitement here," Hamilton said. "We need to get some popcorn." 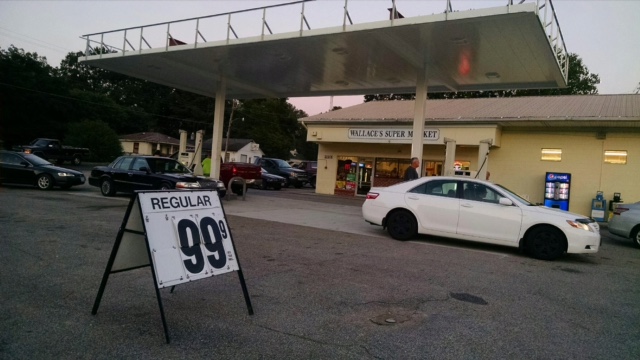 Hamilton said Wallace’s Super Market price got down to .99 cents while Quick Mart's prices dropped to .95 cents. She said after almost an hour of price drops, Wallace's put their price back up to $2.03 and closed around 8:15 Friday night.

Hamilton said this quiet little town had a busy night, "McKenney don't get this kind of excitement too often."

"How I look at it, I didn't lose money, I added more customers,” said Mohamed Garawi, who owns the Quick Mart.

Garawi said the gas war between his station and Wallace's started around 4 p.m. Friday.

Once news spread, people came from near and far. Keith Abbey fills up at the station frequently and made it to the station before the mad rush.

"Mo, called me and told me,” Abbey said. "I didn't have to wait, but other people were waiting... I thought it was awesome."

And Garawi, who said he did not anticipate the response the price drop garnered, honored the last person in line.

"I was very surprised to see all the happening and I'm very happy everybody got gas. Everybody was satisfied,” Garawi said.

The customers who missed the cheap gas, returned Saturday hoping to save a few bucks.

"I really thought it was... going to be 99 cents,” Christopher Lipston said.

When asked if he would do it again, Garawi replied maybe, but said he wasn't sure when another drop like Friday's would happen.

WTVR CBS 6 has not heard back yet from Wallace’s Super Market.