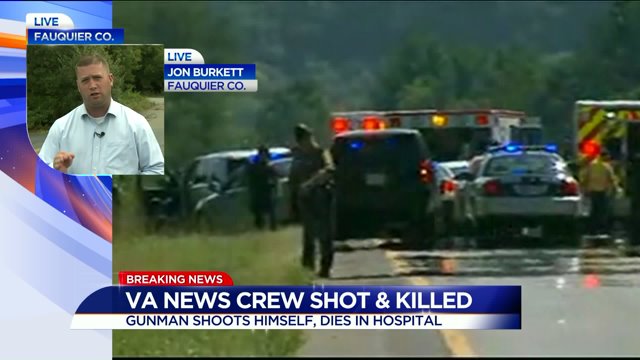 Jon Burkett has the report for WTVR.com. 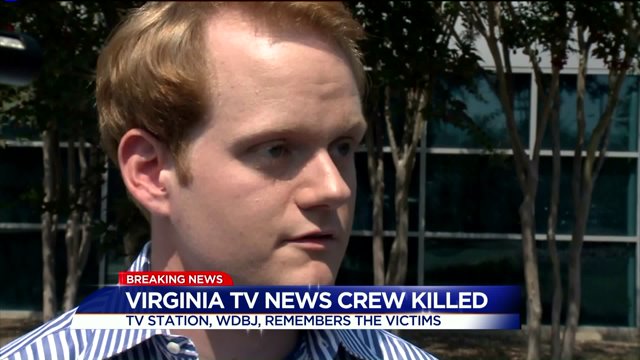 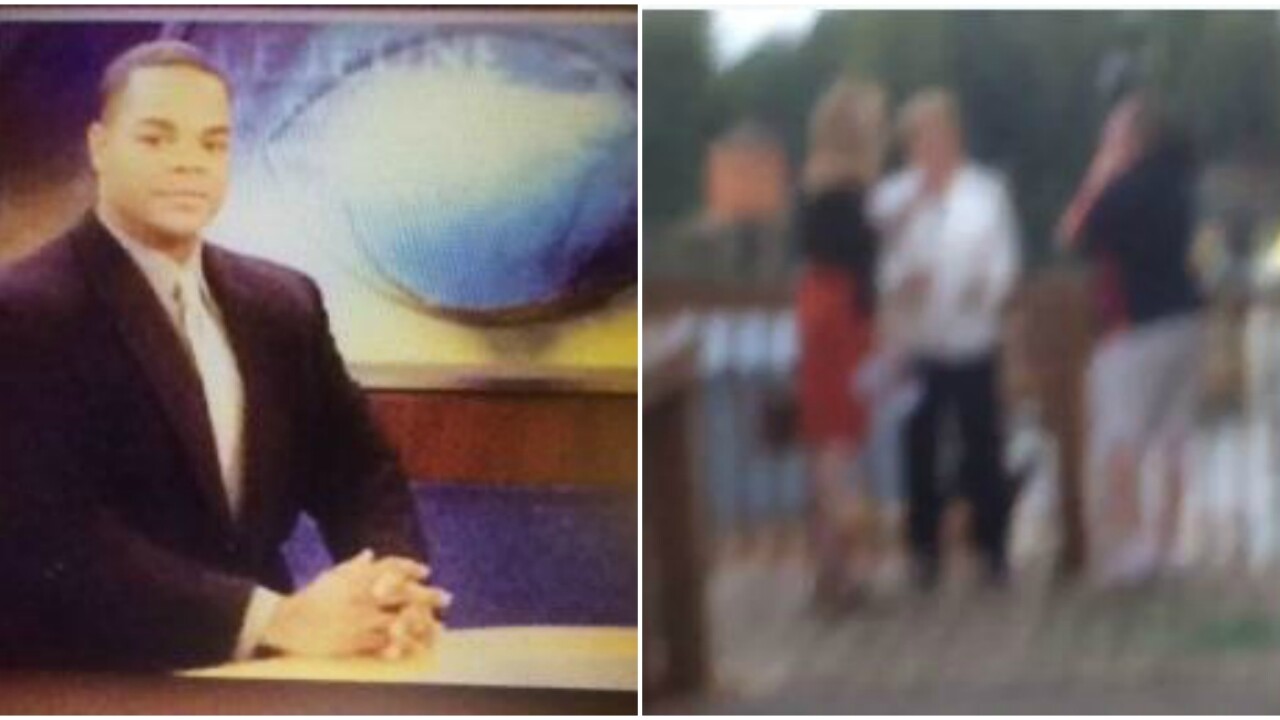 MONETA, Va. -- Video of two journalists being shot at -- filmed from a gunman's perspective -- was posted Wednesday on social media accounts that appear to belong to the suspected shooter. Reporter Alison Parker and cameraman Adam Ward of Roanoke, Virginia-based WDBJ-TV were fatally shot Wednesday morning while live on-air. Vicki Gardner, the woman being interviewed at that moment, was injured and in surgery.

Law enforcement later confronted WDBJ employee Vester L. Flanagan on Interstate 66, and Flanagan shot himself, officials told CNN. It is not clear whether he was killed or injured. Flanagan worked at the TV station for one year as a reporter under the name Bryce Williams, a former employee told CNN.

A Twitter account using the name Bryce Williams posted a series of tweets hours after the shooting, making allegations and posting video of the shooting.

The same footage of the shooting from the gunman's perspective was posted on a Facebook page, also under the name Bryce Williams. Both social media accounts were suspended within minutes of the hard-to-stomach video being posted.

The video does not show who is holding the recording device. In the footage, you see the camera approach the spot where Parker and Ward were conducting a live shot. The person recording hovers for a few moments just beside where the TV crew is working. The reporter and cameraman don't appear to pay any attention to the person.

Then, a gun comes into the frame, aimed at Parker, and several shots ring out. A string of tweets -- fragments of allegations and claims against Parker and Ward -- preceded the video posting.

The suspected gunman approached WDBJ reporter Alison Parker and photographer Adam Ward as Parker conducted a routine interview about a local story outside Moneta, Virginia. The shots rang out at about 6:45 a.m. Both women screamed.

As the camera fell to the ground, the audience caught the briefest glimpse of a man who appeared to point a gun toward the downed cameraman.

The station cut away to a shocked anchor, Kimberly McBroom, back in the studio.

The woman being interviewed, Vicki Gardner, executive director of the Smith Mountain Lake Regional Chamber of Commerce, was shot in the back and is in surgery, said Barb Nocera, the chamber's special projects manager said.

The gunman is believed to have fired six or seven times, Marks said.

He remains on the loose. The Bureau of Alcohol, Tobacco, Firearms and Explosives has joined in the manhunt, while the ATF and FBI are participating in the investigation. Area schools are on lockdown.

Virginia Gov. Terry McAuliffe told WTOP radio in Washington that the suspected gunman may be a disgruntled employee of the TV station.

Authorities know the identity of the man believed to be the shooter, a law enforcement official told CNN.

"We do not know the motive," Marks said. "We do know the Franklin County sheriff ... they are working very diligently to track down both the motive and the person responsible for this terrible crime against two fine journalists," he said during the station's coverage of the shooting.

"Our hearts are broken," Marks also said. "We have people walking around here in tears, lots of hugs."

McBroom described Parker as a "rock star" and said, "You throw anything at that girl and she could do it."

Another journalist at the anchor's desk said Ward was engaged to be married to morning show producer at WDBJ, Melissa Ott, and Ward recently told her, "I'm going to get out of news. I think I'm going to do something else."

Ward joined WDBJ in 2011 after graduating from Virginia Tech with a degree in communication and media studies, according to his Facebook page. He enrolled at the university in 2007, the same year a gunman went on a deadly rampage, leaving 32 people dead.

In April, days before the eighth anniversary of the campus massacre, Ward changed his Facebook profile photo to an image of the Virginia Tech logo with a back ribbon.

Parker was the morning reporter for the Roanoke station and a native of Virginia, having spent most of her life outside Martinsville. She started with WDBJ as an intern, her biography on the station's website says.

She previously worked with another CNN affiliate, WCTI-TV, in Jacksonville, North Carolina, near Marine Corps Base Camp Lejeune.

She was a graduate of James Madison University's School of Media Arts and Design in Harrisonburg, Virginia.

Chris Hurst, a reporter for the station, tweeted that he and Parker "were very much in love" and had just moved in together after dating nine months, "the best nine months of our lives. We wanted to get married. We just celebrated her 24th birthday."

He continued, "She was the most radiant woman I ever met. And for some reason she loved me back. She loved her family, her parents and her brother."

Hurst described himself as "numb."

Parker and Ward worked together every day, Hurst tweeted. "They were a team. I am heartbroken for his fiancee," he wrote.

A local pastor, "a friend of the newsroom," is at the station, consoling Parker's and Ward's co-workers, he said.