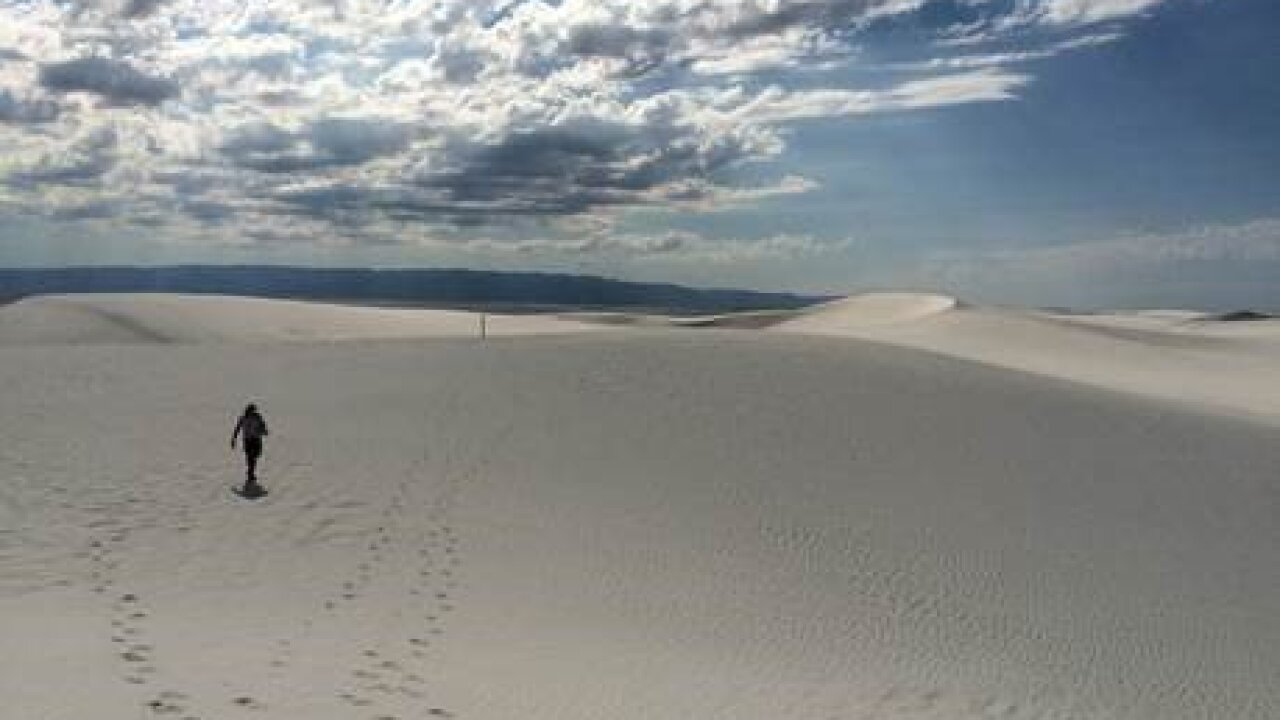 This undated photo shows a lone hiker on the Alkali Flat Trail at the White Sands National Monument in New Mexico. On Tuesday, August 4, David and Ornella Steiner of Reims, France, were found dead along the trail of apparent dehydration, the Otero County Sheriff’s Office says. They were hiking with their 9-year-old son, who was found safe hours later. Credit: Gail Melson/National Park Service

NEX MEXICO — A French couple who died while hiking in a New Mexico desert on a 100-degree day may have kept their 9-year-old son alive by giving him extra water rations, Otero County Sheriff Benny House said,

Ornella Steiner, 51, and David Steiner, 42, of Bourgogne, France, were found dead last week off a hiking trail in White Sands National Monument, a vast and treeless desert park about 226 miles from Albuquerque.

Their son was found dehydrated but alive beside his father’s body, House said, apparently unaware his mother was already dead.

Though the parents didn’t carry enough water for the hike, they gave the boy more water than themselves, House said.

“The parents would take a drink and give him two drinks,” House told CNN affiliate KVIA. “I’m sure that’s a contributing factor in how he fared so well.”

Autopsies are not complete but the deaths appear to be heat-related, the sheriff said. The boy’s grandmother flew from France to Albuquerque to care for him. Authorities are not releasing his name.

“It was the perfect storm for this family. They started off the trek with two 20-ounce bottles of water. When we got there, there was no water left in the bottles,” House said. The park newsletter advises hikers to carry 1 gallon (128 ounces) of water per person.

The Steiner family apparently traveled to the 275-square-mile park, last Tuesday to admire the otherworldly beauty of the wave-like white dunes.

“There is no shade,” she said. “There is no cover. You are out exposed to the sun, the wind the heat, the reflection of the sun off the white sand. It’s a hash desert environment.”

The family set out about noon on the Alkali Flat Trail, a 4.6-mile loop marked only by posts staked deep in the gypsum sand.

After walking about a mile, they left the trail and either rolled down or fell down the dune, House said. The sheriff said he’s doesn’t know if that was accidental or not.

From what the boy told investigators, the mother, who already wasn’t feeling well, aggravated a previous knee injury. She headed back to the trailhead, but made it only about 300 feet before collapsing, House said.

Park service employees on patrol found the mother dead around 5 p.m. Looking at her camera, the deputy saw photos of a man and boy at the park’s entrance and expanded the search.

Searchers found David Steiner about 45 minutes later. The boy was beside his father’s body.

“He wasn’t crying,” House said, but “he was dehydrated and of course he was upset.”

After parting ways with Ornella Steiner, David Steiner and his son apparently continued walking for another 2,000 feet, still off the trail and unaware of the mother’s collapse, the sheriff said. Then the father collapsed.

Through an interpreter, the boy described his father as confused and having “lost his bearings,” the sheriff said. House said it appears the father was disoriented — a common symptoms of heat stroke, according to the CDC.

His tongue was swollen and he repeatedly told his son “the truck is right up there,” though they were more than a mile into the trail, the sheriff said.

The boy was taken to a hospital and French consular officials were notified, House said. But the boy didn’t speak English, so in the meantime the sheriff’s office found an interpreter — the mother of a deputy’s girlfriend, who is fluent in French.

The Steiners’ deaths were the third and fourth at the park in the past 10 years, the sheriff’s office told CNN affiliate KVIA.

The sheriff said he thinks the Steiners weren’t prepared for the heat and sun they encountered.

“I just think they underestimated the desert,” he said.