PHOTOS: A look inside Mexican drug lord’s prison escape – and how he did it

MEXICO CITY — Mexico’s most notorious drug lord now has one more nefarious title: serial prison escapee. Authorities are scrambling to find Joaquin “El Chapo” Guzman after his stunning escape from a maximum-security prison west of Mexico City on Saturday night. The leader of the Sinaloa Cartel stepped into a shower, crawled through a hole and vanished through a mile-long tunnel apparently built just for him. 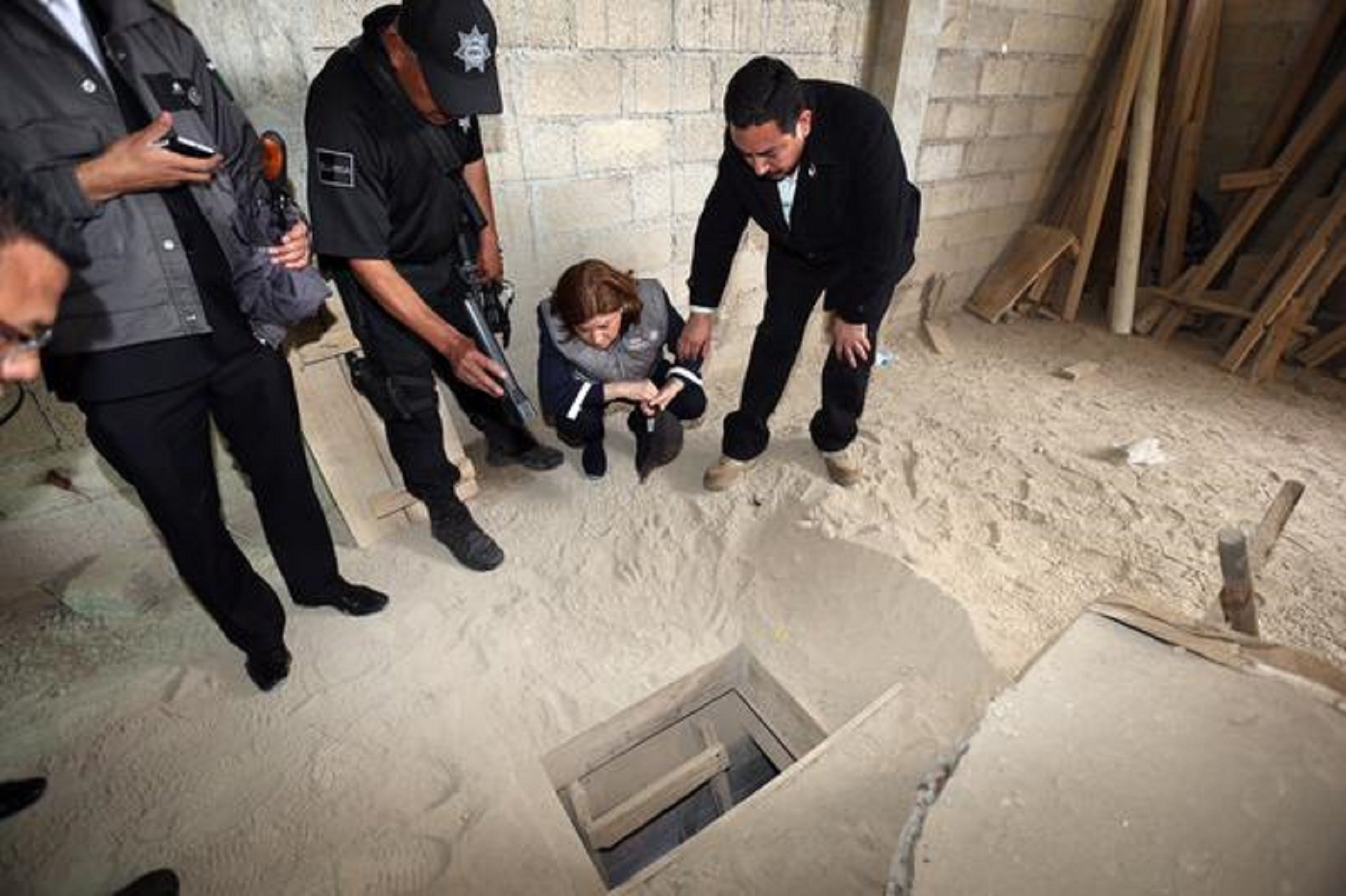 Mexico’s President is livid. So are U.S. officials. And if Guzman gets caught, he could be sent to the United States.

How he did it

Guzman, whose nickname means “Shorty,” has pulled off an elaborate escape from a maximum-security prison before. In 2001, he managed to break free while hiding in a laundry cart. It took authorities 13 years to catch him — sleeping at a Mexican beach resort.

This time, during his escape from Altiplano federal prison in Almoloya de Juárez, he took a much more sophisticated route: a tunnel complete with lighting, ventilation and even a modified motorcycle on tracks “that was likely used to remove dirt during the excavation and transport the tools for the dig,” Mexican National Security Commissioner Monte Alejandro Rubido said.

The tunnel began with a 50-by-50-centimeter (20-by-20-inch) opening inside the shower of Guzman’s cell, Rubido said.

That opening connected to a vertical passageway going more than 10 meters (33 feet) underground. The passageway, outfitted with a ladder, led to a tunnel that was about 1.7 meters (5.6 feet) tall and more than 70 centimeters (28 inches) wide.

The tunnel stretched for about a mile and ended inside a half-built house. From there, Guzman’s whereabouts are anyone’s guess.

“This represents, without a doubt, an affront to the Mexican state,” Mexican President Enrique Peña Nieto said. “But also I am confident that the institutions of the Mexican state, particularly those in charge of public safety, are at the level … to recapture this criminal.”

Mexican authorities said they have brought 18 prison workers to Mexico City for questioning, but it’s unclear how many may have played a role in the escape.

Alberto Gonzales, who was U.S. attorney general under President George W. Bush, said on CNN on Monday that word of the kingpin’s escape must have angered the current attorney general, Loretta Lynch.

The United States and Mexico have worked over the years to cooperate on fighting the drug war, he said, noting that 15 traffickers were extradited to the U.S. in 2007. The arrangement was kept secret, he said.

“We worried about the level of corruption” in Mexico’s law enforcement community and elsewhere, he said.

U.S. officials might have welcomed putting Guzman in a maximum-security prison in the States, Gonzales said, “But there are limits to what the U.S. can do in respecting the sovereignty of another nation.”

U.S. official: We told you so

Guzman has been a nightmare for both sides of the border. He reigns over a multibillion-dollar global drug empire that supplied much of the marijuana, cocaine and heroin sold on the streets of the U.S.

“In addition to his crimes in Mexico, he faces multiple drug trafficking and organized crime charges in the United States,” Lynch said. “The U.S. government stands ready to work with our Mexican partners to provide any assistance that may help support his swift recapture.”

U.S. officials are livid about Guzman’s escape. When he was arrested in Mexico last year, the United States asked to have him extradited, in part because of concerns of a prison escape.

“This is exactly why we argued for his extradition,” a U.S. law enforcement official said, adding that the escape shows “the strength of the cartel and his ability to pay people off.”

“If this guy can get out of prison, it shows how deep the corruption is there,” the official said.

Gonzales said that one of the challenges plaguing the Unites States’ ability to extradite is that Mexico has for years bristled at the notion that its criminals would face a death penalty, or even a life sentence.

Critics have long pointed to the comparatively lighter sentences that those working in the drug trade receive in Mexico, versus sentences doled out to users.

“You cannot build a mile-long tunnel and get into this without some level of corruption,” Grillo said.

Why corruption is so rampant

“Things are just different in Mexico from a legal perspective and a law enforcement perspective than they are stateside,” Cevallos said. “It’s not uncommon, even if you get stopped in the street, to hand over a roll of pesos to be able to go on your way.”

And bribing authorities is even easier when you’re a wealthy kingpin like Guzman. His carefully planned 2001 prison escape allegedly cost him $2.5 million in cooperation, according to Malcolm Beith’s book “Last Narco.”

Yet sometimes, authorities succumb to bribes not out of greed, but out of fear — especially when they’re handling someone as powerful as Guzman.

“It’s estimated that he may have murdered or ordered the murders of more than 10,000 people,” said Tom Fuentes, a CNN law enforcement analyst and a former assistant director of the FBI.

“So this is not somebody who is playing around with prison officials,” he said. “He pretty much controls what he wants to do, and they go along with it. They look the other way to keep their families alive.”

‘He is a complete savage’

“He is a complete savage,” Fuentes said. “What they do, and how they do business, is based on complete terror. … They kill journalists, politicians, police officers, corrections officers. And then not just that person, but every member of their family.”

The Sinaloa Cartel moves drugs by land, air and sea, including cargo aircraft, private aircraft, buses, fishing vessels and even submarines, the Justice Department has said.

The cartel has become so powerful that Forbes magazine listed Guzman among the ranks of Bill Gates and Warren Buffett in its 2009 list of “self-made” billionaires. Guzman’s estimated fortune at the time was $1 billion.