RICHMOND, Va. -- One day after Virginia Governor Terry McAuliffe said he did not support a petition to remove statues of Confederate figures from Richmond's Monument Avenue, someone vandalized the statue of Jefferson Davis, the president of the Confederacy. The phrase "Black Lives Matter" was seen painted on the statue Thursday morning. Richmond Police had no comment early Thursday morning about the vandalism. 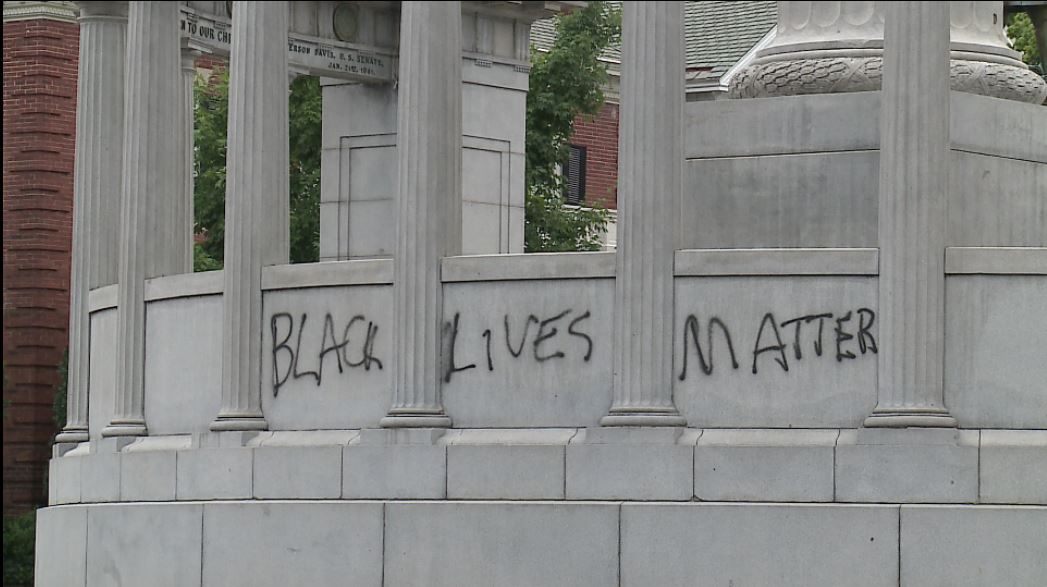 "These statues are a form of subliminal and institutional racism and must be removed," the petition stated. More than 400 people have signed the petition as of Thursday morning.

Earlier this week, Governor McAuliffe ordered all Virginia license plates with the Confederate flag come off the road. He called the symbol too divisive and hurtful. But he said statues, roads and schools named after Confederate leaders are reminders of our history that should remain.

Group demands UCI Worlds be moved off Monument, ‘a virtual shrine to the Confederacy’

The Defenders, a group of Virginians who work for the “survival of our communities through education and social justice projects” have asked Virginia leaders to change the course of the upcoming UCI Road World Championships (Worlds) bicycle race. The group does not approve of the course which highlights Monument Avenue which it calls “a virtual shrine to the Confederacy.” The group also said the race “disrespects Shockoe Bottom, for decades the epicenter of the U.S. domestic slave trade.”

The group detailed its concerns in an open letter to Richmond 2015, Virginia Governor Terry McAuliffe, Richmond Mayor Dwight Jones and other leaders.

“These steps will, I hope, make clear that this Commonwealth does not support the display of the Confederate battle flag or the message it sends to the rest of the world,” Governor McAuliffe said.

Concerning the bike race, the governor said “No, were aren’t gonna change any monuments or move the bike race.”

“The license plates were made available at the request of the Sons of Confederate Veterans, and have been in use with no issues for 12 years,” Flaggers spokesman Grayson Jennings wrote in an email. “The organization is made up of citizens of the Commonwealth who can trace their lineage directly to an ancestor who was a Veteran of the Confederate Armed Forces. Members work, live, and worship every day alongside men and women of every race, creed, and color, and there have been no reported incidents of anyone being harmed by the license plates, or any disturbances caused by their use.”