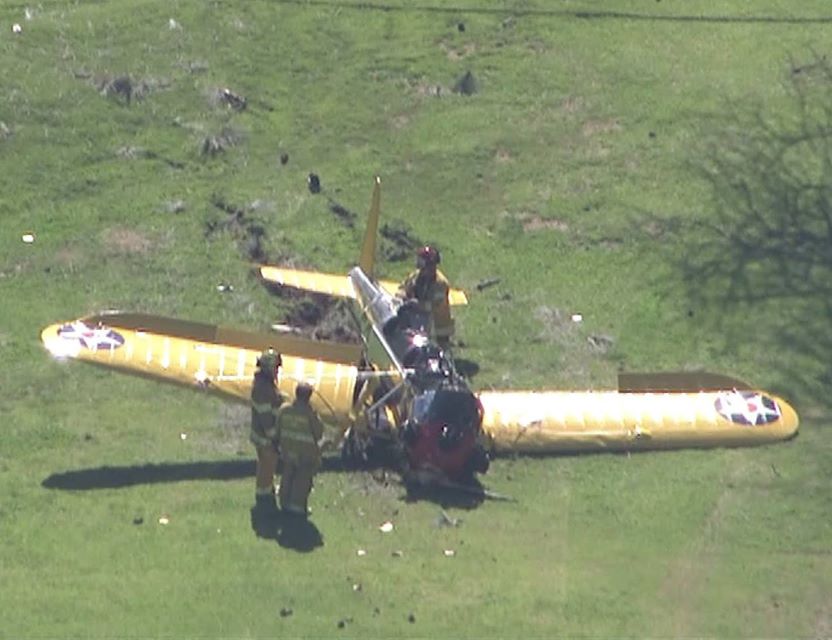 VENICE, Cali. — The solo occupant of a small plane, who crashed at a city golf course in Venice, suffered injuries and was transported to the hospital. The plane crashed in the afternoon at the Penmar Golf Course, according to the Los Angeles Fire Department. Actor Harrison Ford was piloting the vintage World War II training plane that crashed, TMZ and NBC News reported.

A golf course employee told a NBC news affiliate that there was “blood all over his [Harrison Ford] face.”

The extent of the 72-year-old actor’s injuries are unknown for sure. He was conscious and in fair to moderate condition when he was transported, officials said.

“I’ve been on [scene of] several single engine crashes … and normally the outcomes are fatalities,” said Los Angeles Fire Department Assistant Chief Patrick. Authorities did not confirm at the press conference that it was Ford who was piloting, only that it was a 70-year-old man.

At the hospital. Dad is ok. Battered, but ok! He is every bit the man you would think he is. He is an incredibly strong man.

No one else was injured, said Erik Scott of the Los Angeles Fire Department.

Pictures of the crash were aerially captured by CBS 6 affiliate KTLA. Witnesses reported hearing an engine problem, but no federal agency could confirm at this point in their investigation. Audio was released, and at the 21:21 mark you can hear a pilot call for engine failure.

The plane hit a tree as it landed, officials said. It landed on its belly with the left wing touching the ground. There is a mark in the ground behind the plane where the aircraft sliced into the grass.

Authorities held a press conference shortly thereafter and said that the Federal Aviation Authorities and the National Transportation Safety Board are investigating the crash and expect to be at the scene of more than a day.  The NTSB said the plane was a Ryan Aeronautical ST3KR.

Ford’s publicist said Thursday night that the legendary actor is expected to make a full recovery after crash-landing a small plane in California earlier in the day.

“Harrison was flying a WW2 vintage plane today which had engine trouble upon take off. He had no other choice but to make an emergency landing, which he did safely. He was banged up and is in the hospital receiving medical care. The injuries sustained are not life threatening, and he is expected to make a full recovery,” said Ina Treciokas.

It is not the first crash for the star of the “Star Wars” and the Indiana Jones film franchises. In 1999, he had to make an emergency landing in a California riverbed while flying a helicopter.

The incident is also not the first time an aircraft crashed at the golf course. In 2010, a 60-year-old male student pilot died when the plane he was flying crashed into the city-owned facility, the Santa Monica Mirror reported.