PETERSBURG, Va. — There is a lot of trouble headed to Petersburg, big, big trouble. Big Trouble Malting and Spirits announced Wednesday it would open a malting facility and craft distillery in Petersburg. The new distillery, which will create nine jobs, will purchase its  barley, wheat, rye and fruit from Virginia farmers.

“Big Trouble brings together multiple aspects of economic development – agriculture, entrepreneurship, manufacturing, tourism, and community revitalization – in one operation and is another excellent example of leveraging some of the Commonwealth’s greatest assets to build a new Virginia economy,” Virginia Governor Terry McAuliffe said in a statement. “Virginia’s status as a world-class wine, cider, beer, and spirits producer is rising and we aim to raise it even higher.” 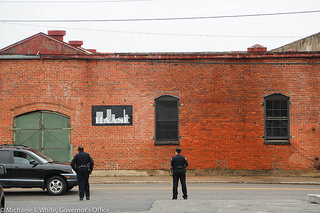 Big Trouble Malting and Spirits co-owner Dave McCormack called Petersburg the perfect place for the malting facility because its so close to “ideal farmland.”

“I’m thrilled to help develop this business in Petersburg — it’s a great addition to the neighborhood, and a great win for downtown,” McCormack said.

In addition to producing its own malts and spirits, Big Trouble will sell malts to local brewers, the governor’s office indicated.

“Big Trouble’s investment is exciting not only for Petersburg and the Commonwealth’s fast-growing craft beer and distilled spirit industries, but also for Virginia agricultural producers who are capitalizing on new or expanded markets for their harvests,” Secretary of Agriculture and Forestry Todd Haymore said. “With more than 260 wineries and cideries, 100 craft breweries, and 20 craft distilleries, Virginia is quickly emerging as a significant craft beverage player on the East Coast.”

“Our goal is to support Virginia craft brewers, and create an operation where growers can confidently raise barley and other alternative crops for the craft beer industry,” Big Trouble Malting and Spirits co-owner Tony Kvasnicka added.