CHESTERFIELD COUNTY, Va. -- One person was killed after a minivan slammed into a house in a Chesterfield neighborhood Thursday evening. The minivan was traveling west on Robious Riad when it veered off the road and hit a snow bank at a high speed, police said. The van went airborne and plowed through a home in the 1700 block of Greenfield Drive around 6 p.m. The homeowner was killed. Fire investigators do not know if the victim died when he was struck by the minivan or when part of the home collapsed. Two neighbors, who were in their backyards at the time of the crash, heard the impact.

“We heard revving engine, a big loud screech and a big crash. We saw smoke coming out of the yard," neighbor Jeff Duncan said.

Duncan said when he reached his neighbor's backyard, he spotted the female passenger motioning for help.

“She thought the gentleman who was driving the car was having a stroke and his foot got caught on the accelerator,” Duncan said. "They went across a lane of traffic and into the guy's house."

Jay Pettit, another neighbor who rushed in to help, was saddened by what he saw.

"We saw half of the house was missing and there was a car in the backyard,” Pettit said. "Imagine just being in your home and the something like this happens. It’s a horrible thing.”

Chesterfield Fire and EMS spokesman Lt. Jason Elmore said that the driver and passenger were transported to area hospitals with what were described as minor injuries.

Crews worked late Thursday to shore up and reinforce the house so investigators could gain access.

“We’re making it as secure as possible for us to be able to get in there as part of the investigation as well as to remove the resident from the home,” Elmore said.

Wreckage from the tragedy was strewn around the victim's backyard.

“It completely destroyed the man’s kitchen. There were appliances in the backyard," Duncan said. "It collapsed the man’s back porch. It’s a good amount of damage to the house.”

Police have not released the identity of the victim.

Stay with WTVR.com and CBS 6 News for updates on this important local story. 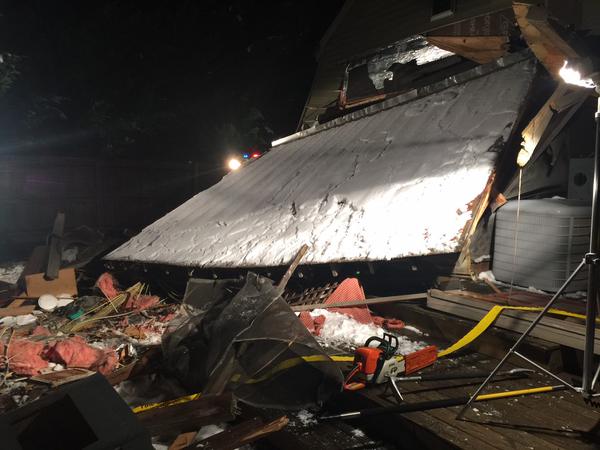