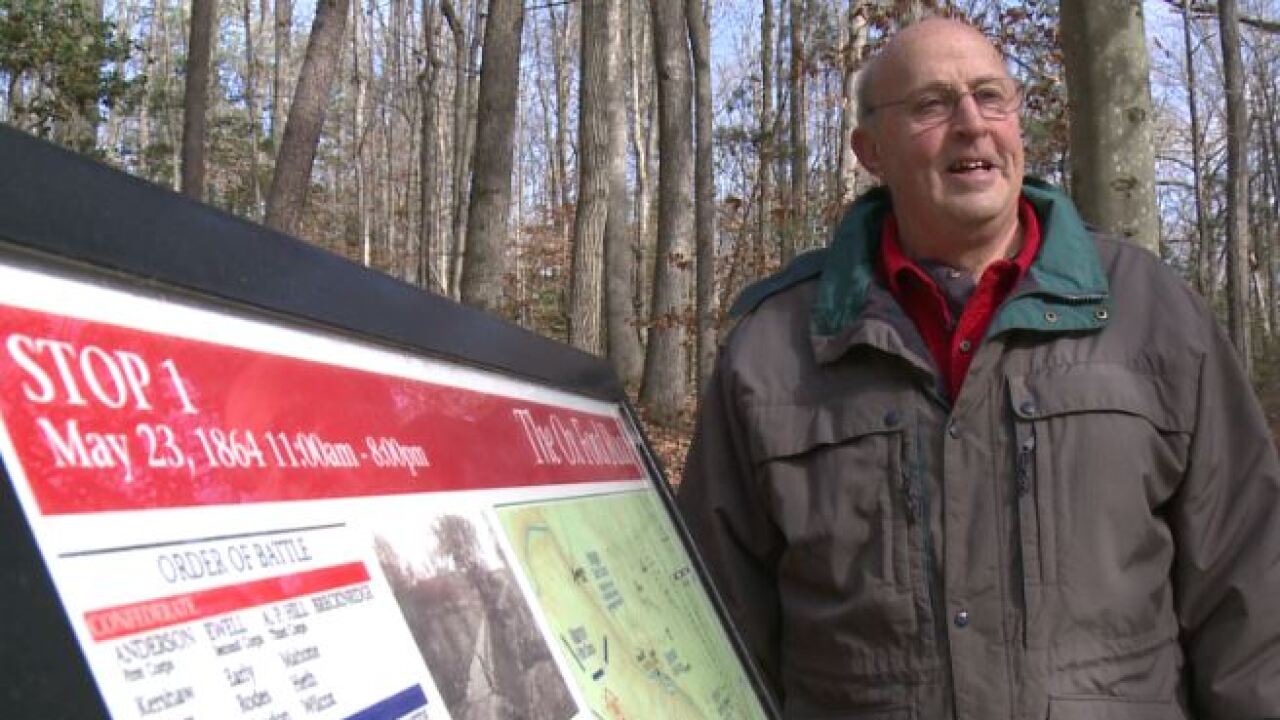 HANOVER COUNTY, Va. -- Just north of Richmond there is a race to save our heritage, and one man is leading the charge.

Art Taylor is as passionate about Central Virginia's history as anyone. He said the past does not exist in textbooks with endless names and dates, rather it lies right under our feet.

On a recent day when the temperature barely made it out of the 20’s, most people stayed indoors, but not Taylor.

"This is a hidden jewel. I try to advocate, if you would, for history," Taylor said. "I learn something new every time I come here.”

Taylor has been instrumental in preserving a large swath of land where thousands of men clashed and died.

He said the North Anna Battlefield Park is hallowed ground and deserved to be saved. Inside the park, you find miles of trenches and artillery pits dug more than 150 years ago. Taylor called the park an outdoor classroom and living monument to the men who fell here.

"There were thousands of men that dug these things and took these positions and prepared to die," he said. "It makes the hair on the back of my neck stand up."

North Anna Battlefield Park, off Route One, is one place Taylor helped save. In May 1864, armies led by Generals Robert E. Lee and Ulysses S. Grant clashed here. Thousands of soldiers were killed or wounded in the short, but savage battle.

What the blue and gray left behind was a vast network of trenches, artillery and rifle pits. Pristine earthworks, Taylor said, worth preserving.

"This is the place where the action took place," Taylor said. "This is where men fought and died, in that bottom."

Taylor worked with Martin Marietta, a company that owns a quarry located on a large part of the battlefield, and convinced the corporation to donate 90 additional acres of property. The move doubled the size of the park which is now owned by the people of Hanover County.

“I’m delighted it's going on. It is great," Herbert Jones, Vicar of Church of Our Savior in Hanover County, said. "I think of the terror that the soldiers went through during the war. People fought and died here. Whatever the cause it is worth preserving."

While Taylor was quick to deflect credit, Director of Hanover County’s Parks and Rec Greg Sager  called Art a treasure for giving so much of himself.

"He deserves every accolade he gets." -

"He deserves every accolade he gets," Sager said. "All of the work that the Parks and Rec has done would not be possible without Art. His guidance."

"This is history. This tells us something we should learn from," Taylor said.

A place history buffs and novices alike can follow in the footsteps of the past and maybe rub shoulders with the man who helped save this sacred place.

"I hope it is here forever. I’m going to do everything in my short lifetime to stay like it is," Taylor said.

The North Anna Battlefield Park is located at 11576 in Doswell just off of Route 1.