HOLMBERG: Why did ‘nobody is born gay’ group pick Richmond for billboard? 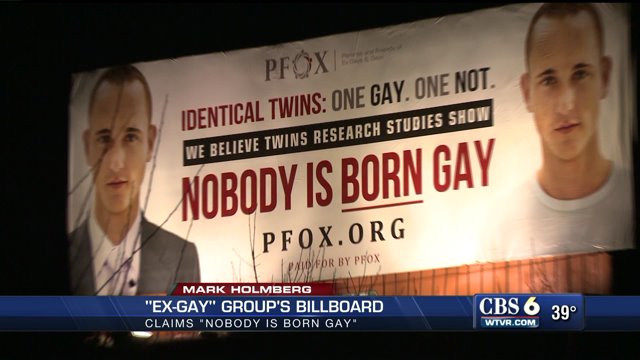 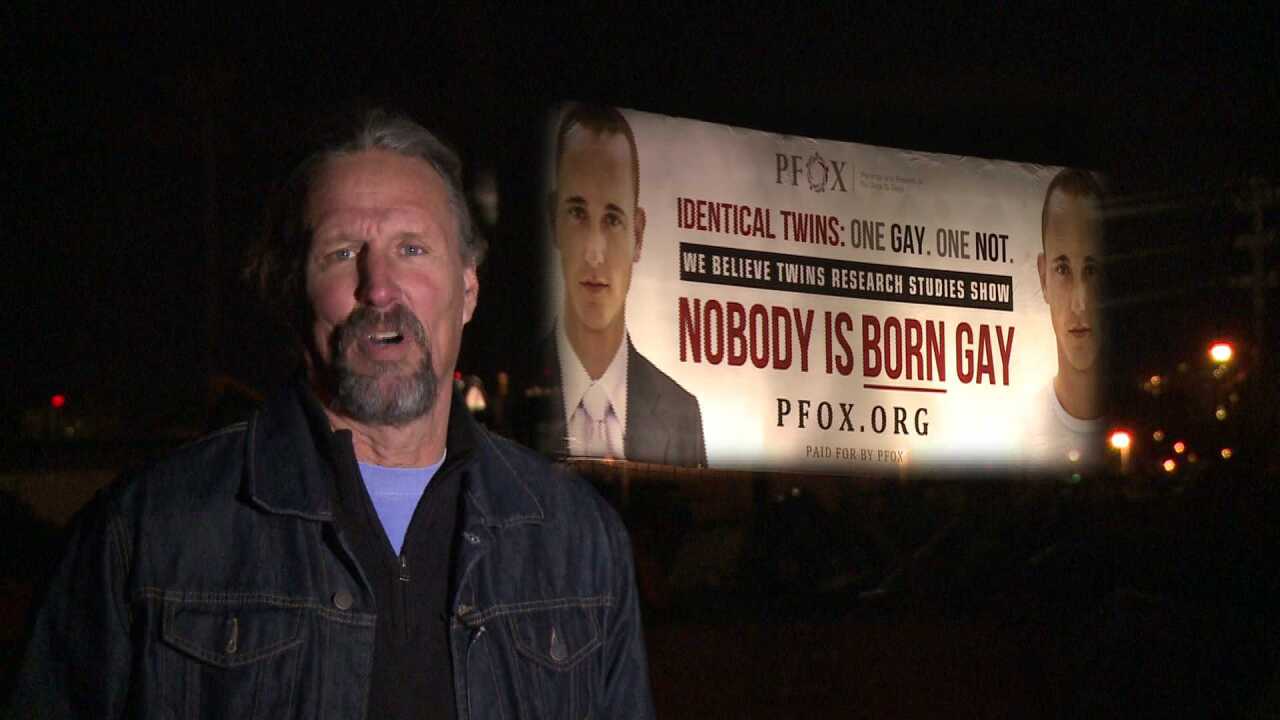 RICHMOND, Va. -- It’s a big, brightly-lit billboard in downtown Richmond on Interstate 95 - one of the busiest freeways in this part of the world - proclaiming that “nobody is born gay” in man-sized letters and claiming a scientific identical twin study proves it.

This is a key cultural intersection in the world of sexual orientation.

Many gays and advocates say they are born that way – it’s genetic and therefore quite normal – and some cite the exact same identical twin study as proof.

Often colliding with this view at this precise cultural intersection is the belief people “choose” to be gay or are made that way due to experiences and pressures as youths, and that it’s something that can be treated with therapy.

It’s the old nature-versus-nurture bone that human behavioralists and philosophers have been picking at since before Darwin.

The bold billboard – paid for by a controversial national group with ties to Liberty University that believes in “reparative therapy” for homosexuality - takes an in-your-face stand on the nurture side of the fence.

Richmond-based women’s and gay rights advocate Sally Mullikin was sickened by what she sees as a hateful message, as well as angered that Lamar Advertising of Richmond accepted the ad.

"To think that an advertising agency would hang a billboard like that over one of the largest gay communities in the state is appalling."

“Disturbing, it really is,” she said. “To think that an advertising agency would hang a billboard like that over one of the largest gay communities in the state is appalling.”

She said she believed advertisers have an “ethical responsibility” in limiting controversial speech in ads. It’s not a free-speech issue, she said, but one of ethics.

And she said she believed the group that paid for the ad – Parents and Friends of Ex-Gays and Gays (PFOX) – is just too hot to handle. While PFOX hasn’t been labeled as a hate group by the South Poverty Law Center, Mullikin said, groups PFOX associates with are on that list.

“They’re guilty by association,” she said, adding that the sign must come down.

Jamie Machut, vice president of Lamar of Richmond, said Wednesday the sign would stay up as long as it’s paid for, at least until early January.

"We support the First Amendment right of advertisers."

“Please keep in mind that the advertisement is a message from PFOX and not Lamar Advertising Company,” he said in a statement. “We support the First Amendment right of advertisers and believe that it is in the best interest of our company and the communities we serve to accept advertising copy openly. We do not accept or reject copy based upon agreement or disagreement with the views presented. We are firmly committed to our policy.”

Already there have been rumors of vandalism to the billboard, which reportedly happened to other signs posted by PFOX in the Washington subway tunnels two years ago. PFOX sent out a statement about the alleged vandalism here in Richmond.

But I saw no evidence of it here.

“There’s so many individuals in Virginia that need help to understand the real underlying issues of the causes of homosexuality,” said David Pickup, advisor to PFOX’s board and a therapist who says he was successfully treated for homosexuality.

He said the buzzword of the day is tolerance, and he said he believed everyone should be tolerant of different viewpoints in terms of the causes of sexual orientation and possible treatments.

I asked him about the American Psychological Association’s endorsement of homosexuality as a healthy, normal orientation and their dim view of therapy as a means to change it.

“Yes, they do,” Pickup said. “And it’s troubling because they assume that all of us who do this authentic reparative therapy – not the junk that you hear about on the internet and various other medias . . . believe that homosexuals are all mentally ill and they have to change and nothing can be further from the truth ."

Both sides of this sexual orientation genetics-versus-environment issue (nature-versus-nurture) accuse the other side of misrepresenting the oft-cited identical twins study done by Northwestern University’s Dr. Michael Bailey. In part, that study looked at the common phenomenon of one identical twin being gay and the other not.

Bailey has said both sides have missed the key messages of the research – that it’s not that clean-cut.

Such is the nature of this cultural intersection where the big sign stands. It’s shaky ground.

“In my opinion, there’s room for both voices,” Pickup said when I asked him about their interpretation of the twins study that supposedly anchored their message. “One, if you want to believe that you’re gay and born that way, ok, you have a right to do that. But if you believe that, no, there’s a causation there, there’s something that can be changed, that voice deserves (to be heard) as well.”