Check out who your neighbors voted for on Election Day 2014 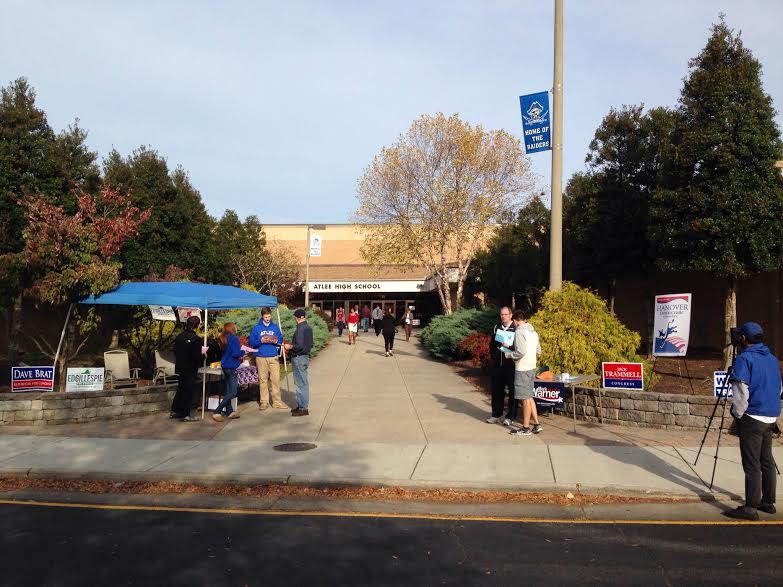 RICHMOND, Va. — Voters were heading to the polls across Central Virginia on Tuesday morning to select their next U.S. senator and to cast their votes in their district’s congressional races.

In the senatorial election Sen. Mark Warner (D-Virginia) is running for re-election to a second six-year term. He is challenged by Republican Ed Gillespie and Libertarian Robert Sarvis.

In the 7th Congressional District Republican Dave Brat, Democrat Jack Trammell and Libertarian James Carr were running for the seat of former House Majority Leader Eric Cantor, who was defeated by Brat in the Republican primary. Rep. Bobby Scott (D-Virginia) was running uncontested in the 3rd District.

Reporters of VCU’s “iPadJournos” project interviewed voters at the polls in the city of Richmond as well as in Henrico, Hanover, Chesterfield and Powhatan counties on their favorite candidates and their expectations for the election outcomes.

Read in the following parts how voters in Central Virginia made their decisions at the ballot box.

Voters at the polling station at George Washington Carver Elementary School in the city of Richmond expressed their concerns over the scandals of the senatorial candidates and over the lack of support Republicans in Congress show for President Barack Obama.

“I just want to see the president get some support,” said Vernon Allen, who is an aquatic director at a local Boys and Girls Club. Allen also said that Republicans in Congress always do the opposite of Obama.

“I think if Republicans take over Congress, we’re going to be in for a whole lot of trouble,” said voter Ridley Daniel. “The Republicans shut down Congress. They eliminated several key votes that we needed for passing (bills). And they still want to keep their money in their pocket.”

Diane Square, who is currently looking for a job, also criticized Republicans in Congress. “I think there was a lot of trickery with the Republicans with the things they’re doing to try to be re-elected. They try to put all the blame on the president. The House (of Representatives) and the Senate should be kept accountable for the things that they’ve done,” Square said.

Voter Josh Harmon focused on social issues and was also concerned about Gillespie working for the energy company Enron in the early 2000s. “I want a candidate to promote social equality, also some financial equality and generally more progressive views,” Harmon said. “You have to pick between the lesser of two evils every time. This time I went with Mark Warner. I think he will more likely uphold some of the gay rights.”

Engineer Peter Moliterno disagreed with other voters at the polling station and was worried about Democratic politicians and the work of the Obama administration. “They probably won’t do very well in this district, but my vote counts like everybody else’s in the state,” said Moliterno, who hopes that Republicans will sweep the elections. “This is the worst president we’ve ever had. Anyone who can slow him down or stop him has my vote.”

Voters interviewed at Ruby F. Carver Elementary School in Henrico County said they voted for various candidates, but most of them expected a close race between Warner and Gillespie. Dominion Power employee Karim Siamir thinks that the midterm elections are very competitive. “Based on what I see, it’s going to be tight, but I hope the Democratic party will hold the senate,” Siamir said.

Retiree Judy Sanderson, who didn’t share her vote, agreed. “I think it’ll be very close. All of the candidates have really good issues,” she said and added that voter participation would be a big factor in the election outcome. “I guess it’s just a matter of if enough people will come out and express their feelings about each of the issues,” Sanderson said.

Wanda Mills, who works in personal finance, said she voted for Gillespie. “He’s not typically indicative of a Washington politician. I believe we need a fresh face [in] Washington,” said Mills. “I don’t want someone who’s the incumbent going back up there and doing the same thing.”

Richard Overstreet, a gym owner, voted for the Democratic ticket, but thinks that they will likely lose nationally. “I think there will probably be a lot of change, and I think the Republicans will probably take it back,” said Overstreet. Marsha Sorg, a call center employee, echoed that prediction. She voted for Gillespie, simply for a “change.”

Voters at Hanover County’s largest polling location at  Atlee High School in Mechanicsville, cast their votes based on candidates’ standpoints on the federal debt and spending, women’s issues and healthcare.

“I like smaller government, its gotten too big,” voter Jeff Gerhart said. “We’ve got so much debt, at some point there’s going to be a breaking point.” Voter Jim Landes is worried the government spending is out of control. “I get so tired of people saying ‘Aww, but the federal government will pick up the bill,'” he said.  “But that’s my money.”

Voter Sumita Carpenter worries that women’s rights are being “trampled upon” and would like to see a “more progressive route” for the next Congress.  But just as important to Carpenter is the issue of jobs for future generations. “I think we need to start training all of our kids to find a job, whatever that may be,” Carpenter said. “One way or another we’re going to have to make revenue.”

Courtney Creasy would love to see a woman on the ballot, something she said is missing on this year’s midterm election ballot in Hanover, but it isn’t the only factor for her. Creasy said she wants politicians to focus on political issues instead of television-ad bashing and social issues. “In this day in age, we need to let go of the social issues and those need to not drive our politics,” she said.

Voters interviewed at J.B. Watkins Elementary School in Chesterfield County are hopeful that the Republicans will regain full control of Congress. Voters felt that there needs to be a serious change in the way politicians are handling things in Washington. “I voted for all Republicans, because the Republicans need to take the Senate back,” said Heidi Burleigh, a tomography technician. “Democrats have done too much damage in the last eight years.”

Elizabeth Schurlknight, a retail manager, voted for all Republican candidates. “Hopefully Republicans across the board,” said Schurlknight. “I voted Democrat one time, in my first time voting in 1976 for Jimmy Carter, and I learned my lesson then.” Minister Adam Evans said, “Gillespie, Brat, and Hughes. Reason why, I’m concerned about where America is going at this particular point, and I feel like we actually need real change.”

Jeff Green, a retired businessman said, “I voted for Brat, because quite honestly the direction of the country under Obama and his cronies, has just been so destructive. Economic issues are still terrible after six years.” Green said that scandals throughout the last few years have determined the direction of his voting this election day.

“I voted for Ed Gillespie,” said David Humphrey, an electrical engineer. “We need a change. Warner is not from Virginia, he doesn’t understand Virginia values, he’s a Connecticut yankee that’s come down here and he’s carrying his liberal policies through Washington that don’t reflect Virginia.”

George Akoto, a manager at Food Lion, disagreed with other voters at the polling station. “I voted for Mark Warner, the reason being that with today’s politics, it is easy to fall into the cracks. I have read about all of the candidates extensively and one thing that sticks out is the politics need to be stopped,” he said. “Mark has done a great deal of work for Virginia when he was governor and then in the Senate, so knowing those facts, nothing was going to change my mind,” said Akoto.

Voters interviewed at the Company #1 Volunteer Fire Department in Powhatan County agreed things in Washington need to change and heavily voted for the Republican candidates in hopes to trigger change.

David Bailey, a government contractor, said he checked Gillespie’s name, because he is “the lesser of two evils.” Waitress Julie Hackman, on the other hand, said she voted for the names she heard the most on radio and TV ads.

Many voters talked about wanting significant change for the country, and voiced their disapproval for President Obama and the increasing federal debt. Mike Crist, a retail salesperson sporting a patriotic tie for Election Day, said he voted Republican for both the senate and 4th Congressional District. “We need change that you can really jiggle in your pocket,” Crist said.

Retiree Velma Allen said about the Republican candidates that she believes that “these gentlemen can take our country where we need it to go.”

Ashley Fisher, a student at Liberty University who handed out Republican sample ballots outside  the polling station, said she isn’t happy with the direction the country is going in. “So I feel like the Democrats need to be reminded of who they’re really representing as well as any other politician,” Fisher said.

Just a few blocks from the Randolph-Macon College campus in Hanover County, Ashland residents were voting at Fire Station #1 for one of the two professors running for the District 7 congressional seat. Many voters came the polling station wearing R-MC apparel.

Lee Paul, an Ashland resident of more than 20 years and a R-MC alumnus, said he now lives near campus on College Avenue and considers both Dave Brat and Jack Trammell as ‘good friends.’

“The most interesting thing about the election has been at The Strawberry Festival,” Paul said. “When Cantor showed up with his entourage of secret service and state police and Dave Brat was there by himself, I was so proud of Dave for having the chutzpah to do this. I thought my vote was entirely wasted in the primary.”

Hali Johnson, an R-MC senior studying archaeology, Greek and Latin, said the fervor on campus surrounding the Brat-Trammell election has not exactly translated into registered student voters. Choosing to visit the polling station early in the morning to cast her vote, Johnson said she first met Trammell as the director of the Honors College after she was invited to join the program.

“When Jack Trammell was added to the ballot, I registered to vote as soon as that was announced,” Johnson said. “Some people and professors think that education funding should be cut, which is a little odd. So that made the vote pretty easy.”

Other voters said concerns over the Affordable Care Act, student loan debt, minimum wage and entitlement programs were the biggest issues in this election in Ashland.

Polls will be open until 7 p.m. on Tuesday. To determine your assigned polling station and find detailed information about the election process, click here.

This story was reported by Maya Earls and Grant Wilging from the city of Richmond; Ali Mislowsky and Shakola Walker from Henrico; Michael Melkonian, Abeed Rahman, Chris Suarez, Eric Arthur and Victoria Zawitkowski from Hanover; Nicole Czaja, John Hussar and Brianna Graves from Chesterfield; Rachel Mahoney and Lorrie Hare from Powhatan. These student reporters are part of the “iPadJournos” mobile and social media journalism project, a cooperation between WTVR.com and VCU’s Richard T. Robertson School of Media and Culture.