RICHMOND, Va. — While still behind Sen. Mark Warner (D-Virginia) in the latest polls, Republican senatorial candidate Ed Gillespie has gained a larger following on social media than the incumbent. Gillespie was leading the Democratic incumbent in terms of Facebook LIKES as of Friday.

The challenger also led by more than 25,000 followers on Twitter over Warner. Libertarian candidate Richard Sarvis was head-to-head with Warner on Facebook and led him on Twitter. 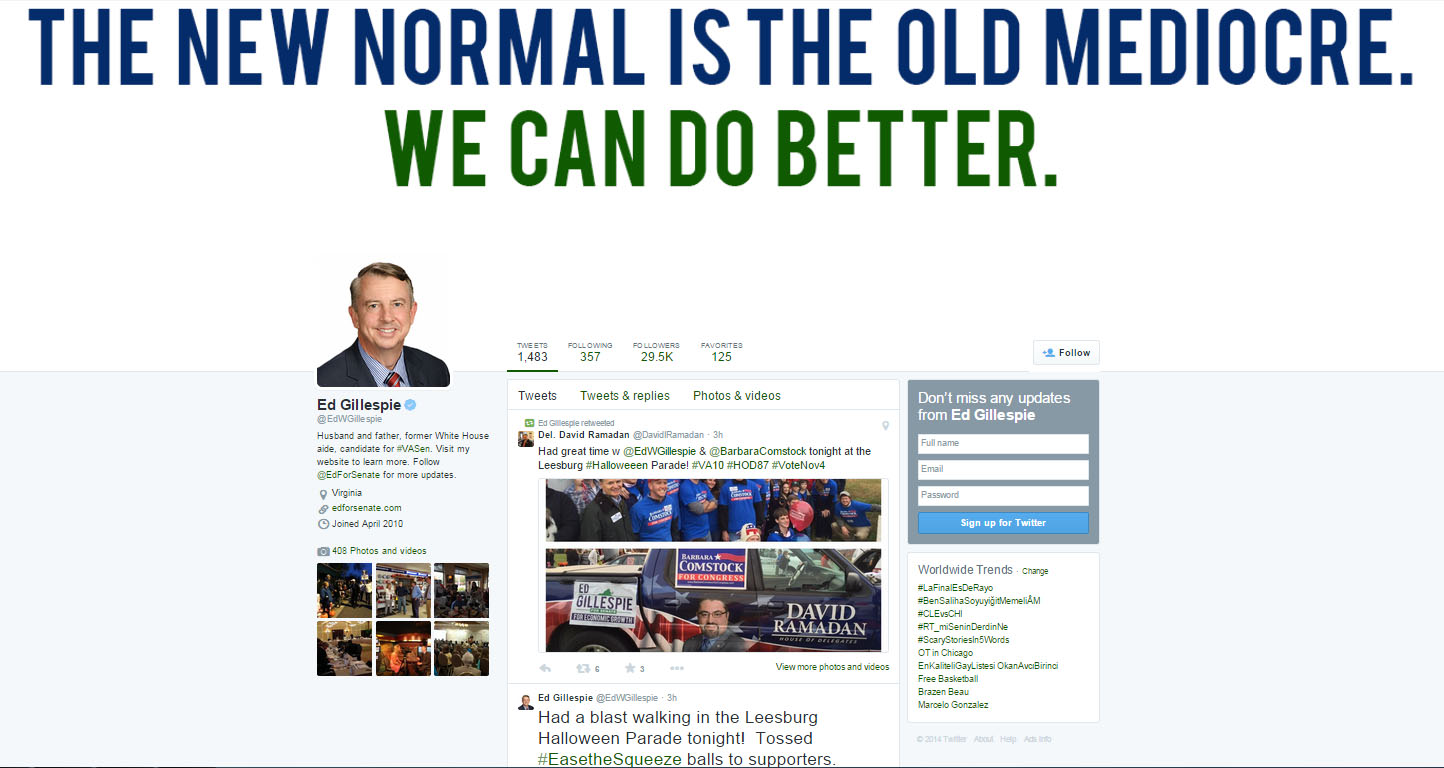 “Candidates’ reliance exclusively on direct mail and on TV just doesn’t play these days,” said David Saunders, president of the marketing agency Madison+Main. He believes that older forms of political marketing are being pushed by the wayside in favor of social media usage and that campaign efforts need to adjust to the current times.

“One of the things we make sure to do is that we’re not just broadcasting our message on social media, we’re asking other people to share and spread it as part of our grassroots effort,” said Eric Wilson, digital director for Gillespie’s campaign. “I think social media is a necessity. It’s one of those platforms that there’s so many people engaging on it, that you have to meet voters where they are.”

The Gillespie campaign even met one in person as a result of an organized Twitter engagement session.

“We did a Twitter takeover of the College Republican National Committee account, where for about a half hour we took questions from college students and young adults across the country,” Wilson said. One person tweeted them asking for a pre-file form and within 45 minutes one of Gillespie’s field staffers met the voter at home to collect the form.

“That’s an interaction that would not have been possible without listening very carefully to what people are saying about us on social media, and integrating responsiveness with digital communication throughout our campaign,” Wilson said.

But Saunders also praised Sen. Warner’s social media efforts, whose campaign did not respond to an interview requests for this story. Saunders said that he applauds the efforts of Warner tweeting from the senate chambers and that he followed people back on Twitter. On the other hand, he said the campaign of former gubernatorial candidate Ken Cuccinelli in 2013 was “terrible” at using social media.

“Literally it was just a feed of political sentiment over and over, saying the same thing every single day. It really didn’t do them any good, because they were ‘preaching to the choir,’ which the far-right fringe of the [Republican] party,” Saunders said. “Social media is really meant to engage everyone, and that’s where candidates can win. Candidates don’t win unless they win the ‘middle.’ Social media is a way to engage the ‘middle.’”

Social media platforms do not only play an important role in the statewise race, but also in the campaigns for the congressional seat in the 7th district where Republican David Brat, Democrat Jack Trammell and Libertarian James Carr run for the former seat of Eric Cantor.

“Engaging in social media is a great way to reach voters at low cost and to make sure we can talk to people directly, free of someone else’s filter,” said Brian Gottstein, communications director for Brat’s campaign.

“Facebook allows us to create big visuals and share articles with ease and speed. It also provides a great way for supporters to engage with us. We like to hear what they have to say. We have a small staff, so we can’t be everywhere,” Gottstein added.

Liz Flowers, media coordinator for Trammell’s campaign, said that social media came to the forefront during the 2008 presidential elections. Because of that, college students have more of an opportunity to interact and become knowledgeable about political candidates.

“Hopefully, social media is a platform that helps students engage,” Flowers said. “Because of class schedules or project schedules, they might not be able to get on in a nine-to-five setting, but they might be able to check it out at 11 at night, and that’s the beauty of social media. It’s available when people are.”

Joe Jamerson, marketing director for Carr’s campaign, said that third-party campaigns are at a disadvantage compared to major party campaigns when it comes to involvement in speaking engagements and debates. Therefore, the use of social media is crucial to their success.

“The truth is a lot of media outlets, like for interviews and things like that, they weigh how well your social media is doing. Whether or not you’re worth their time,” Jamerson said.

“Political marketing is like event marketing—it’s relatively easy compared to what retailers have to do,” Saunders said. “Retailers are open 300 days a year and they have to get everybody to the store every day. The candidate just needs to get somebody to show up on Tuesday, Nov. 4. So you only have to get them to show up to the ‘store’ one day.

“If those candidates are participating in honest discussions with people about the issues, then that’s wonderful. But for the most part, they’re not and they’re just using [discussions] as mouthpieces to spread out propaganda, which is the same thing they’re doing on TV and on direct mail,” Saunders added, who also stressed that social media is “a place where you’ve got to be real.”

Saunders views social media advertising, such as promoted posts on Facebook and Twitter, as an effective campaign tool. “For the cost, [a promoted post] is probably the most cost-effective form of marketing out there right now,” Saunders said.

The impact social media platforms have had on this year’s races will be shown when the votes are counted on Tuesday night. Polls will be open from 6 a.m. to 7 p.m.

By Grant Wilging and Maya Earls (Special to WTVR.com)