One of four students injured when a freshman opened fire in a Washington high school cafeteria has died, bringing the death toll to two.

Three others remain hospitalized from the Friday shooting at Marysville-Pilchuck High School.

Gia Soriano, 14, who had been in critical condition with head injuries, succumbed to her wounds, the Providence Regional Medical Center said late Sunday night.

Witnesses say Jaylen Fryberg, a popular freshman, opened fire Friday in the crowded lunchroom at the high school, about 34 miles north of Seattle.

He killed one student at the scene and injured four others before taking his own life, authorities said.

“We are devastated by this senseless tragedy,” Gia’s family said in a statement. “Gia is our beautiful daughter and words cannot express how much we will miss her.”

The family will donate her organs.

Of the other three who remain hospitalized, Shaylee Chuckulnaskit, 14, and Andrew Fryberg, 15, are in critical condition. Nate Hatch, 14, is in serious condition.

Andrew and Nate were Jaylen’s cousins.

The boys were close friends, nearly inseparable, Don Hatch, Nate’s grandfather, told CNN affiliate KOMO. They even went to a school dance together recently, where Jaylen was named the freshman class homecoming prince.

‘Only God knows’ why

Students, parents and school leaders met inside the gym at Marysville-Pilchuck High School on Sunday to remember, mourn and talk about ways to move forward. Students and parents were separated for private discussions.

“Only God knows what escalated this. Only God knows,” Hatch said, according to KOMO. “Nobody pushed a button with bullying. It’s just something that happened, and we don’t know why.”

Hatch said he forgives Jaylen and plans on visiting his family. 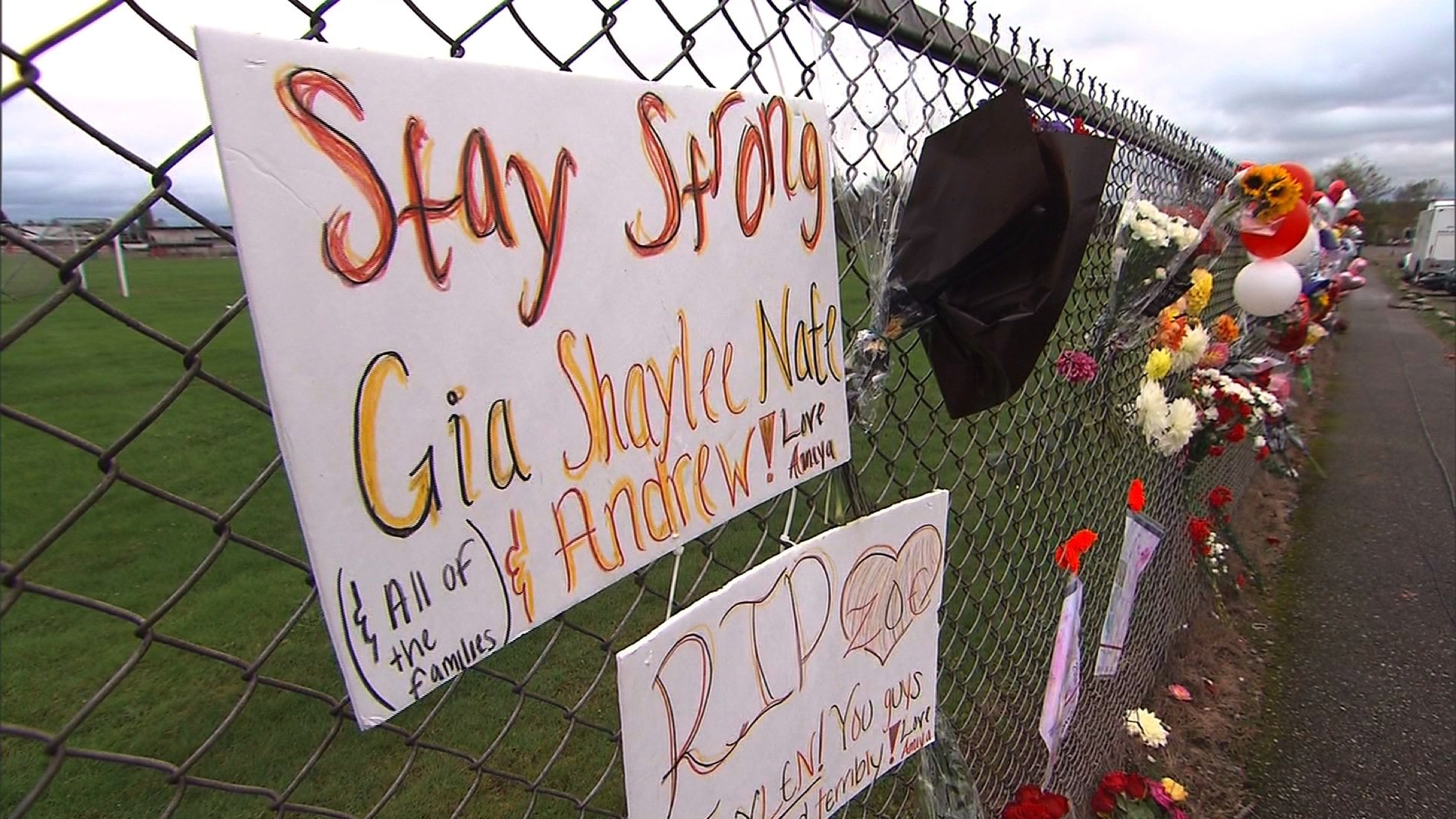 Investigators in Marysville have not provided details, but students offered up accounts that painted a terrifying, chaotic picture.

Fellow student Jordan Luton was finishing his lunch in the cafeteria when he heard a loud bang.

He saw Jaylen go up to a table of students, “came up from behind … and fired about six bullets into the backs of them,” Jordan told CNN. “They were his friends, so it wasn’t just random.”

According to a law enforcement source, witnesses said Jaylen pulled the gun out of a black backpack before he began firing.

Witnesses described the look on his face as calm, said the source.

There may have been more victims but for the bold actions of a young teacher.

Megan Silberberger, a teacher, was in a nearby office when she heard the shots, said Randy Davis, president of the Marysville Education Association.

“She ran into the cafeteria and saw students down,” said Davis. Silberberger also saw a gunman.

Davis would not reveal details of the confrontation, but one student who witnessed it told CNN affiliate KIRO what he saw.

“She just grabbed his arm,” Erick Cervantes said. “She’s the one that intercepted him with the gun. He tried either reloading or tried aiming at her.”

Silberberger declined CNN’s request to be interviewed but issued this statement: “I am thankful and grateful for the support from everyone. At this time I am requesting privacy.”

A law enforcement source with knowledge of the investigation told CNN that Jaylen was indeed having trouble reloading and that it was because his hands were trembling.

Police have not yet said how many shots were fired, but Jaylen had at least one bullet left before the confrontation with Silberberger, because the final shot was the one that ended Jaylen’s life. A Beretta .40-caliber handgun believed to have been used in the shooting has been traced to Jaylen’s father, according to the source.

By all accounts, Jaylen was a popular student. Just a week ago, he had been named the high school’s freshman homecoming prince.

“It’s weird to think about, because you see him and he is such a happy person,” sophomore Alex Pietsch said. “You never really see him be so angry and so upset. … People were telling me who it was when I was getting in my mom’s car and I was like, ‘What? This is not happening. … This is crazy.’ It was just surprising to me that him, out of all people, would be the one.”