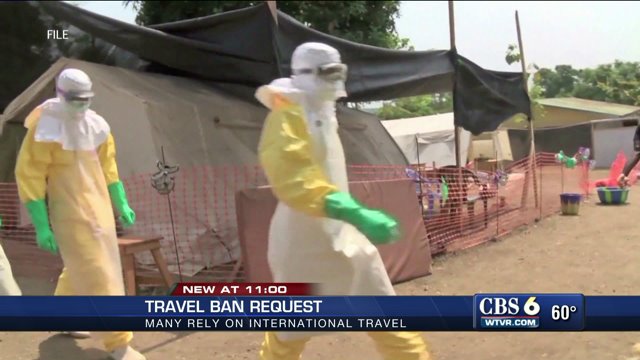 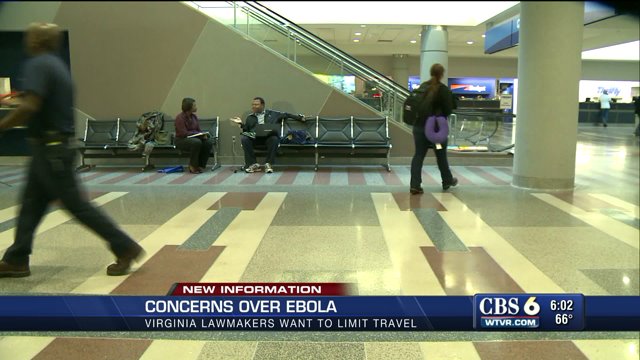 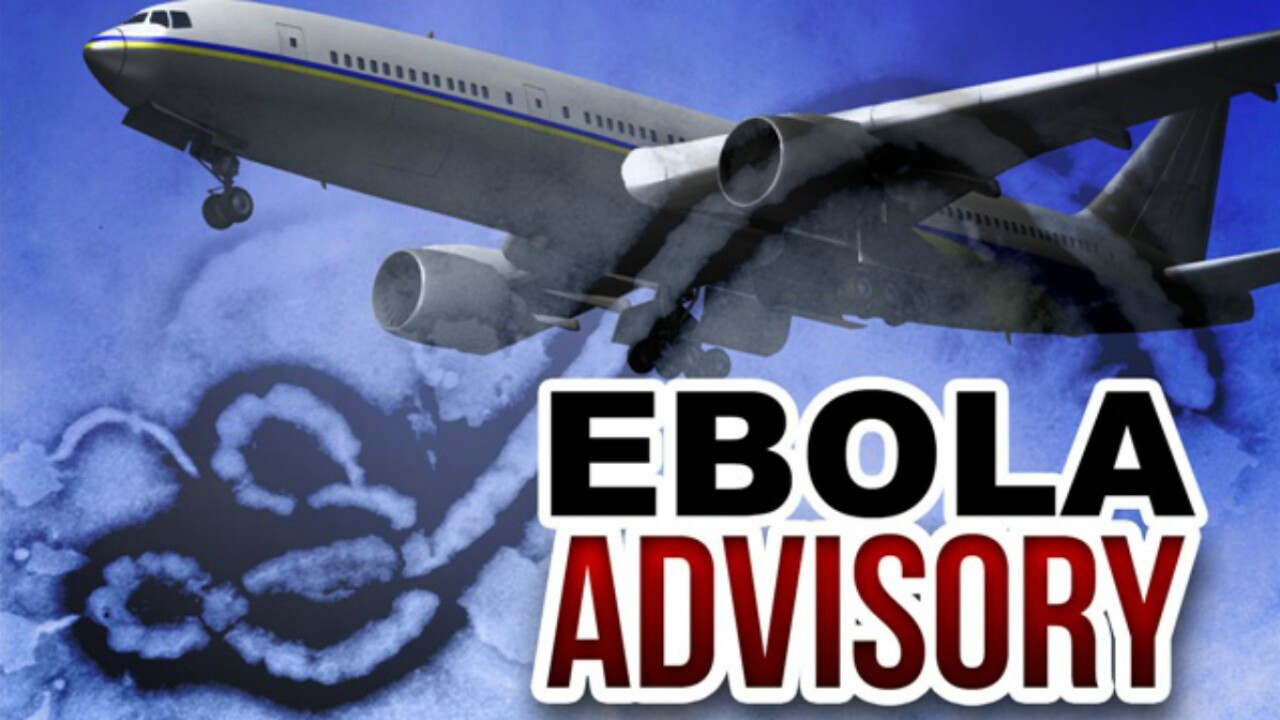 RICHMOND, Va. -- Several state lawmakers sent a letter for Virginia Governor Terry McAuliffe that urged him to ban travel to Virginia from areas affected by the Ebola outbreak.

"It is increasingly clear to the American people that the Obama Administration has failed to properly respond to the Ebola crisis. This failure includes the refusal to ban flights into the United States from West Africa and impose an embargo on the issuance of visas for travel from persons in these countries," the letter from Delegate Bob Marshall (R), Senator Richard Black (R) and Delagate Mark Berg (R) said. "We strongly urge you to use the police powers of Virginia to protect our citizens and residents from exposure to Ebola even if it means a timely court challenge against passenger airlines or the federal government if they continue to permit entry into Virginia of passengers flying from Ebola affected areas. We also ask you to take similar measures to protect our seaports. Indeed, Government travel restrictions were used to limit Severe Acute Respiratory Syndrome (SARS)."

Organizations react to the news, and state their case

Do you think Virginia should ban travel from areas affected by the Ebola outbreak? Click here to share your opinion with the WTVR CBS 6 Newsroom.

Anne Goddard, President and CEO of ChildFund International said she understands why Americans would be concerned with flights. However, she said she has concerns if flights were banned.

Goddard's organization has been working in all three countries affected by Ebola to help work on reversing the epidemic.

"We have been receiving a lot of medical supplies that we are flying into the country," said Goddard. "If our staff and the goods we are bringing in cannot flow freely we and all the other organizations who are trying to help end the crisis to reverse the spread of the disease, our work will be hampered."

Earlier Wednesday, the Centers for Disease Control and Prevention the second Dallas health care worker who contracted the Ebola virus was on a flight the day before her symptoms.

Now, the CDC wants to interview all 132 passengers who were on the plane with her.

"Because of the proximity in time between the evening flight and first report of illness the following morning, CDC is reaching out to passengers who flew on Frontier Airlines flight 1143 Cleveland to Dallas/Fort Worth Oct. 13," the CDC said in a statement. The flight landed Monday at 8:16 p.m. CT.

Before flying from Cleveland to Dallas, nurse Amber Vinson called the Centers for Disease Control and Prevention to report a temperature of 99.5 Fahrenheit and informed the agency that she was getting on a plane, a federal official said. Vinson was not told she could not get on the plane, the official said. Authorities announced Wednesday that the nurse was diagnosed with Ebola.

The Ebola virus is not contagious before symptoms set in.

The woman "exhibited no symptoms or sign of illness while on flight 1143, according to the crew," Frontier Airlines said in a statement.

Earlier, she flew from Dallas-Fort Worth to Cleveland on Frontier Flight 1142 on October 10.

The airline said customers who may have traveled on either flight should contact the CDC at 1-800-CDC-INFO (1-800-232-4636). But the CDC statement referred only to passengers on the October 13 flight.

The October 13 flight was cleaned thoroughly after it landed, "per our normal procedures which is consistent with CDC guidelines," the airline said. After the airline was informed of the Ebola patient, the plane was removed from service.

Health workers who had any interaction with Dallas Ebola patient Thomas Eric Duncan, as Vinson did, are supposed to receive daily checkups for Ebola symptoms, CNN's Elizabeth Cohen reported. It remained unclear how and why this worker traveled out of state.

In a sign of growing concerns about Ebola, President Obama canceled trips to New Jersey and Connecticut on Wednesday to convene a meeting at the White House of Cabinet agencies coordinating the government's response to the outbreak.

Vinson, who lives alone, is in isolation at Texas Health Presbyterian Hospital.

The news that she contracted Ebola cast further doubt on the hospital's ability to handle the virus and protect employees.

It's the same hospital that initially sent Duncan home, even though he had a fever and had traveled from West Africa. By the time he returned to the hospital, his symptoms had worsened. He died while being treated by medical staff, including the two women who have now contracted the disease.

Medical staff "may have done some things differently with the benefit of what we know today," he said, adding, "no one wants to get this right more than our hospital."

The health care worker had no pets, authorities said.

More than 120 being monitored

Seventy-five health care workers in Dallas are being monitored for any Ebola symptoms, Varga said.

Separately, Dallas County Judge Clay Jenkins, who is overseeing the response efforts, said 48 other people in the community still are being monitored after having contact with Duncan, who was Dallas' first Ebola patient. Those 48 are asymptomatic, and Sunday will mark the end of the window in which they could get sick.

The second worker reported a fever Tuesday and was immediately isolated, health department spokeswoman Carrie Williams said. The virus is not contagious before there are symptoms.

A preliminary Ebola test was done late Tuesday at the state public health laboratory in Austin, and the results came back around midnight. A second test will be conducted by the Centers for Disease Control and Prevention in Atlanta.

"Health officials have interviewed the latest patient to quickly identify any contacts or potential exposures, and those people will be monitored," the health department said.

Official: Duncan should have been moved

An official close to the situation says that in hindsight, Duncan should have been transferred immediately to either Emory University Hospital in Atlanta or Nebraska Medical Center in Omaha.

Those hospitals are among only four in the country that have biocontainment units and have been preparing for years to treat a highly infectious disease like Ebola.

"If we knew then what we know now about this hospital's ability to safely care for these patients, then we would have transferred him to Emory or Nebraska," the official told CNN senior medical correspondent Elizabeth Cohen.

The latest infection marks the second-ever transmission of Ebola in the United States. Both stemmed from Texas Health Presbyterian Hospital.

On Tuesday, Pham said she was doing well.

"I am blessed by the support of family and friends, and am blessed to be cared for by the best team of doctors and nurses in the world," she said.

Also Tuesday, National Nurses United made troubling allegations about the hospital, claiming "guidelines were constantly changing" and "there were no protocols" about how to deal with the deadly virus."

"The protocols that should have been in place in Dallas were not in place, and that those protocols are not in place anywhere in the United States as far as we can tell," NNU Executive Director RoseAnn DeMoro said. "We're deeply alarmed."

Nurses were told to wrap their necks with medical tape when equipment left their necks exposed; they felt unsupported and unprepared, and they received no hands-on training, union co-president Deborah Burger said.

A Texas Health Presbyterian spokesman did not respond to the specific allegations but said patient and employee safety is the hospital's top priority.

The CDC is establishing an Ebola response team so that whenever there's a confirmed case anywhere in the country, "we will put a team on the ground within hours," said Dr. Tom Frieden, director of the centers.

Such a team, Frieden said, might have prevented Pham from contracting the disease.

While the Texas hospital deals with its third Ebola patient, the situation in West Africa is getting increasingly dire.

More than 4,000 people have died from Ebola this year in Sierra Leone, Liberia and Guinea.

And there could be 10,000 new Ebola cases per week in the three countries by the end of this year as the outbreak spreads, the World Health Organization warned Tuesday.

U.S. President Barack Obama says he'll reach out directly to heads of state to encourage other countries to do more to fight back.

"There are a number of countries that have capacity that have not yet stepped up," he said. "Those that have stepped up, all of us, are going to have to do more."