RICHMOND, Va. — Inspired by the popular ALS Ice Bucket Challenge in the U.S. this summer, Gandhi Isaac created his own social media campaign to raise awareness about providing water to refugees in northern Iraq.

Instead of dumping water over his head, the college student from the Northern Iraqi city of Qaraqosh put a twist on the campaign. He delivered thousands of bottles of water to refugees fleeing the terror group of the Islamic State of Iraq and Syria (ISIS). In addition to his project, Isaac created hashtags like #MyIceBucketChallenge and #WeAreOne to encourage his friends to join him in his efforts to help the Iraqi people.

Please view a slideshow of photos from Gandhi Isaac about his #MyIceBucketChallenge campaign in Iraq: 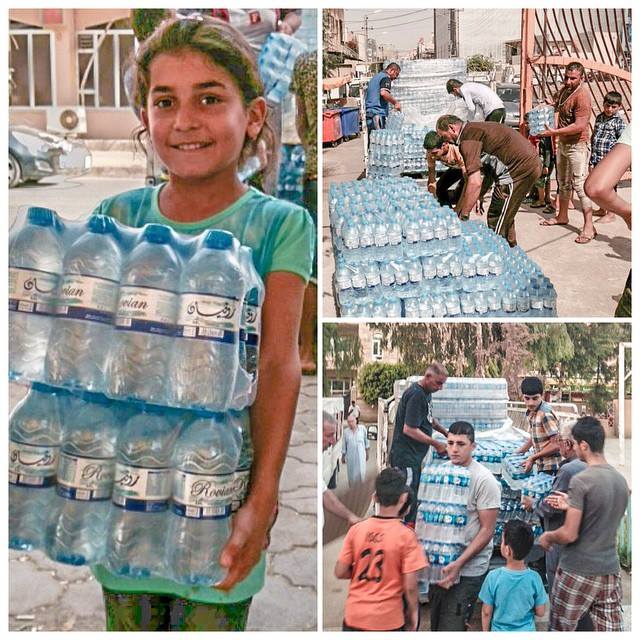 Isaac, who learned social media campaigning as a VCU exchange student in Richmond last year, said that his goal is to go beyond his Instagram and Facebook audiences and bring Iraqi people from the region together to help each other.

“I want my country, my people as one,” said Isaac, who came to VCU as part of the U.S. State Department’s Iraqi Young Leaders Exchange Program, which is offered every summer. As part of the VCU Social Media Institute he learned how to use social media to spark social awareness and change. For his own campaign, Isaac partnered with a German friend and so far they have given 7,200 bottles of water, collected through donations,  to refugees.

“I use social media for my challenge and to drive people’s attention,” said Isaac about his Instagram and Facebook photos showing the water bottles being delivered to children, women and refugees in Ankawa near Erbil, the capital of the Kurdistan Region of Iraq.

With the threat of ISIS, many of the IYLEP alumni who studied social media at VCU are using their campaigning skills to create grassroot efforts in the region and mobilize people to take action.

Salim Elias, a Yezidi from the Kurdish city Sinjar and also an IYLEP alum from VCU, helped to organize the Yezidi Rescue Project, with the financial support from a non-profit organization. The Yezidis are a religious community in the Kurdish region that was recently targeted by ISIS for its beliefs. The Yezidis were forced to flee their homes when ISIS was approaching.

“We left our home for the last one and a half months because ISIS were only two kilometers from our hometown,” Elias said, who now lives 130 miles away from Sinjar, in a cluster of abandoned houses that have become the Yezidis’ new homes.

With the help of a children, two volunteers of the Yezidi Rescue Project bring water to a refugee community in Dahuk in Iraq.

“Through social media, I’m raising donations and tell facts about what people have been through in the mountains,” said Elias.

“We are helping about 600 families, 3,000 persons roughly, with bread-making stoves, water, potatoes, onions, carrots, flour, drinking water, etc,” added Elias, who depends on the help of local volunteers to distribute food. He hopes to continue helping his Yezidi community until the promise of international relief reaches the Sinjar village.

Samma Jamma, a 2012 IYLEP alumni from VCU, is also working with a humanitarian campaign. She uses social media to spread reliable information as well as to broadcast important information like “to inform the [Internally Displaced Persons] to go to the authorities of each quarter and register their names to get assistance.”

As a way to also reach out to locals in the Kurdistan Region and to rally support for the female fighters in the Kurdish military forces Peshmarga, Soma Majid, a former IYLEP student from Kurdistan, created a private Facebook group.

The group now has 287 members, including international supporters. Majid and other members of the Facebook group post photos of female soldiers fighting alongside men on the front lines, video clips of news updates and messages of support.

“I decided to open a social media campaign on Facebook and Twitter to raise awareness and give support to our Kurdish female fighters,” said Majid, whose campaign includes the hashtags #WeAreAllPeshmarga and #WeStandWithOurPeshmargaGirls to promote community engagement and appreciation for the female soldiers, who are specifically targeted by ISIS fighters.

Soma Majid holds the Kurdish flag in front of a VCU residential housing building this summer as part of her show of support for the women fighting in the military.

“I’ve tried my best to eliminate those fears among people, especially women, through social media campaigns,” said Majid, who started her own campaign in response to ISIS’ social media use and intimidation tactics.

And the Iraqi students have received support from their friends at VCU as well. Amanda Velez, program director for IYLEP at the VCU Global Education Office, wanted to counteract ISIS’ social media tactics of spreading “propaganda about hate and violence” and to encourage the students as they returned home to a volatile state. She started her own social media campaign.

“I really wanted to do something that would help to flood the students’ social media accounts with something positive and supportive,” said Velez, who contacted all VCU students and staff who had worked with the program in the last five years. “I asked everyone to take a photo of themselves showing support for Iraq, whatever that meant to them. So for me it was holding up the Iraqi and Kurdish flag and just taking a picture in front of the statue of liberty that’s up in Church Hill to show support,” said Velez.

Please view a slideshow with photos from Amanda Velez and other members of the VCU community in support of the Iraqi students: