What neighbors found in foreclosed Ariz. home is stinking up neighborhood

MESA, Ariz. — Neighbors in one community in Arizona are at their wit’s end trying to figure out how to deal with a rapidly deteriorating situation at a foreclosed home on their street.

“When the wind is right, you can just smell it all through the whole neighborhood,” said Joan Waldrop.

KTVK reports that the smell is coming from a home located near Main Street and Power Road. One peek inside and you can see why.

“There’s feces and urine all over the whole house,” Waldrop said. “The walls, the furniture, it is absolutely covered.”

Neighbors say the home was left that way by its former owners, but it wasn’t just a stinky mess that was left behind.

“The person that lived there has been evicted and the house is now empty, and the empty house has at least four cats in it.” she said.

For the last month, Waldrop and her neighbor, Ro Boey, tell KTVK they’ve been trying to get someone to come and get the cats. 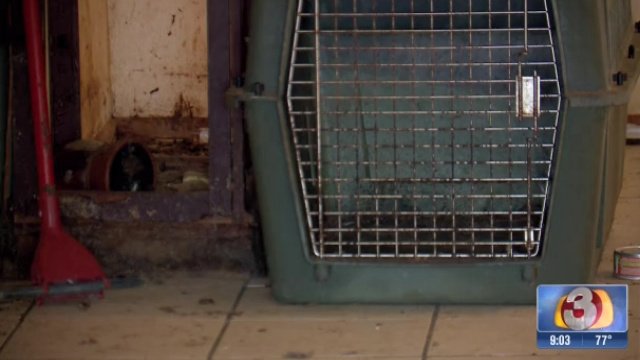 They say they’ve called every animal agency they can think of and even the Maricopa County Sheriff’s Office.

“They just keep going around,” Boey said. “Call this one, then this one says call that one, and this one says it’s not our problem, have you called this one? And it’s a vicious circle.”

In the meantime, they’ve been caring for the animals which will not leave the property even though the windows are open.

Ultimately, the responsibility to deal with the cats falls on the property owner which, at this point, is Coldwell Bank.

A realtor for the house said Thursday evening he, too, has reached out for help to try and find a solution, including calling the sheriff’s office.

A spokesman for MCSO said that they did receive those calls but that because the animals are being cared for and do not appear to be in immediate danger, it is not considered an urgent matter.

Even so, he said the sheriff’s office does plan to get out to the house at some point. Neighbors say it can’t happen soon enough.