RICHMOND, Va. -- Nicole Pries and Lindsey Oliver became the first same-sex couple to get married in Richmond. The women tied the knot at the John Marshall Courthouse Monday afternoon moments after the 4th Circuit issued its mandate and marriage licenses were issued to same-sex couples in Virginia. 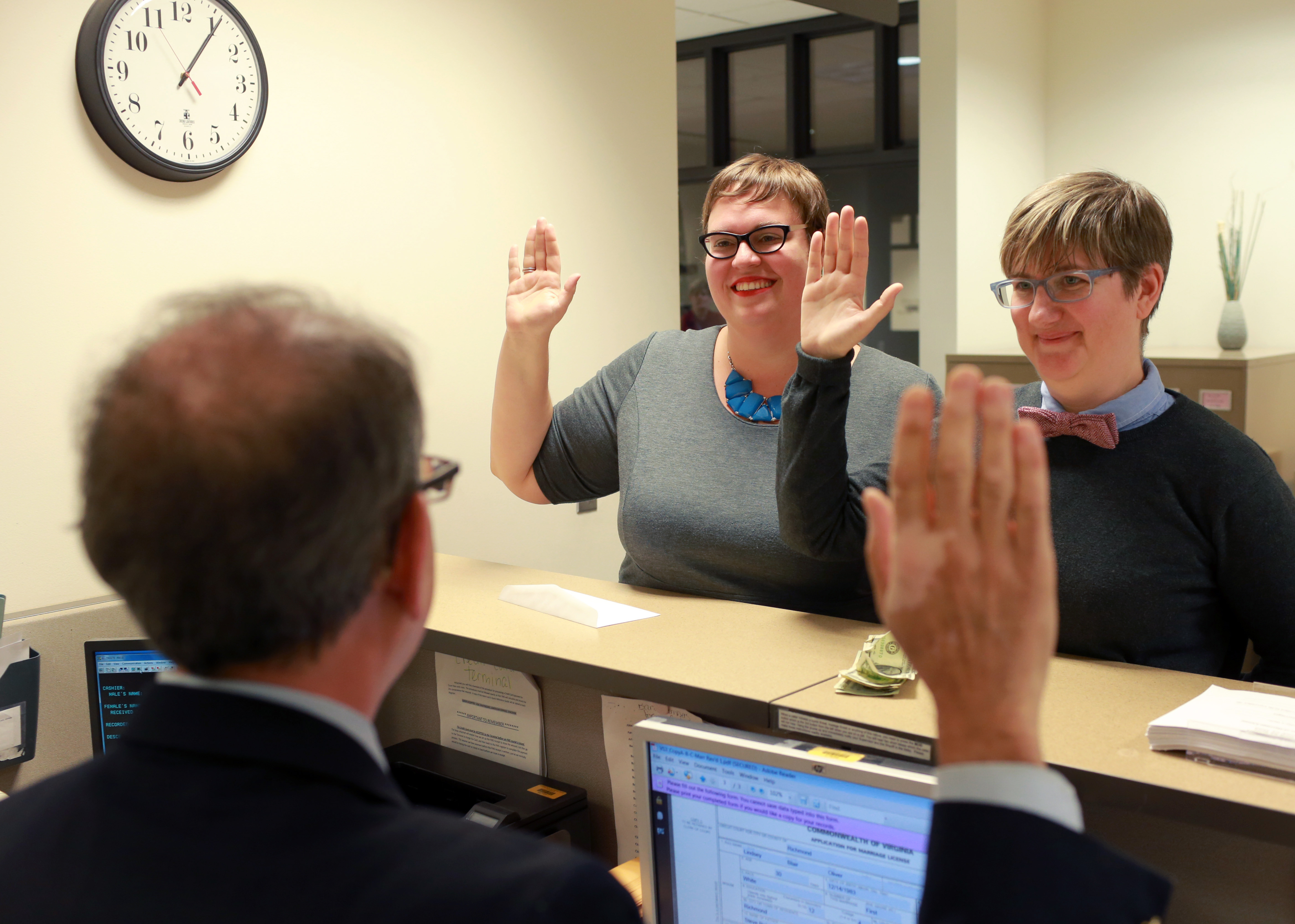 Today's historic decision by the U.S. Supreme Court to  staying out of the same-sex marriage debate,  for now, fell on the third anniversary of Pries and Oliver's promise to stay committed to each other forever.

"Three years ago, we had our commitment ceremony. Today. This is our anniversary. We're just so happy to affirm our love but also to have the state of Virginia affirm it as well," Pries said.

The couple left work to get their license and did not expect to be the first same-sex couple to get married in Richmond.

It wasn't the rush of people that some expected, but several other gay and lesbian couples also got their marriage licenses Monday -- just hours after the Supreme Court announced they were refusing to hear appeals from several states, including Virginia, where gay marriage bans have recently been struck down by lower courts.

Dr. Rev. Robin Gorsline, who performed the first same-sex marriage in Richmond, said the fact that the justices lifted the stay caught him off guard.

"I didn't expect this ruling to happen or this decision to happen, so it's an extraordinarily beautiful day," Gorsline said.

"This is a tremendous moment in Virginia history," Attorney General Mark Herring (D – Virginia) said in a statement after the Supreme Court's decision paved the way for same-sex marriages to take place. "All Virginians have the constitutional right to be treated fairly and equally, to have loving, committed relationships recognized and respected, and to enjoy the blessings of married life."

The Family Foundation, which has been outspoken in its defense of traditional marriage in Virginia, released a statement expressing its disappointment with the Supreme Court's inaction.

"Unfortunately, over one million Virginians who legally voted to adopt the marriage amendment [which defined marriage has between a man and a woman] have been disenfranchised, leaving them to wonder if their vote on any issue is safe from government reprisal," Family Foundation president Victoria Cobb said in a statement. "Those voters were also denied a defense by Virginia Attorney General Mark Herring, who put his political aspirations ahead of both the Constitution of Virginia and the oath of office."