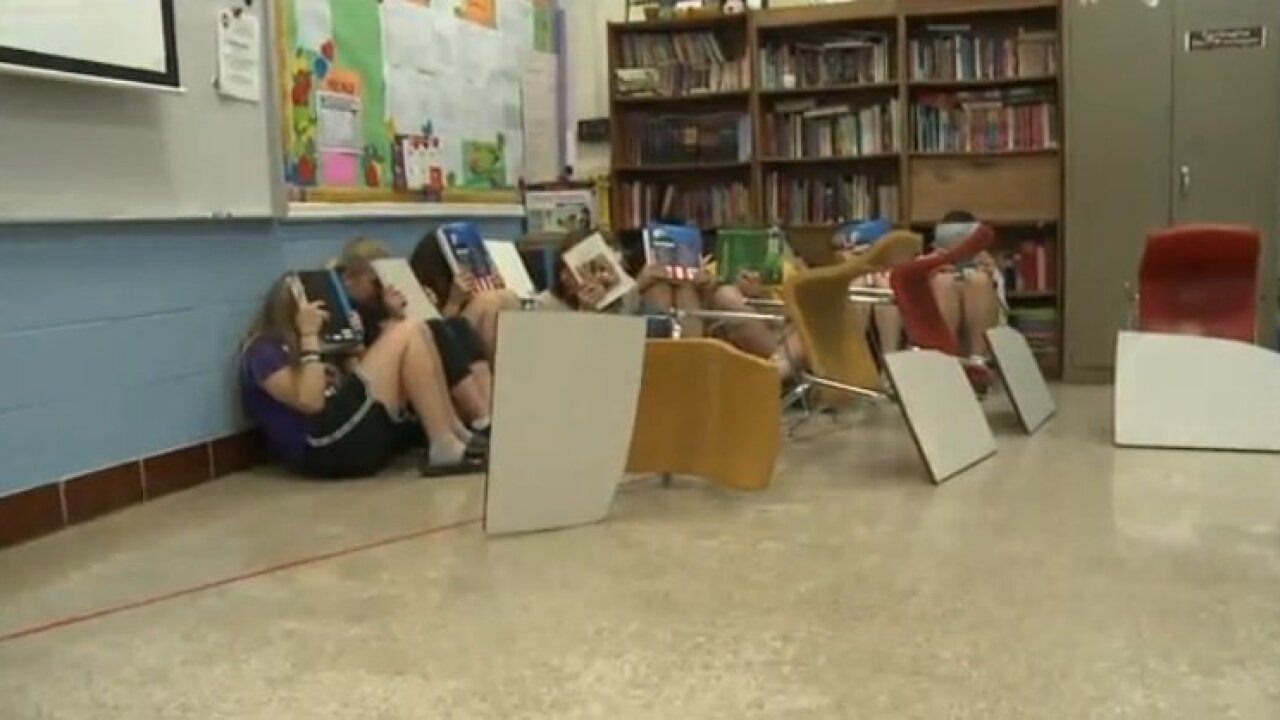 SHELBY COUNTY, Ind.  — An Indiana high school was chosen to be the first in the country to be installed with a revolutionary security system to thwart school shootings.

Southwestern High School was handpicked by the Indiana Sheriff’s Association to be armed with the new technology, which networks the school with local law enforcement.

“I think that Newtown, Sandy Hook, really made people understand, made us all understand this could happen to us,” said Dr. Paula Maurer, superintendent of Southwestern Consolidated Schools. “Now is the time to do something about it. We have some answers. We have the technology. We have ways to make our kids safer and we have to do it.”

The story of their new and advanced security system began with Montgomery County Deputy Sheriff Mike Kersey. Like many in law enforcement, Kersey was looking for better ways to protect the public, especially children.

“School should be a safe haven,” he said. “It should be a place where kids shouldn’t have to worry about not coming home.”

Kersey knew, however, there were problems with the way authorities were responding to school shootings across the nation, and it was proven again and again during active shooter drills. He explained that authorities simply did not have the tools to prevent or quickly stop an attack. They were doing the best they could with what they had.

“All the training we were doing wasn’t really mitigating the incident,” Kersey explained to FOX59.

According to Kersey, it takes an average two to four minutes after a shooting has begun, before someone calls 911. Usually, the caller is already under attack or has only heard gunshots and can only provide little information about the active scene. It also takes time for authorities to get to the incident site. All the while, they have very few details about what exactly is happening inside and where.

“In my building, the Sheriff`s department is aware of what’s going on within seconds,” touted Maurer.

Kersey told FOX59 that he came across a website for Net Talon, a Virginia-based company that created the virtual command technology he’d been yearning for. Kersey and Net Talon began working with the ISA and completed installation of the system at Southwestern this summer.

Here’s how it works.

Every teacher is required to wear a key fob which they would press if there was a life-threatening emergency. That activates the security system and immediately notifies law enforcement. Teachers are directed to get students into their classrooms and shut the door which automatically locks. Inside the classrooms, teachers have a tool that helps them report whether their class is safe, under attack, or dealing with an injury.

Miles away, Shelby County deputies have instantly received a complete layout of the school, which classrooms are safe, and what’s going on.

On top of that, they can also begin tracking the shooter through surveillance cameras and sensors throughout the building.

“‘We can locate him. We can get a description of him immediately. We can track him throughout the building. We know his weapons platform. We know what he’s doing and where he’s doing it instantly,” explained Kersey.

If the shooter reaches a classroom, a new hardened door stands in his way. This door cannot be breached in mere seconds.

As authorities are en route to the school, deputies back at the sheriff’s department can set off a non-life threatening counter attack. It’s a mechanism we cannot detail to ensure the integrity of the system.

“We can start controlling where (the suspect) goes within the building,” adds Kersey. “Which leads to our advantage… and now we are choosing the battle ground, not him.”

Another tool for teachers and students is a safety kit found inside every classroom which includes a tourniquet in case someone is suffering from a gunshot wound, but cannot be seen by paramedics immediately.

ISA is backing Southwestern High School as the Best Practice Solution for School Safety, hoping to set new standards for schools across the country.

Southwestern High’s project was mostly funded by Net Talon. The district is also using some grant money to offset the costs. Maurer and Kersey hope educators and parents will challenge legislators to find more federal dollars for upgrades.

“My hope is that there is never another child ever hurt by violence in a school again,” said Maurer. “It’s here. It’s now. We’ve gotta do it. Now is the time.”

There will be a ribbon cutting ceremony on Sept. 11 at 6 p.m. at the high school. Officials will begin by holding a memorial in memory of the victims of Columbine, Virginia Tech, and Sandy Hook.