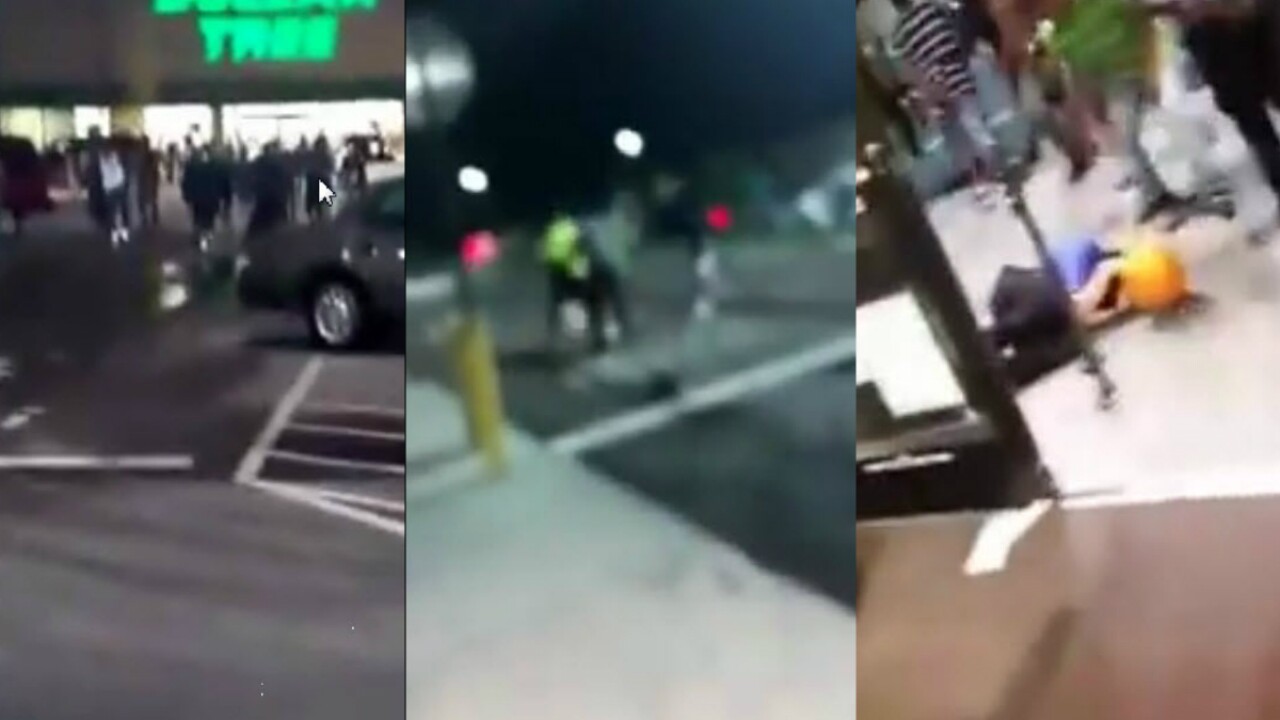 WARNING: This story contains material that some viewers may find disturbing due to its graphic nature. Viewer discretion is advised.

MEMPHIS, Tenn. — Police are searching for a group of teens responsible for a brutal mob attack in a Kroger parking lot in Tennessee Saturday night.

WREG reports three people were attacked by the large group of teens around 9:15 p.m. in the store parking lot at Highland and Poplar.

A woman captured the horrifying attack with her cell phone. That video has gone viral on Facebook and other social media sites.

The woman then asks “where is the security at” as one of the workers is kicked in the head by an assailant and then pelted with pumpkins from a store display.

“Wait a minute. Hold on!” she yells, as the gravity of the situation seems to be sinking in, as she sees another worker being thrown to the ground.

“Oh my God,” she says, as others scream and horns honk in the parking lot. “That man, get him y’all. Somebody call somebody… These stupid @%$ kids fool.”

Police said this all started when a 25-year-old man was attacked by the group walking to his car. At that point, two Kroger employees, a 17 and 18-year-old, ran to help him.

That’s when the mob turned on them and they were repeatedly hit in the head and face. The teens told police that pumpkins “in excess of 20 pounds” were thrown at their heads while they were lying on the ground.

As a result, police said both teens lost consciousness before a security guard eventually managed to stop the attack.

A Kroger official said the employees were transported to an area hospital and then released to their parents.

“It is extremely troubling to see how many young people were involved, especially on the heels of last week’s youth forum,” Memphis Police Director Toney Director Armstrong wrote in a statement. “Last night’s events clearly demonstrates a lack of parental controls and if warranted these parents will also be held accountable.”

A witness, who spoke to WREG on the condition of anonymity, said he is a friend of the victims.

The witness said the group was made up of “100 to 125 kids” who were playing a game called “Point Them Out, Knock Them Out.”

“Where they would point someone out and attempt to knock them out or fight them. There was no real reason behind it,” the witness said. “They followed hitting him with a pumpkin. He was already unconscious, so all you could see was blood and pumpkins.”

The teen, who watched in horror as the mob beat his friends until they couldn’t move, said this is the second weekend he saw a violent mob of kids attack random people in the shopping plaza parking lot.

“Why, honestly why? Why did that happen?” the witness asked. “There was no real reason behind it. What was the point of that game? You are hurting somebody you don`t even know.”

The witness says the video of the incident, which appears to show several black teenagers beating one white teen, only shows a part of what happened that night. He said that blacks, whites, girls and boys were all part of the vicious pack.

“Will is white, Brian is black and then my other friend, Brandon, he’s black as well,” replied the witness.

WREG slowed down the video and spotted a security guard dragging a black teen away from the crowd.

The witness identified that teen as another Kroger employee who was knocked unconscious after he tried to stop the mob.

“It’s kind of traumatizing because it didn’t seem real. It didn’t seem like any of that would happen,” the witness said.