“If you look on a 20-year basis, federal and state direct-aid for education has gone down,” Sen. Warner said. “Cost of education has gone up. Higher education cost have actually surpassed health care costs in most cases. We’ve tried to cover that gap by making it easier to loan.”

According to the Dynamic Student Loan Repayment Act that Warner is attempting to pass in the U.S. Senate’s upcoming session, nearly 15 percent of student loan borrowers will default within three years of beginning repayment.

Included in the legislation is income-based repayment provisions and refinancing options, which would make it easier for borrowers to manage their student loan debt while seeking employment or furthering their education.

Warner said that immediate plans could include capping tuition repayments at 10 percent of income, paying a pre-tax deducted from employment checks capped at $5,000 and options to refinance loans.

“Some of our federally guaranteed loans are actually at pretty decent rates, but some only apply to undergraduates,” Warner said. “If you apply for graduate loans, you might be paying 7, 8 or 9 percent interest rates. If you can get a mortgage for 3 or 4 percent, why shouldn’t you be able to refinance your student debt to mortgage rate loans?”

Corinne Vigen, a 2013 VCU graduate and former VCU Young Democrat, introduced Warner to the college audience on Wednesday and described her own current dilemma. She has to decide whether she can seek another degree while paying down her existing student loans.

“Will I ever be able to save enough money to buy a house, or will I be stuck renting forever,” Vigen said. “Am I going to be able to recover this financial standing that I have right now, with this looming possibility of a graduate or doctorate degree?”

On average, student debt for graduates in 2013 reached $29,000 a year. For students seeking graduate and doctorate degrees that amount typically doubles or triples. In addition, many college graduates are finding it difficult to find jobs or careers with enough compensation to cover loan payments on top of other living expenses. 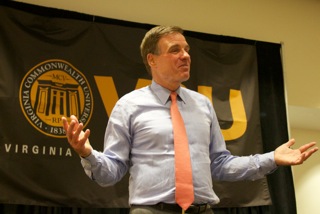 Warner suggested the creation of a website, similar to the real estate database Zillow, which would provide students a comprehensive assessment of what colleges throughout the country cost and what they have to offer academically and financially.

“We need to make better informed consumers,” Warner said. “An easy-to-use website, that would have every vocational school, community college, four-year university with your chances of graduating, getting a job and how much debt you’d have, that’d be an enormous improvement.”

By Eric Arthur and Christopher Suarez (Special to WTVR.com)