The voices in the video tell the story.

"Something crazy is going on outside," a woman shouts. "I'm scared."

Moments later, the same voice yells that a tree has fallen and another says, "It's on that guy's camper."

The footage posted on the website of CNN affiliate WAVY came from the Cherrystone Family Camping Resort on the Chesapeake Bay in Virginia, where a tornado on Thursday toppled campers and sent trees crashing onto vehicles.

State Police spokeswoman Corinne Geller said a New Jersey couple died when a tree fell on their tent and 36 people were hospitalized -- including the couple's 13-year-old son. He was in critical condition.

She identified the fatalities as Lord Balatbat and Lolabeth Ortega, both 38, of Jersey City.

According to Geller, more than 1,300 people were staying at the campground and police have accounted for all of them, plus 40 Cherrystone staff members.

Photos from the scene in Northampton County showed overturned campers, with a downed tree crushing one vehicle.

The area was under a tornado warning, and Danielle Rivera -- who shot the video footage -- told WAVY of giant hail and crushing winds that tore off the awning of her family's camper. 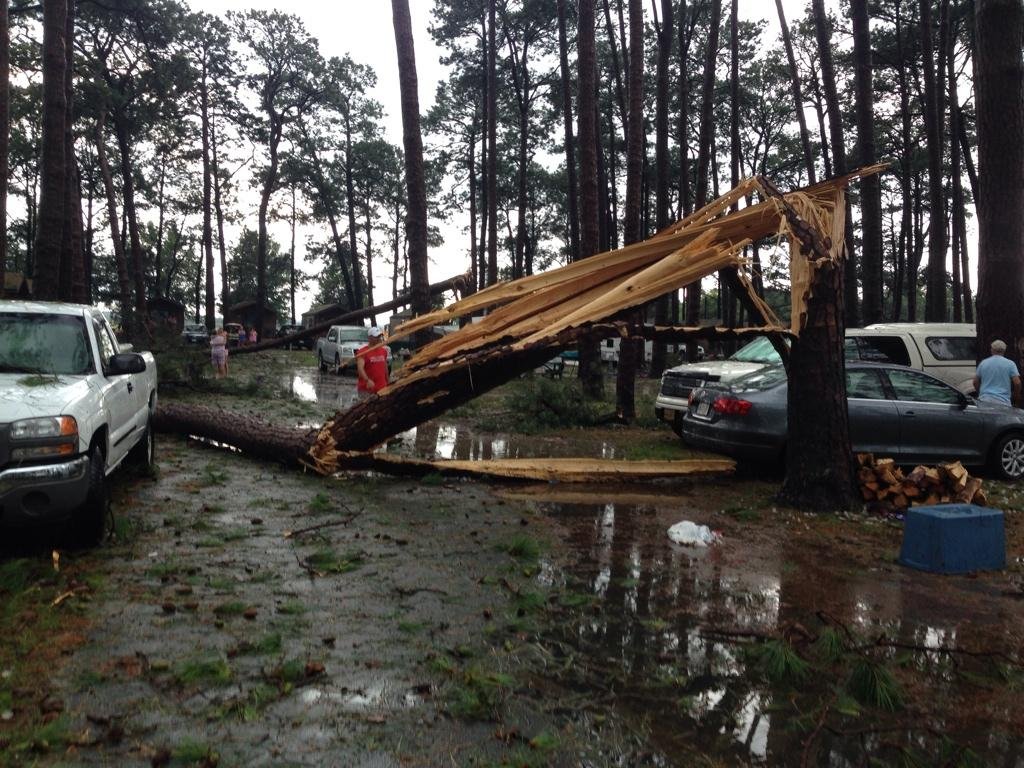 She and her mother decided to stay in the camper until the hail and wind relented enough for them to make a dash to their car.

"I thought a tree was going to fall on us," she said.

Survivors were bused to a local high school set up as a temporary shelter, and workers made sure the devastated campground was safe before allowing anyone to return, Geller said.

The injured were taken to four different medical centers, with most going to Riverside Shore Memorial Hospital, she said.

According to the National Weather Service, a cluster of "supercells" ahead of a cold front formed a storm over Chesapeake Bay just after 8 a.m. ET.

The storm intensified as it moved on ashore about 30 minutes later. The area was under a tornado warning issued at 8:20 a.m., and Geller said the weather service confirmed that an F1 tornado hit the campground.

Cherrystone opened in 1964 occupies 300 acres with 725 sites including cabins, cottages, and deluxe campers, its website says. Geller told reporters that the tornado appeared to come off the water and hit the campground. It also knocked over a tractor-trailer on a nearby road, injuring the driver, she said.

All the other damage and injuries occurred at the campground, Geller said, adding that most of those sent to hospitals had been treated and released.

Rivera told WAVYthat she and her family had been going there for 10 years, but "never have I ever witnessed anything this bad."

The campground that opened in 1964 occupies 300 acres with 725 sites including cabins, cottages, and deluxe campers, its website says.