ARLINGTON, Tex. — After rescuing the same pit bull for a second time, Arlington Police Sgt. Gary Carter has decided to adopt the dog.

“This dog keeps crossing my path so it must be meant to be,” said Sgt. Carter.

The officer first rescued “Jeffrey” a few weeks ago when he found what some people warned was a ‘vicious’ pit bull; Carter found the dog to be friendly and photos of the two soon went viral.

But after reuniting Jeffrey with this owner, the dog got out again and was taken to Animal Services. This time the dog’s owner said he did not want him back.

That’s where Sgt. Carter stepped in and rescued the pup.

KDAF reports that Carter decided to adopt the dog so he would not be euthanized.

Accordingly, he changed Jeffrey’s name to Chance, in recognition of his second chance in life.

“I guess I’m just an old big softie, but I keep running into him. Maybe it was one of those meant to be things… so I just thought it would be a good idea for me to bring him home.” 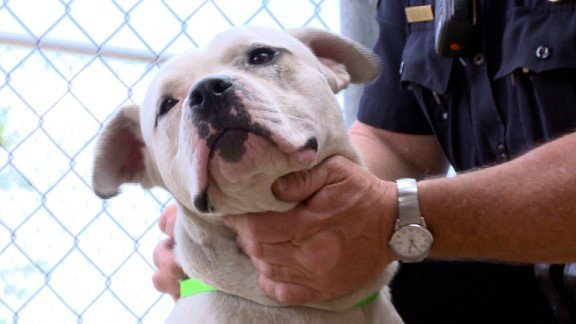