VIRGINIA BEACH, Va. (WTVR) - One person has been killed after a tractor-trailer drove off the Chesapeake Bay Bridge-Tunnel Thursday morning.

Police said the accident happened near mile marker 15 when the truck struck a light pole, slammed through the guardrail and landed in the Chesapeake Bay just after 10 a.m.

Four Navy divers said that the driver was “too entangled” in the wreckage to be saved, according to the Virginia Beach Fire Department's Amy Valdez.

“It’s a multi-jurisdictional response to make sure all of the responders are safe. Concerned with what the truck may be carrying or if anything was spilled into the water, no hazards at this point. As far as what is in the trailer, they don’t know,” Valdez said.

WTKR reports that the semi was headed northbound as workers were repairing cracks on the bridge when the big rig slammed into a maintenance truck. That caused the tractor-trailer to jack-knife and sail off the bridge.

Additionally, Navy crews hooked cables to the truck's cab and trailer to keep the big rig from drifting away.

One northbound lane of traffic was closed on the bridge-tunnel near mile marker 15. The bridge-tunnel was open to all traffic as of 12 p.m., but drivers were advised to use caution and plan for delays.

A @USNavy source tells me a rescue swimmer on board a H-60 helicopter made multiple dives to the truck. @WTKR3

Source tells me swimmer could see the truck driver and he appeared to be in bad shape and already dead. @WTKR3

Source also says the swimmer could not breach cabin of the truck which was badly damaged. Multiple attempts were made. @WTKR3

One attempt the breach cabin of truck involved tying a rope to a boat and trying to pull the cabin door off, source tells me. @WTKR3

Depend on WTVR.com and CBS 6 News for updates on this story. 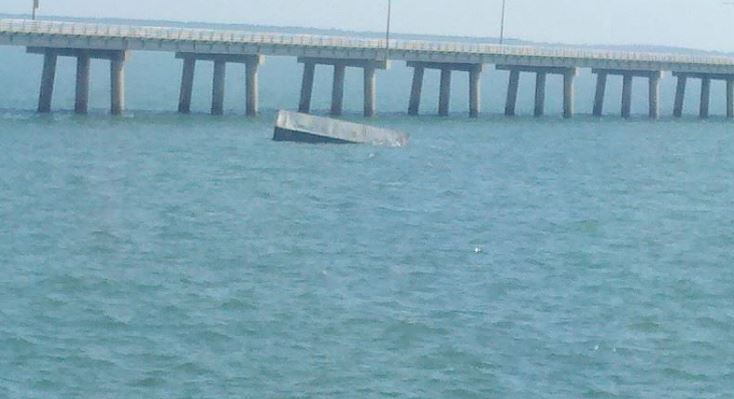