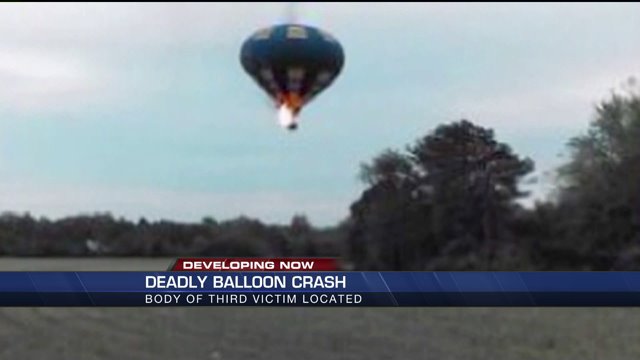 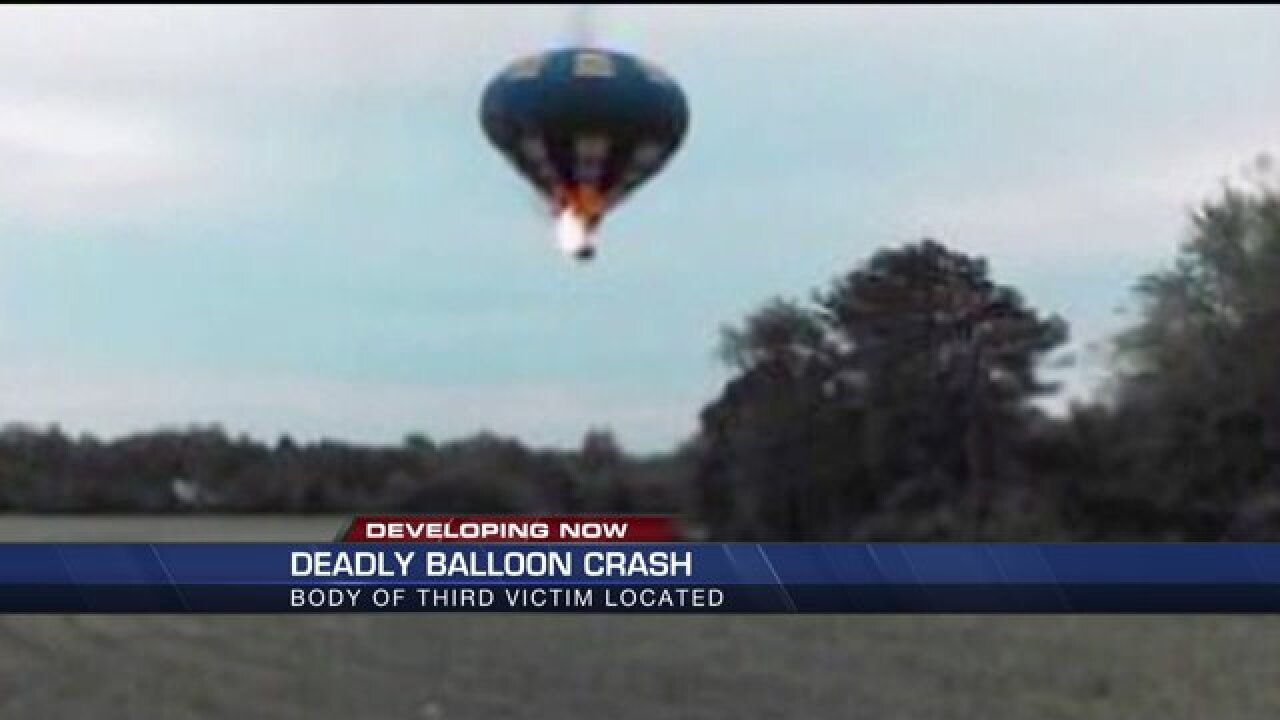 DOSWELL, Va. (WTVR) - A massive search has ended after state police recovered the body of the third victim in a fiery hot-air balloon accident at the Mid-Atlantic Balloon Festival at Meadow Event Park Friday night.

Virginia State Police said the remains of the third victim were discovered around 11 a.m. Sunday around 100 yards north of where the second body was found the day before.

As a result, the large-scale search effort was called off and state police and National Transportation Safety Board (NTSB) investigators are now concentrating on locating evidence and balloon wreckage.

The task of uncovering what actually causes the balloon to collide with an electrical wire is up to federal investigators.

"If we do find any safety issues with this, we will make a recommendation in order to prevent such a tragedy from happening in the future," NTSB investigator Hedi Moats said.

A preliminary report by the agency is due within 10 days.

On the ground, crews continue to look for any pieces of the balloon that could provide clues.

Neighbors like Elizabeth Mitchell, who saw the Caroline Pines subdivision transformed into a command center, are still coming to terms with the tragedy that happened so close to where they live.

"Oh, just tears streaming down my face. It's very sad," Mitchell said. "I just feel a somberness... It's amazing how life goes on, and we all move with it."

Associate head women’s basketball coach Ginny Doyle and director of basketball operations Natalie Lewis were on the balloon that crashed, the university said.

Official identification is pending from the Medical Examiner’s Office.

Earlier Saturday, the University of Richmond announced it had postponed this weekend's home baseball games vs. St. Bonaventure.

The parents of Natalie Lewis, the operations director for the women's basketball team, confirmed via a spokesperson Saturday evening that she was a passenger on the balloon.

"The search continues for our beloved daughter and we remain hopeful and ask for your continued prayers," Patricia and Evan Lewis, who are in Richmond, said in a statment.

The pilot was with the women in the balloon at the time of the incident, according to witnesses.

Mark Nelson, a friend of pilot, confirmed that Dan Kirk was an accomplished balloon pilot and ambassador to the sport.

"The Balloon community shares the loss of our good friend Dan Kirk "Capt Kirk" that was killed during contact with electrical wires...," Nelson of Virginia Balloons said in a statement. "Dan Kirk will be greatly missed by everyone in Ballooning across America. Our hearts go out to Dans family & the families of passengers involved in the Balloon accident."

The remains of two of the three people who were in the balloon when it caught fire were discovered Saturday. Virginia State Police said that a massive search continues for the third victim following a deadly hot-air balloon accident at the Mid-Atlantic Balloon Festival Friday night.

The remains of another victim who died in the hot-air balloon fire were also recovered early Saturday morning in a heavily wooded area near Doswell.

The victims' remains were taken to the Medical Examainer's Office in Richmond for positive identification.

Three people who were inside the basket of the hot air balloon when it hit a live power line while attempting to land about 8 p.m. Friday.

Friends and family of missing women waiting on recovery news from balloon search."Long/somber 12 hours." Keep them in your thoughts. @CBS6

Saturday morning state police said that due to the amount of time that has passed since the fire and the fact no one has been in contact with the other people in the balloon late Friday night, police reclassified their efforts from a rescue to a recovery mission.

When the balloon hit the power line, the gondola and balloon separated, according to witnesses who also heard two explosions.

Sandra Jones reported that police said the pilot made every effort to bring the balloon down before it struck power lines in an attempt to save lives.

State police said that over 100 state troopers and police, a Civil Air Patrol and with K-9 teams, conducted meticulous grid searches due to the heavily wooded terrain and underbrush to find the victims who were riding in the hot air balloon's gondola.

Balloon wreckage may never be found

Geller said the balloon had been sighted as far as the King George County line and even AP Hill.

“There is the possibility due to the intensity of the fire that there may be not much left of the parachute itself,” Geller said. “And the same goes of the basket. It’s like a wicker basket.”

As a result, state police said the search was the equivalent of looking for a needle in a haystack.

“So finding the wreckage… is proving to be a challenge in itself, because we’re not sure how much is left of it at this point,” Geller said.

Two people were seen either jumping or falling out of the basket shortly after the fire, witnesses said.

State police said that it may never be know whether the victims jumped or fell out of the balloon, which was part of this weekend's Mid-Atlantic Balloon Festival at Meadow Event Park.

Carrie Bradley was with her family when they saw the balloon and pulled over to snap a photo. Then they saw people jumping from what Bradley said was hundreds of feet up in the air. Bradley said that her daughter was traumatized afterward. [WATCH: Woman says balloon fire victims screamed 'Jesus, help us. We’re going to die' before jumping]

The event was cancelled in the wake of Friday's accident.

Virginia State Police, the NTSB and FAA are all investigating the accident since hot-air are a commercial aircraft.

Police asked anyone who saw the balloon — or may have information that could help them locate the crash site — to call 804-994-5754.