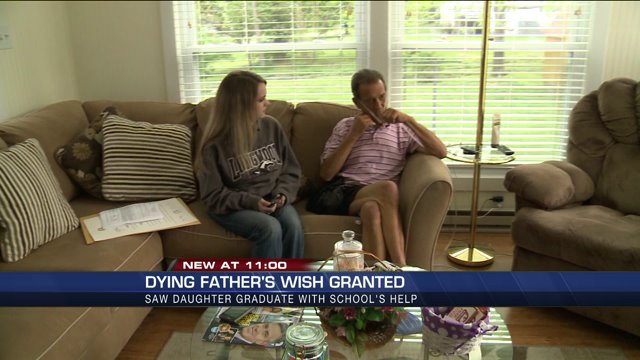 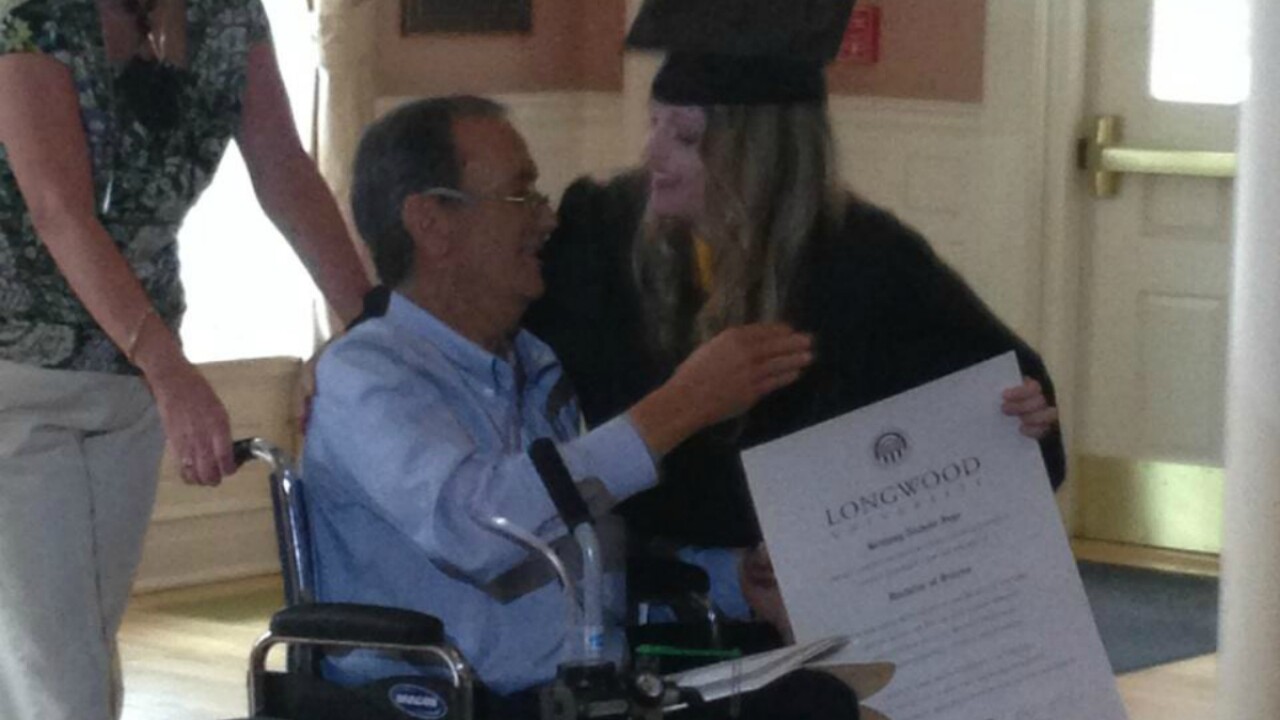 FARMVILLE, Va. (WTVR) – Bob Inge will readily admit he has made some mistakes in life. One of those mistakes, according to the 57-year-old father of two, was when he started smoking 40 years ago.

Last week doctors told him his cancer had progressed to stage four and gave him the option to either continue treatment at the hospital or go home to Crewe and spend his final days with friends and family. Inge chose the latter.

Inge's cancer diagnosis came at a tricky time for his family. His 23-year-old daughter Brittany was set to graduate Saturday from Longwood University in Farmville.

She said she would not attend the ceremony without her father.

"When I found out he was dying I decided I was not going to walk across the stage without him there," Brittany Inge said. "He made my dreams come true. He paid for college out of his own pocket."

Then, she says, a miracle.

Word of Bob Inge's health and Brittany's dilemma had reached Longwood University officials. They reached out to the Inge family, offering a special, private graduation ceremony so Bob could watch his daughter graduate.

"When they called me on Friday, I just started crying," Brittany said. "At first my dad wanted to wait until Saturday, but once he realized there was a possibility he would not be there, he was more willing to do it early."

On Monday morning Bob, Brittany and more than 20 other friends and family entered the Rotunda in the Ruffner Building to watch the special ceremony.

Longwood President W. Taylor Reveley IV presided. There was not a dry eye in the room.

"It was amazing," Brittany said. "I just want to thank Longwood because this is a once-in-a-lifetime opportunity."

Bob Inge said he feared he would die before watching his daughter graduate. He said the university -  of which he, too, is a graduate - lifted a huge burden off his mind and provided a huge blessing at the same time.

"I don't think we hear enough good things," Bob Inge said about why he wanted to share his family's story with the world.

When asked about a final message he wanted people who saw this story to read, he talked about family and love.

"The best thing about life is having kids. I have two beautiful kids. Both will be productive members of society. I am very proud of Brit who will go on to teach others," he said.

"It's not the stuff, the cars, the boats. I've had all of those things. It's the people you surround yourself with. It's your family."