RICHMOND, Va. (iPadJournos) – If you missed NASCAR last weekend or just can’t get enough of racing, head to the Richmond Coliseum this Saturday to catch the last race of the season for the Arena Racing series.

“It’s similar to NASCAR, so they can see the cars racing, but (it’s) close to home,” said Arena Racing fan Danielle Samoza.

Drivers will race around a hockey rink sized track in mini race cars, called half-scale stock cars. The cars reach speeds of close to 50 miles per hour while going around the track, and just like at NASCAR they bump, crash, and flip. Anyone with such a stock car can race and drivers range from 8-year-olds to adults, which race in different classes. 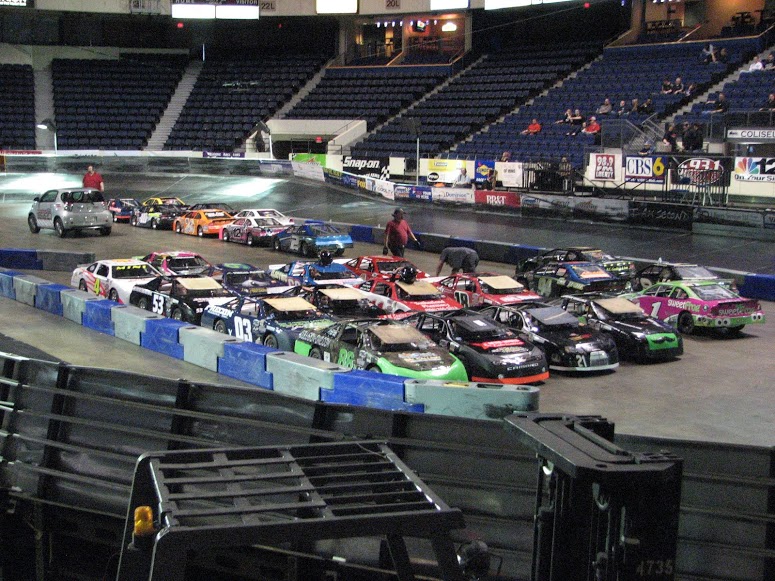 “All you have to do to race is buy a car,” said J.C. Poma, sponsorship and title sales manager at Arena Racing USA. “That said, most people do not buy a car and make that investment, if they do not have enough racing experience to compete. They would probably crash a lot and rack up a huge parts bill.”

Driver’s in the pro class compete for points and cash prizes and have a shot at a $10,000 championship prize at the end of the season. It may be on a small track, with small cars, but drivers take the sport very seriously as do the fans.

“It’s like watching a fighter jet in a fish bowl, it’s that fast. It’s eight second laps, a blink of the eye,” said veteran driver Lin O’Neal. “You have to learn how to breathe when you drive them. It’s a lot of fun and the fans love it, my kids love it. My kids get to come in the pits and hang out with me and work on the car, and they can’t do that at the NASCAR races we go to, so it’s really family oriented and it’s just a lot of fun.”

Click here to listen to Arena Racing fans talk about the season at the Richmond Coliseum.

The series started at the Richmond Coliseum in 1993, using a $28,000 wooden race track with just a few drivers. But it only lasted one season and wouldn’t reappear until 2002 when it took off in Hampton Roads.

From then on until three years ago, Arena Racing was in Hampton Roads, but founder and CEO Ricky Dennis wanted to eventually move back to the Richmond Coliseum.

“Coming back to Richmond has made a huge difference,” Dennis said. “I didn’t realize the amount of people I knew, and how many people I knew who wanted to get involved and help make this thing go. Because most people don’t realize that this is the only place in the world that this kind of thing is happening. It all started here, disappeared for a while, but came back here. And that’s how I wanted it to be all along.”

The sport is gaining popularity in Richmond as locals learn more about it and the promotion of Arena Racing increases.

“It’s a fun environment for the whole entire family, it’s action packed,” said Arena Racing fan Chad Haire. “You’ll get definitely your money’s worth for every ticket that you get, so it’s a great time for the whole family.”

“What makes it so viable is similar to what college basketball brings to the table, what minor league baseball brings to the table: it’s affordable, it’s family-friendly, something you can bring your kids to and know you’re in a safe environment while you’re there,” said Ben Terry, vice president of corporate partnership.

Dennis hopes that his Arena Racing series will gain enough popularity to eventually spread around the U.S. The season in the Richmond Coliseum runs from late fall to spring and ends with the season finale this Saturday, May 3 The car show starts at 3 p.m., the races at 7 p.m.

More information about Arena Racing is available on the series’ website.

By Ember Casler and Ben Billmyer, Special to WTVR.com

This story was reported by journalism students from VCU’s Richard T. Robertson School of Media and Culture.