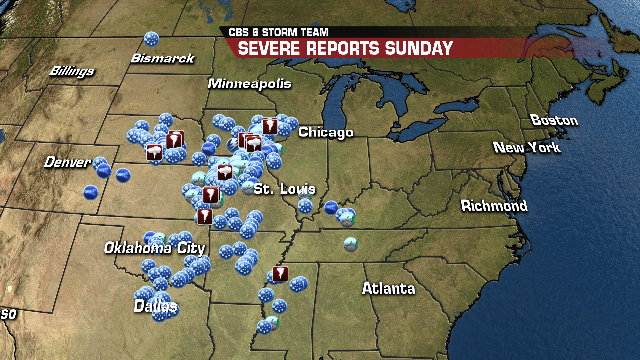 RICHMOND, Va. (WTVR) — A major storm system is moving slowly across the middle of the country.  There is a huge clash of warm and humid air to the south and cold air to the northwest.  This temperature difference is helping to provide violent weather in the storm’s warm sector.

The ingredients — temperature clash, warm & humid air, strong lift, a powerful area of low pressure, and a strong jet stream — are all combining to produce the needed combination for widespread severe weather and multiple strong tornadoes.  Tornadoes of EF-3 strength or higher will be possible. [Tornadoes slam several states as weather service warns to take cover]

In terms of effects on Virginia weather, rain chances will increase between Monday and Wednesday.  Wednesday looks to be the wettest day with over 1″ of rainfall during day.  Our state will be placed into the warm sector of the storm, allowing temperatures in the southern part of the state to reach around 80°.

Thunderstorms will develop during the day and could grow severe in the afternoon and evening.  Just like this past Friday, the best chance for severe weather will be roughly near and south of I-64, including the Richmond metro area.  The main threat will be damaging winds, but some large hail will be possible as well.  And just like this past Friday, isolated tornadoes could occur.  The risk level and area of concern may change as we get closer to Wednesday.

The storm will exit on Thursday, bringing our rain to an end.  Rainfall amounts from all of the computer models are above 1″ of rain.  Looking at about 20 runs of various models from the past few days, the average of all of the models for metro Richmond is close to 2.5″.  The heaviest total from one model suggests over 4″.  Thunderstorms do not allow for a widespread homogenous total, so locally heavier totals are likely.

When you look at rainfall for the entire state, the western third of Virginia may end up getting the most rain.  This map shows the most aggressive portrayal of possible rainfall totals statewide.  This is a computer model and not a specific forecast.  It does show the potential for totals on the higher end of the storm’s capability.

We will post frequent updates over the next few days.  Stay With CBS 6, We’ll Keep You Ahead of the Storm.