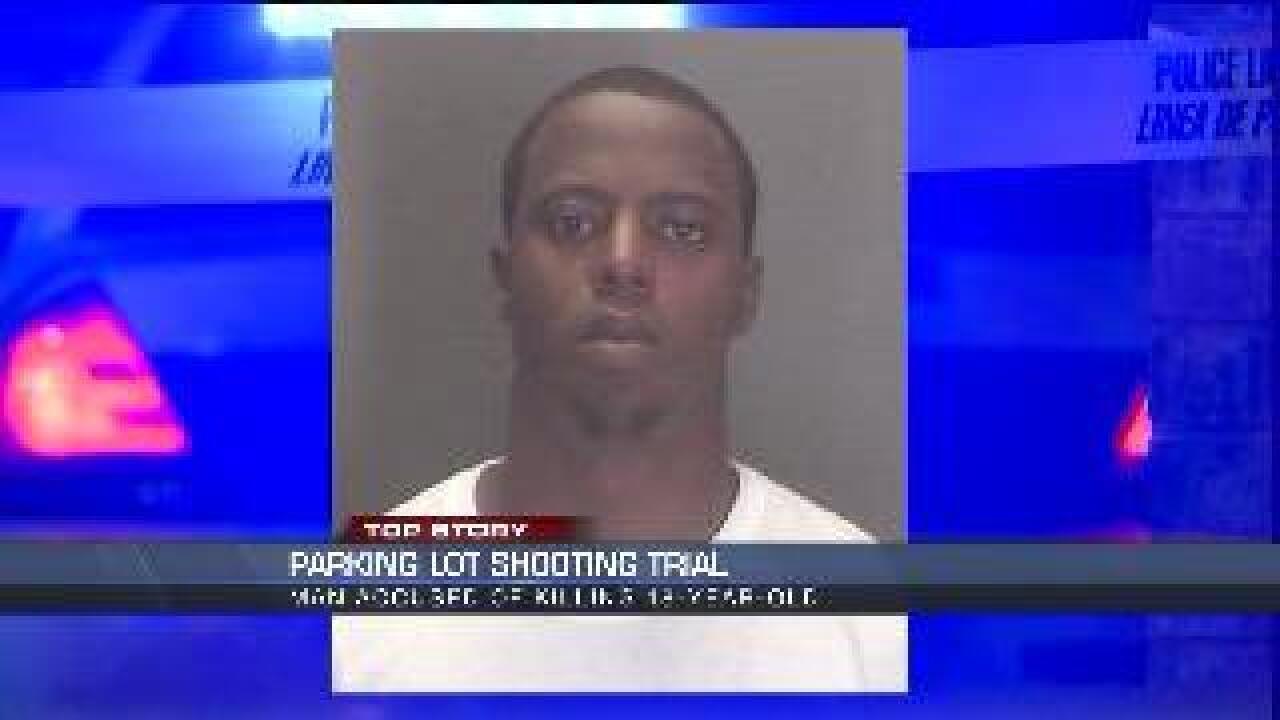 RICHMOND, Va. (WTVR) -- A man has been found guilty in connection with the murder of a teenager in the Rite-Aid parking lot at Belvidere and Broad.

Jurors deliberated for three and a half hours before finding Quinton Washington Jr. guilty of second-degree murder, a reduced charge, and use of a firearm in a felony

The trial, which stretched into a second day Wednesday, next moved to the sentencing phase, where witnesses were called.

A jury recommended Washington serve 18 years for the second-degree murder charge and three years for the weapons charge. He returns to court for official sentencing July 21.

Washington was originally on trial for first-degree murder and a weapons charge in connection with the murder of a teenager in the Rite-Aid parking lot at Belvidere and Broad.

Investigators said an argument between Quintin Washington, 28, and Marquis Richardson, 18, turned into a fatal shooting. And it's said to have happened in front of the accused gunman's six-year-old son.

Wednesday both the defense and prosecution presented closing arguments, which lasted for nearly two hours. The question presented to the jury was where did the gun used to kill Richardson come from?

The defense told the jury his client approached the vehicle where the victim was sitting in the passenger seat, to discuss why Richardson was smoking a Black and Mild cigar with Washington's asthmatic child close by. Defense lawyer David Lassister said that during that time Washington noticed Richardson had a gun. The two men started wrestling, at which time Washington shot the victim in self-defense.

However, the prosecution said that in no way was the shooting carried out to protect Washington. The Commonwealth's Attorneys told the jury that Washington approached the vehicle where the victim was laid back in the passenger seat and became angry.

That anger, according to Prosecutor Tania Stark, turned deadly as Washington shot Richardson seven times and "executed him." Stark described in detail the forensic evidence, she believes proves the victim was trying to run from the defendant before being shot to death.

The day before prosecutors and the defense team began picking a jury. The six men and six women selected will determine the fate of Washington. If he is found guilty, the same jury will decide Washington's sentence.

Before the potential jurors were even brought into a John Marshall courtroom, Judge Richard Taylor Jr. ruled on some things that would not be allowed during trial.

Judge Taylor decided a Facebook post, made by the victim before his death, would not be admissible. According to the defense, the victim posted he was "just getting out" and went on to say what he would do "if anyone gets in his way."

Defense attorney Lassister said he wanted the posting presented during trial in hopes it would demonstrate the victim was the aggressor. Lassister added the victim's background "shows it's riddled with guns and violence."

But the judge disagreed saying instead, the Facebook posting was not the "appropriate vehicle to prove reputation."

Soon after the decision to not allow the Facebook posting, Judge Taylor called a recess to allow Washington to change into a suit from his tan jail-issued attire.

Following the recess dozens of men and women were brought into the courtroom, where both the prosecution and the defense teams were allowed to question the potential jurors about any possible biases and their background.

During the questioning process prosecutors told the potential jurors that Washington shot Richardson seven times; while the defense said his client shot the victim in self-defense.

The deadly attack happened on October 3, 2013, as Washington met the mother of his son, in order to pick up the child from the Richmond Rite-Aid.

According to the prosecution, Richardson--was the new boyfriend of the child's mother and was along for the ride.