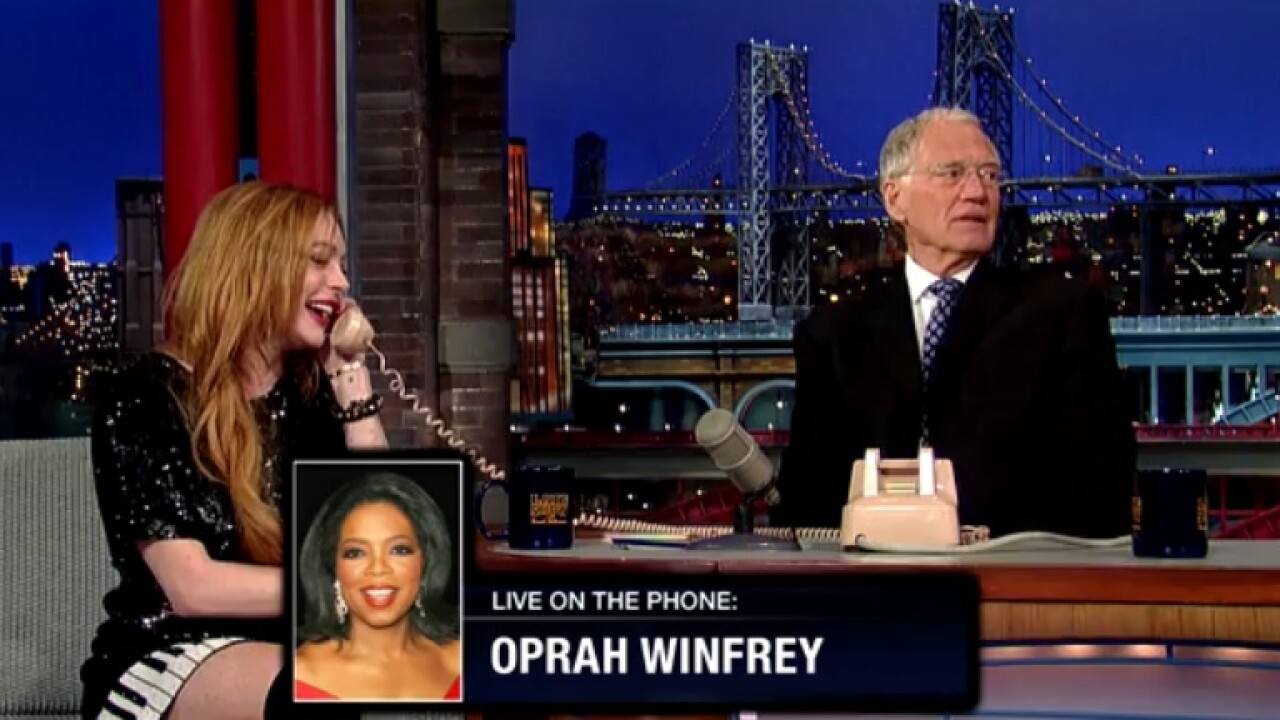 (CBS ) — David Letterman and Lindsay Lohan give a call to their mutual friend Oprah Winfrey when Lohan visits the “The Late Show with David Letterman” Wednesday night.

As Letterman and Lohan discuss the cable documentary series “Lindsay,” which follows the actress and is produced for Winfrey’s television network, Lohan, who calls Winfrey her “mentor,” says that they should give the talk show icon a call.

“I think maybe I should just call her right now,” the actress suggests, pulling out her cell phone. “Should we call Oprah?” “No, we’re not,” Letterman says. “I think so,” Lohan replies. “Is there a phone? Have you got a phone?” “We’re not calling Oprah,” Letterman responds.

As they talk, Letterman asks Winfrey how she thinks Lohan is doing now.

“No, I think she’s doing really okay,” Winfrey says. “I think, uh, you know, to have cameras following you around for every phase of your life, and you are trying to pull your life together, I think that’s a really difficult thing, so, yeah, we’re really pleased she’s making some progress,” which makes Lohan choke up.

“Oprah, I’ve spent 30 years trying to pull my life together,” Letterman replies. “Where the hell have you been?”

Oprah then brings up the fact that Letterman should be doing all right because during her last “Late Show” visit, they realized they share the same meditation teacher, “Meditation Bob,” who Lohan also visits.

Letterman then says, “You know what else, Oprah, that I’ve switched to now, that is really fantastic? Scientology,” leaving Winfrey, Lohan and the entire audience laughing.

Lohan’s entire interview, including the entire phone call with Letterman and Winfrey, can be seen on “The Late Show” at 11:35 p.m. on CBS 6.

Additionally, Lohan will be a guest star on the hit CBS comedy series “2 Broke Girls” on Monday, April 14.

Also visiting Dave are Jamie Edwards, who, at the age of 13, became the youngest person to build a nuclear fusion reactor, and a performance by musical guests Real Estate.