BOWLING GREEN, Ky. (CBS News) — The “1.5 Millionth” Corvette was dug out from the depths of a giant sinkhole at the National Corvette Museum in Kentucky.

Wednesday afternoon the team was able to successfully free the car, with final removal from the sinkhole taking place Thursday morning.

“While the car appears to be in really rough condition, most of the major components are still there and provides a great base to work off of,” said Adam Boca of the NCM Insurance Agency and a member of the Museum’s Display Committee.

The National Corvette Museum was given the opportunity to purchase the milestone car brand new to preserve its place in history.

The final Corvette to be removed is the 2001 Z06 with Mallett Hammer conversion.

“The rest of the day will be spent probing and excavating the area to find any signs of the Mallett Hammer,” said Murphy. 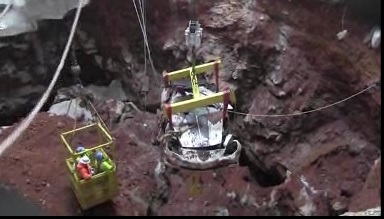