HENRICO COUNTY, Va. (WTVR) - Claude Burrows had lived in his Vassar Road home for 44 years. In that time he only had one smoke detector, the one a neighbor gave him as a gift last Christmas. Two months later, that Christmas gift saved Burrows' life.

"I guess the good Lord is looking out for me because he got the smoke detector just before the fire," Burrows, 81, said standing outside what was left of his western Henrico home.

Burrows was asleep Thursday morning when he heard the smoke alarm beep about 9:30 a.m. He first thought it was his cell phone, but quickly realized something in his kitchen was on fire.

"When I looked in the kitchen, the fire was already up to the ceiling," he said. "I called the fire department and got out."

The stove fire was ruled accidental in nature, according to Henrico Fire spokesman Capt. Daniel Rosenbaum.

"There was significant fire and smoke damage done to the residence. No injuries were reported, but the five residents, including one child are displaced," Rosenbaum added.

Burrows' dog was unable to escape the home and died as a result of the house fire.

As for the smoke alarm that saved his life, Burrows said he was grateful his neighbor noticed he did not have one and thought to do something about it. 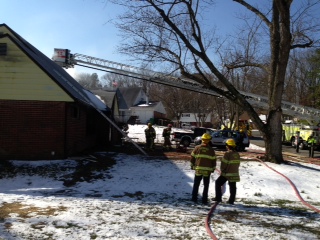 "It's a great Christmas present. I'm going to get another one as soon as I can," Burrows said. "I told her it saved my life. I am very happy that she gave it to me. I wish she'd give me another one."

The neighbor who gave the life-saving gift agreed to let Burrows and his family stay with her until they find a more permanent place to stay.

Vassar Rd. is between Gayton and Quioccasin Rds.