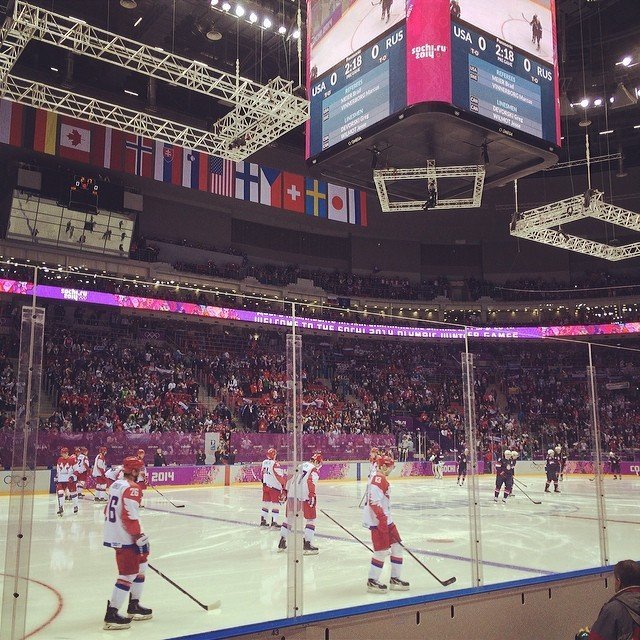 (CNN) — In a heart-pounding finish, Team USA punched a victory Saturday against Russia, in what is one of the hockey world’s greatest rivalries.

Tied 2-2 at the end of regulation, the game went into a shootout, where American T.J. Oshie scored four times on six tries to ensure a U.S. victory.

The finish was dramatic and the victory clutch, but it was also controversial. The Russians scored what appeared to be a game-winning goal in the third period, but it was disallowed because the net had moved from where it was supposed to be.

The U.S.-Russia match-up was one of the most anticipated matches at the Sochi winter games. Both hockey giants stepped onto the ice with 1-0 records in the tournament and are contenders for the gold.

While the game had a thrilling conclusion, the loss does not push Russia out of contention.

The shootout performance by Oshie, who plays professionally for the National Hockey League’s St. Louis Blues, made it look like he had nerves of steel, but that’s not the whole story.

“My hands are a little tingling, my feet are tingling,” Oshie said after the game. “It was pretty nerve-racking out there. We knew it would take 65 minutes and then some [to win].”

When the game was on the line, the United States put the match in his hands.

“I did [feel pressure] a little bit, but then the puck hits your stick and you start skating,” he said. “It’s just you and the goalie. I was fortunate enough to keep him guessing.”

The Russian goalie whom he kept guessing was Sergei Bobrovsky, who also plays in the NHL for the Columbus Blue Jackets.

“Obviously I’m very disappointed. It was a shootout; we wanted more. It is heartbreaking,” Bobrovsky said.

The atmosphere inside the Bolshoy Ice Dome was intense.

A report by NHL.com described the sounds of air horns blasting through the arena in what was mostly a pro-Russian crowd. Russian flags and chants of “Russ-ee-ya” echoed throughout, according to the report.

“It was loud, crazy, a circus-like environment,” NHL.com reported. “It was the Olympics at their finest.”

The victory gives Team USA a chance to win Group A and earn a bye into the quarterfinals.

It’s been 34 years since the United States performed its “Miracle on Ice” against Russia at Lake Placid, and match-ups between the two always carry an exciting air around them.

“Everything is OK, nothing terrible has happened,” Russian forward and former NHL’er llya Kovalchuk said. “We played good and showed our character by equalizing the game at the end and now we will be getting ready for the future.”

Russia’s two goals in regulation were scored by Pavel Datsyuk, who plays for the Detroit Red Wings.

After the Russian goal had been disallowed following a video review, the United States nearly won the game on a shot by Patrick Kane who got loose on a breakaway, but the Russian goalie blocked the shot.

In international rules, during a shootout, a team is allowed to use the same shooter after the first three rounds. Oshie took and scored on the United States’ first round. The Americans would be stopped by the Russians in the next two rounds, at which point U.S. coach Dan Bylsma decided to stick with Oshie.

The performance lifted Oshie to hero status on social media. “T.J. Oshie put his country on his back! Unreal,” one Twitter post said.