Robbery at Sandston bank Friday brings back horror for prior victim

SANDSTON, Va. (WTVR)- Henrico Police say the suspects stormed in wearing masks , heavy winter jackets, all of them carrying weapons.  It was a terrifying ordeal for folks who work inside and for customers as well.

A former customer drove by during the incident and said it brought back some really bad memories.

The robbery call came in shortly after noon.

"I heard the pop as I drove by," said Doug Sullivan who lives nearby.   "Horrible.  They need to clean this area up."  He said Friday’s scene is becoming the norm.

Police say as the four men demanded money, a shot was fired.

Nearly three years ago, Ronald Cook was shot twice inside the C&F Bank on Williamsburg Road.  "The last thing I remember is him pointing the gun at me and he said I'm going to shoot you.  Then ‘bam!’"

Cook is still haunted by that day: .40 caliber bullet fragments in his body serve as the constant reminder.   "I don't go to the teller anymore," he said.

Cook says he vividly remembers the teller's eyes growing with fear, during his incident as they filled with fear.  He can only guess it was a similar situation Friday.  “It made my stomach cringe, the thought of those poor people having to go through it again," Cook said.

Police say this time the suspects made off with cash, fleeing in a green colored SUV.  Somehow, no one was hurt, but Cook insists the robber roulette needs to be addressed with more than just better surveillance systems.

"They need a security guard that can hit the lock button if these sketchy characters approach the bank," he said.

The suspects are still at large.  Police hope someone in the public knows something about the crime or saw something suspicious Friday afternoon. 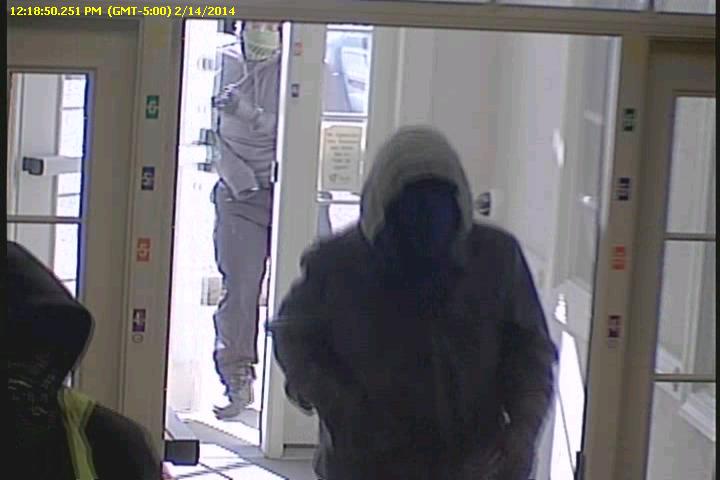