Editor’s note: Do you have a weight-loss success story to share? Tell us how you did it, and you could be featured in our weekly weight-loss story on WTVR.com.

(CNN) — Mario Colao jolted out of bed at 3 in the morning. He was covered in sweat, his left arm was completely numb and his heart was pounding violently.

He started crying because he was terrified of what was happening to him.

That night in January 2010 was the third time in two weeks his sleep had been interrupted by heart attack-like symptoms, and he thought he knew why.

“It’s sad to say, but I felt like I deserved this because I never took care of myself,” Colao says. 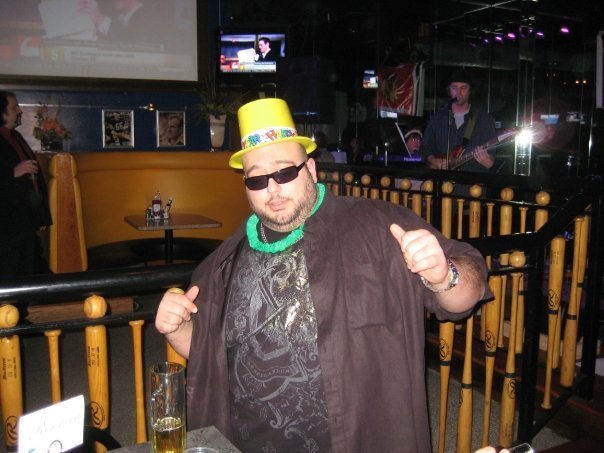 He was 28, weighed 460 pounds and wore size 6X clothing. He knew his habits of binge drinking, smoking two packs of cigarettes a day and overindulging in food were slowly killing him.

“I asked God to give me another chance,” Colao says, “and I passed out.”

The Chicago native had been overweight since childhood. He was born into an Italian family where food was at the center of everything. His parents worked long hours, so his grandfather played a large role in raising him.

“Food became a total escape,” he says. “I always considered it my drug.”

The weight kept piling on through adolescence and beyond. At 18, he started smoking. He began to drink heavily when he was 22. All the while he continued to eat unhealthy foods day and night.

On his blog, I’ve Said It All Before, Colao gives examples of some of his regular meals at the time. One included two burgers, a large soda, large French fries and chicken nuggets, totaling more than 2,400 calories.

By 2010, Colao was drinking up to 10 drinks in one night and smoking two packs of cigarettes a day. But after those scary symptoms kept waking him up, he made a pact with himself to change.

“I quit smoking and stopped eating everything that was bad,” he says.

Colao’s parents bought him a treadmill because he was uncomfortable exercising in a gym. “That’s what really helped me the most — being able to gain the physical and mental stability and work out on my own,” he recalls.

He started by walking and slowly worked his way up to jogging and weightlifting.

Colao overhauled his diet as well. He stopped eating fast food, fried food and red meat and drinking soda. He forced himself to get accustomed to healthy alternatives while allowing himself to indulge in small things so he wouldn’t feel overwhelmed.

He was motivated to change his eating habits by realizing how much time he would have to exercise to burn off the foods he was consuming.

Over the first couple of months, Colao dropped 50 pounds. The loss drove him to continue, and he set a goal of losing 200 pounds.

When he had lost down to 305 pounds, Colao went through a difficult breakup and eased up on his calorie counting and exercising habits. Six months later, he had gained back 40 pounds.

Scared he would continue gaining weight, he got back on the wagon.

“I ended up being so angry at how bad I had gotten again, that I forced myself to get back on track,” he remembers.

As a reward for reaching his goal of a 200-pound weight loss, Colao booked a trip to Philadelphia to run up the steps of the Philadelphia Museum of Art and re-create a famous scene from the movie “Rocky.” He was on course to hit his goal when a foot fracture sidelined him for a few weeks.

When the trip to Philadelphia approached, Colao had lost 185 pounds and was just shy of his goal. Regardless, he decided to go and run up those stairs.

Colao finally hit his goal weight of 260 pounds in October. He still wants to lose another 20 to 30 pounds, but his focus has moved toward challenging himself with new exercises. He’s also weightlifting to tone up some loose skin that has developed around his arms and stomach.

Through his journey, Colao has found support and motivation in his parents and girlfriend, Julia Gonzalez. He says he still struggles to see himself in his slimmer body, and Gonzalez pushes him to look on the bright side.

“I’m always going to be a positive voice for him to remember what a great thing he’s accomplished,” she says. “He inspires so many people. People see him, and they realize that they can do it, too.”

Colao is using his experience to become a certified personal trainer.

“My main desire is to help people like me — people that are obese and feel hopeless about the situation,” he says.

Four years ago, Colao could not tie his shoes without losing his breath. A few weeks ago, he did a push-up for the first time. In two months, he hopes to be a certified personal trainer and well on his way to helping others reach their weight-loss goals.