(CNN) — In the end, a coupon changed Torrie Creamer’s life.

Years of New Year’s resolutions hadn’t done it. Her son’s probing questions about her “still pregnant” belly hadn’t done it. Hurtful comments from a friend about another obese woman at a ballgame had only primed her desire to lose weight.

Then the LivingSocial deal arrived in her inbox. For $25, she could take four weeks of classes at a women’s fitness boot camp. And after the incident at the ballpark, Creamer was ready to try just about anything.

The Norfolk, Virginia, resident had been steadily gaining weight since she married her high school sweetheart Jason more than 10 years before. Each kid — Jordan, then Gabriel, then Kameron — added extra pounds she couldn’t seem to shake. By 2011, she was 5-foot-11 and weighed 322 pounds. 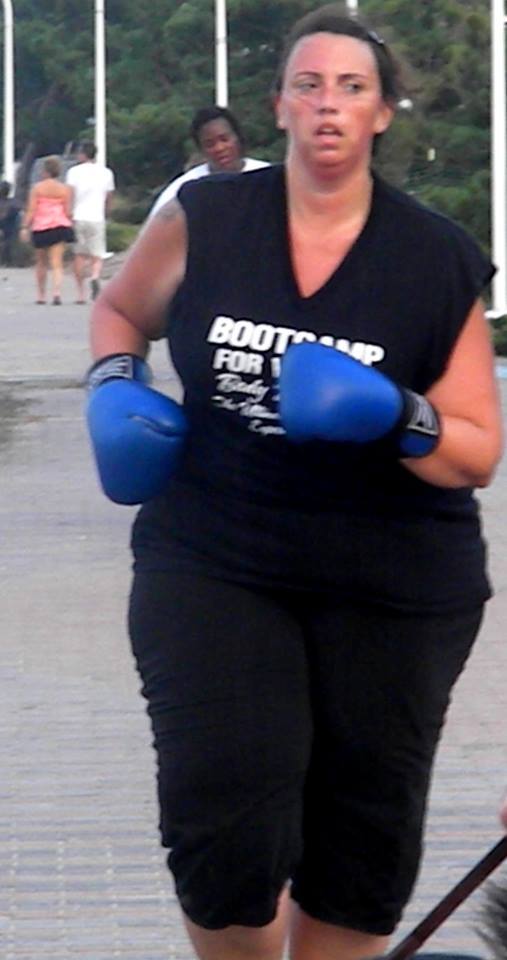 Boot camps have become popular in the fitness community over the past decade, earning praise for their focus on high-intensity intervals and body weight exercises. Trainer Ken Williams started Bootcamp for Women – Body by Ken with five members in May 2002. By July, it was standing room only.

Walking toward the beach for her first workout, Creamer spotted women running back and forth in the sand. She hesitantly joined in and promptly fell down. It took three male trainers to pick her back up.

Creamer left the class crying. But the next day she returned, and she continued to go to every class for the next four weeks.

“I was always the last runner in, or in my case, the last walker in,” she says. “I could not do push-ups. I could not finish a routine without feeling like I was dying and about to vomit. But somehow I made it there.”

She lost 15 pounds in four weeks and told Williams she was coming back.

The next day Creamer found out she had been laid off from her job. She left a message for Williams saying she couldn’t afford the program without a steady income and figured that was that.

But that night she got a phone call from someone in the group. The women talked and were going to chip in so Creamer could continue to work out.

“I sat on my porch thinking to myself, ‘These people don’t know me,'” Creamer says. “At that moment I made the promise to myself… if these people were not letting me fail, then how can I let myself fail?”

Creamer committed to 12 more weeks of boot camp. Each week it got easier for her to complete Williams’ grueling workout. She continually increased her goals and spoke with Williams about changes she could make when she hit a plateau. When the 12 weeks were over, she came back again.

Creamer also overhauled her diet. She used to eat a bowl of ice cream every night before going to sleep; she loved “any and all” fried foods, carbohydrates and sweets. Now she eats six small meals a day, using a child’s plate to control her portion sizes.

Her typical day consists of:

— A protein shake with oatmeal for breakfast

— Mixed nuts for a morning snack

— A turkey salad sandwich for lunch

— Yogurt with fruit for an afternoon snack

— Chicken with vegetables and “good carbs” for dinner

— And another protein shake for a post-dinner snack

All the people Williams has seen lose a significant amount of weight have one thing in common, he says: “They’re tired of being sick and tired.”

Since that fateful day on the beach, Creamer has lost 145 pounds. She’s happier and more positive than she’s ever been, and it shows in every aspect of her life.

She loves having enough energy to play with her kids. And she’s introduced a ton of new customers to Williams’ program. She’s determined to spread her “healthy hugs” to other overweight women who are suffering.

“I feel like this is what I truly was put here to do, and honestly it (took) hitting rock bottom before I could understand that,” Creamer says. “If I can do it, so can you.”