Dad turns kids’ lunches into works of art – every day

RICHMOND, Va. (WTVR) – I don’t know how things work in your house in the time between when your children wake up and the time they leave for school.

Controlled chaos is a term that comes to mind to describe mine.

That is one reason why I found this story so amazing.

David LaFerriere is a Massachusetts-based graphic designer. That’s not so amazing.

He makes lunches for his sons before school. Again, not so amazing.

But what is amazing is what he does to the sandwiches.

He turns them into works of art – every day.

“I’ve been doing it for my kids since they were little,” LaFerriere told Flickr, the photo-sharing website where he posted his creations. “They love it, and nothing makes me happier than hearing their reaction at the end of the day.”

LaFerriere said he’s been doing this since 2008, but recently his art has gained a lot of attention.

LaFerriere uses a Sharpie marker to draw directly onto the sandwich bags. Sharpie took notice and featured his work on their blog.

“I’ll draw a fish around the bubble as if he’s about to eat it,” he said.

LaFerriere said while he creates the designs for his children, he’s impressed with the response he’s has received from around the world.

“The comments people leave about a parent doing something similar really touches me, because there are other parents that love their kids just as much,” LaFerriere told Flickr. “They love them enough to leave a little note, a little whatever it may be. That’s just something that brightens their day when they get to their lunch.”

David LaFerriere was gracious enough to allow us to share some of this photographs with you in the gallery below. Visit his Flickr photo stream page to see even more. 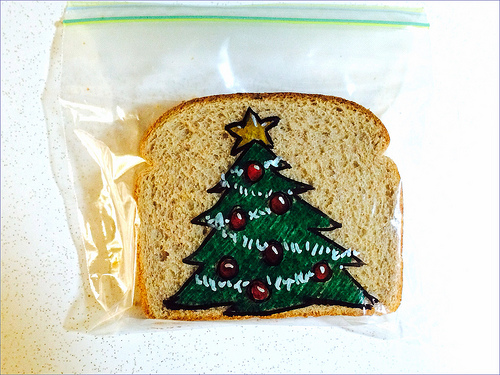