Nathaniel Bryant, 54, of Narbeth Ave., is charged with bank robbery.

Police said the robber never displayed a gun during the crime. 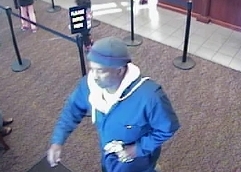 “At 3:03 p.m., a man walked into the BB&T Bank at 4710 Walmsley Boulevard and passed a note to the teller that demanded money. He did not display a weapon and left on foot,” police wrote in a media advisory. “The suspect is described as a black male with a medium build. He is approximately six feet tall. The suspect was wearing royal blue all-weather coveralls, a tan hooded sweatshirt, a gray hat and white shoes. He was carrying a dark zippered bag.”

Police asked anyone with information call Crime Stoppers at 780-1000.