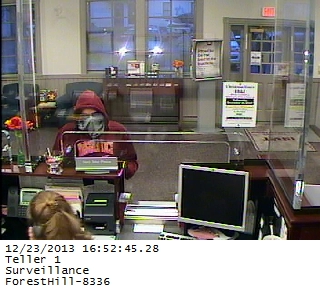 RICHMOND, Va. (WTVR) – Police are looking for a man who tried to rob the BB&T bank along the 6900 block of Forest Hill Ave., according to Richmond Police.

The suspect is described as a white man wearing a Virginia Tech sweatshirt, sunglasses and  green mask. Police said the would-be robber was between 5’5″ and 5’7″.

The man ran out of the bank before the teller handed over any money, police said. No weapon was displayed and no one was hurt.

Police are using dogs to search for the suspect.