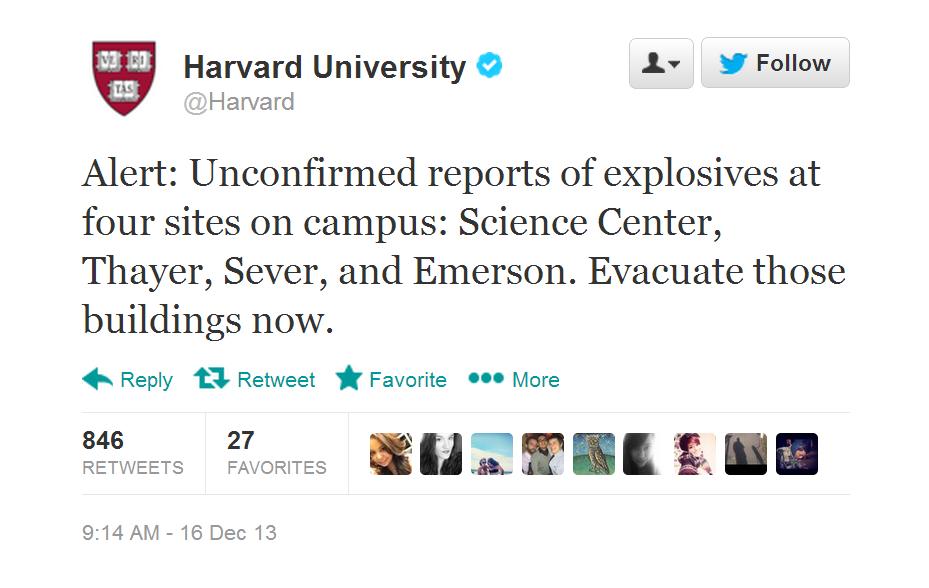 No explosions were reported, and law enforcement personnel were checking the buildings. While the investigation wasn’t complete, the threat appears to be a hoax, two law enforcement sources told CNN late Monday morning.

The school said around 9 a.m. that it was evacuating three academic buildings — the Harvard Science Center, Sever Hall and Emerson Hall — and a freshman dormitory, Thayer Hall, because of an unconfirmed report that bombs had been placed there.

“Out of an abundance of caution, the buildings have been evacuated while the report is investigated,” Harvard said on the emergency page of its website. “Harvard’s focus is on the safety of our students, faculty and staff.”

The morning’s final exams in the affected buildings were canceled because of the report, student newspaper The Harvard Crimson posted on Twitter, citing Harvard Dean of Freshmen Thomas Dingman.

Harvard University and Cambridge police were on the scene investigating. The bomb report was made by phone, and the FBI is also among the investigating agencies, a law enforcement official told CNN.

Around 11 a.m., Cambridge police said they’d been given an all-clear to open roads around Harvard Square, the Cambridge commercial center near Harvard’s campus. The square had been shut down because of the report.

Some students were taking final exams in the affected buildings when the evacuations were ordered, said student Sam Weinstock, incoming president of The Harvard Crimson.

At least some of the evacuees were taken to a freshman dining hall, where they were told their Monday morning exams would be canceled, Weinstock told CNN.

Elsewhere on campus, Weinstock said, students were “more or less going about their days.”

The school notified the campus community of the evacuations through its emergency alert system, which includes text and e-mail messages, Weinstock said.

Harvard’s final exams for the fall term began last week and are scheduled to go through Friday.