RICHMOND, Va. – Overeating, exercising, sleeping, and spending time with friend are just some of the ways VCU students said they manage their stress during final exams, which started this week. As part of its Stress Relief Week in preparation for finals, VCU’s Wellness Resource Center, also known as The Well, even offered free massages on campus.

Dr. Amanda McGann, health educator at The Well, said Stress Relief Week started 10 years ago as a way “to give students resources about healthy ways to relieve stress.” This year, The Well offered free 5-minute massages to students and stress relief packages, which included snacks for study breaks. 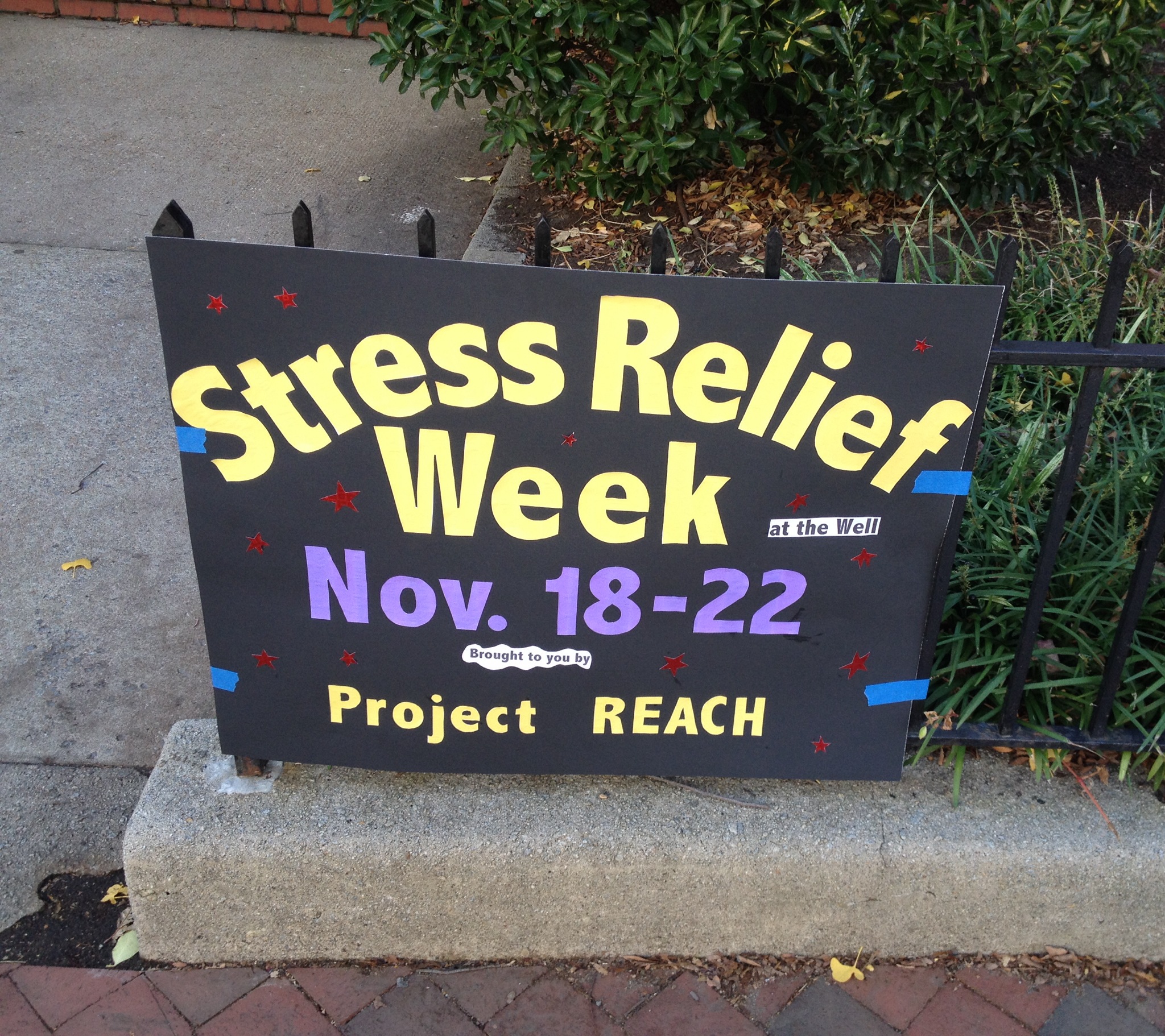 McGann said that students need to be informed of “healthy ways to relieve stress and other things that they can do around campus to minimize that stress before exam week starts.” According to her, stress has climbed the list of reasons why students don’t do well in college.

“Actually right now, it’s the number one reason out of 34 that students don’t do well academically. That’s here at VCU and also nationally,” McGann said. The Well focuses on helping students learn “skills based techniques” to manage stress throughout the semester, although McGann said she sees an “influx of students” to The Well especially during midterm and final exams.

“Stress impacts so many parts of our lives, from relationships to physiological effects,” McGann said. Skills based techniques that McGann teaches students can include time management, sleep, ways to live a healthier lifestyle, deep breathing, progressive muscle relaxation and the benefits of yoga and meditation. McGann thinks students can see “vast improvements,” if they connect with resources on campus to help them manage stress.

The Well offers resources for students to manage their stress, but it doesn’t offer therapy. McGann said some students could benefit from therapy offered through VCU’s University Counseling Services, and many times she’ll work with students on skills based techniques while they’re in therapy. Counselors at University Counseling Services are also trained to help students who may feel suicidal.

Dr. Lyndon Aguiar, outreach coordinator at University Counseling Services, said often students who are feeling suicidal suffer from pre-existing depression. “It’s not just being sad, it’s a feeling of hopelessness and feeling overwhelmed, and that stress can exacerbate that,” Aguiar said of students who are dealing with the stress of college and adjustments.

Students are referred to counseling services by friends, residential assistants, professors, roommates or other on-campus departments, such as Student Health Services. If students are feeling suicidal, “We’ll meet with them immediately and talk to them about their concerns, and get a sense of severity,” Aguiar said. From there, a counselor will develop a safety plan.

Aguiar said it’s common for anxiety to go up on both VCU campuses during the the spring semester, but “more so the medical campus in my opinion.” But many students also seek help from counseling services during the fall semester.

“When the semester starts, we get slammed. We get students that are already like realizing that they want to get some therapy before they hit the wall, so they come in earlier,” Aguiar said. Overall, most students come in for counseling due to anxiety, relationship problems or depression.

Students can even call the after hours emergency police line, if there’s a crisis. VCU Police will notify the on-call counselor, who will then get in contact with the student. Since January, there have been a total of 98 calls. However, there’s no indication how many of these calls dealt with suicidal ideation. Referrals could be made for other issues, such as addiction, depression or simply a student feeling overwhelmed and needing someone to talk to.

“Most of the crisis calls are related to emotional containment, dealing with anxiety or assessing the student’s thoughts … if they have any suicidal thoughts,” Aguiar said. The last confirmed suicide on VCU’s campus was in 2010, but nationally suicide among college students is lower than for young adults not enrolled in college, Aguiar said.

“If you look at the population of the same age group in the community, the risk of suicide is doubled that of students who are in college,” he said. “Students have more protective factors than their non-college peers.” These protective factors can include higher education levels, increased support systems, greater financial resources or access to healthcare and other services.

“More students are just aware of mental health issues in general. There appears to be less stigma related to coming in for help and getting some therapy. I feel like over the years, more students are self referring,” Aguiar said.

Students who came into The Well during Stress Relief Week last month said they were aware of the resources VCU offered, but felt like they were able to manage their stress on their own. Yusra Ahmed said she gets stressed around final exams, because “when I go back and read everything I’ve done throughout the semester, it just feels like everything’s being piled up on me and it stresses me out.” Ahmed said she either goes to the gym or writes to help relieve her stress. Sometimes she gets headaches from stress, “but other than that, I think I’m pretty good with managing it.”

Student Hanna Kedir said she isn’t stressed out by tests as much as she is by having all of her work due at once. “I was stressed at the fact that I had to do exams and work for the classes. That’s what stressed me out, not the midterms,” she said. Like Ahmed, Kedir goes to the gym and sleeps to relieve her stress. Kedir noticed that she’s been getting sick a lot as a result from stress, “probably because I don’t get enough sleep.”

In addition to being a college student, Jon Miranda works a full-time job. Miranda said he tries to plan his college schedule around work, but gets stressed around finals, “mostly because my classes kind of like to drop the bomb altogether at once. I feel like my teachers kind of form a coalition and give me all the homework at once.”

Forum Sanghavi, a pre-med student, feels not only more stressed during finals, but more focused. “I stress out every round of tests really, but the finals are really what makes or breaks your grade, so I stress out significantly more,” she said. Sanghavi manages her workload and stress by rotating between sleeping and studying.

Sanghavi is also a residential assistant in a freshmen dorm on campus, and was taught where to direct students if they’re feeling suicidal or overwhelmed. “The amount of resources that they’ve taught us to point other students towards is very nice,” she said.

“There’s so many places that people can turn, so I definitely think that VCU offers a lot of support in whatever way that you need it,” said Sanghavi, who will finish the fall semester next week.

By Katherine Johnson (Special to WTVR.com)