RICHMOND, Va – More than 3,000 comic book fans headed to the VA Comicon event at the Richmond International Raceway this weekend. For the first time held at a large convention location, the two-day comic book show featured vendors from around Virginia as well as well-known comic book writers and artists and put the spotlight on the growing comic book culture here. 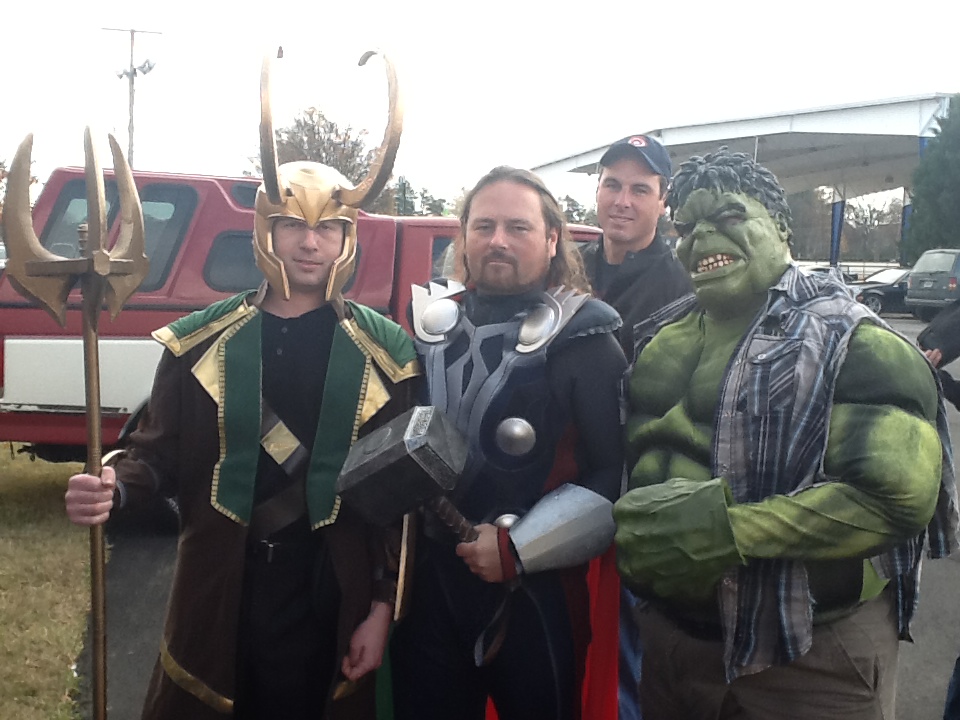 Many visitors to VA Comicon dressed in costumes, called cosplay, trying to resemble characters from a variety of series and shows from My Little Pony to Doctor Who. Former marine Brandon Williams was a notable cosplayer at the event, standing on stilts for his cosplay of a Blood Angel space marine from the tabletop game Warhammer 40,000.

“There’s always something you can add,” Williams said. “You can always go back and rebuild.” He thinks cosplayers should be proud of the time and energy they put into their cosplay.

VA Comicon at the Raceway featured around 50 antique comic vendors on Saturday and Sunday and travelers drove as far as from Maryland to see the comic books.

“People are buying comics from us and we’re networking with people,” said Rob Kaylin of Laughing Ogre Comics. “The best thing to get out of this is to see more customers come to our store.”

The event also featured more than 80 artists, which included print artist Alan Moorefield, “He-Man” comic artist Pop Mhan as well as specialty artists like model and entertainer Yaya Han. The biggest name at the event was Rob Liefeld, founder of Image Comics and creator of the famous comic character Deadpool.

Liefeld said that VA Comicon has been one of his favorite conventions in a long time. “People are very kind and patient,” Liefeld said. “Every time I travel east, I have a positive experience.”

Liefeld enjoyed how genuine the fans were and how invested they are in his books. He especially loves the convention atmosphere as it was something that wasn’t as common when he was younger.

Liefeld spent the event signing copies of his comics and greeting fans like Jennifer Myrna and her daughter Rebecca, who had waited two hours just to meet him.

The event showed that Richmond has become a hub for finding comic books and people who are also interested in comic culture. Marvin Humphrey, assistant manager of Nostalgia Plus at the Shops at Willow Lawn, said that the city is more accepting of comic culture than one would expect. Fans are now able to visit many shops that cater to their comic book likes, whether it is buying new releases, searching for vintage comics or finding merchandise related to popular series.

“Richmond has so many stores. Now it has become more accepted to read comics,” Humphrey said. “When I was young, I had to hide my comics, because it wasn’t cool.”

Humphrey, who has been working in comic book stores for 30 years, added that many of his customers tend to be older, retired people, although he sees people in their late teens and early 20’s coming in as well now. He found that television series and the movies tend to influence the demand and sales of certain materials, with shows like “The Walking Dead” having an impact on sales of back issues.

In Richmond, there are also some comic book fans now looking to make their own comics. At Virginia Commonwealth University, a new group has formed called VCU Comics, which aims to pair student writers and artists together and create a comic anthology. VCU Comics content editor Hannah Lazarte, a communication arts student, said the group was founded with the goal to “grow the comics community in Richmond.”

By Alex Carrigan (Special to WTVR.com)