RICHMOND, Va. – It took several hours until supporters of Gov.-elect Terry McAuliffe were able to cheer his election victory. In an unexpectedly close race with his opponents, Republican Ken Cuccinelli and Libertarian Robert Sarvis, McAuliffe was able to edge out a narrow victory at the end of Tuesday night. While Cuccinelli had carried a lead most of the evening, it was McAuliffe who won with 48 percent as results from the metropolitan areas of the state were posted. Cuccinelli won 45 percent of the vote and Sarvis 7 percent. 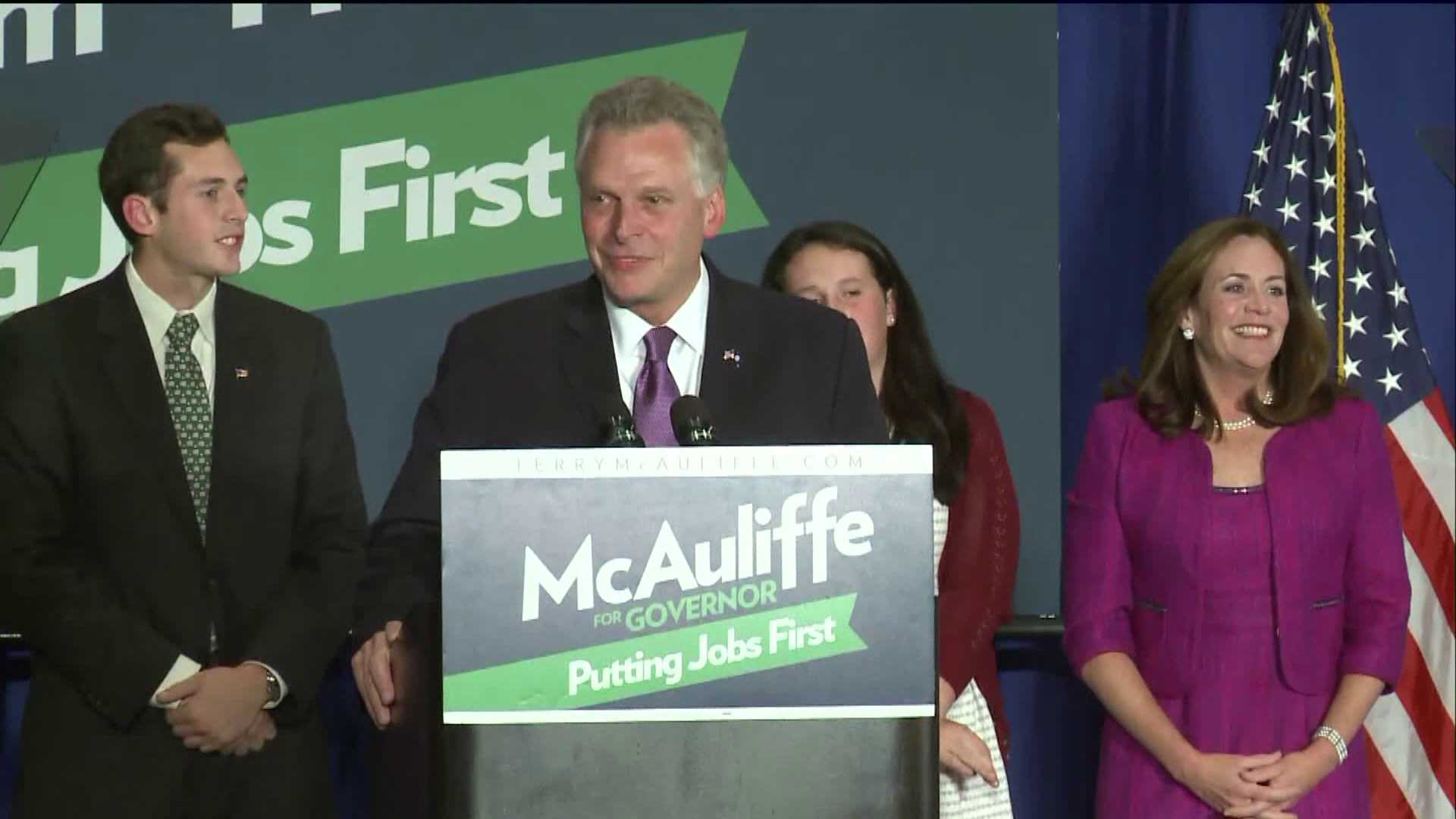 Reporters from VCU’s “iPadJournos” project covered the election parties of all three candidates live on Twitter and interviewed their supporters. They talked to Democrats in Tysons Corner and Republicans and Libertarian in Richmond and reported on the victory and concession speeches of the candidates.

Starting out election night with an election party at the Sheraton Hotel in Tysons Corner, Terry McAuliffe and his supporters were still anticipating a possible Democratic sweep. But as only Ralph Northam easily defeated his Republican opponent E.W. Jackson in the race for lieutenant governor, the mood grew anxious for a while.

But at the end of the night, as McAuliffe took the stage with his wife Dorthie and their five children, supporters broke out in exiting cheers.

“I promise you tonight that I will be a governor for all Virginians,” said McAuliffe. “The real test is my actions when I take office. I expect you to hold me to my pledge to work with both sides.”

Bipartisanship was a recurring theme in McAuliffe’s victory speech. He even went as far as thanking his opponent for his service acknowledging outgoing Gov. Bob McDonnell’s successes of low unemployment and the passage of the transportation funding bill.

“The truth is, this election was never a choice between Democrats and Republicans,” said McAuliffe. “It was a choice about whether Virginia would continue the mainstream, bipartisan tradition that has served us so well over the last decade.”

McAuliffe supporter Ashley Smith, a board member with The Human Rights Campaign, was surprised that the election was so close, but was glad to see that that so many Virginians came out to vote.

“This shows and proves that it’s very important that every vote counts,” said Smith, who was also enthusiastic about a McAuliffe’s governorship, citing marriage equality as a key issue facing the state.

“I think Terry McAuliffe is going to open the minds of a lot of Virginians,” Smith said. “Being that I fight for LGBT rights on a regular basis, I would love for the state of Virginia to be able to pass and have marriage equality.”

McAuliffe supporter Francesca Ernst, who is volunteering with The Human Rights Campaign, said Terry McAuliffe was the best candidate for Virginia.

Ernst also believes that McAuliffe’s election will send the message to lawmakers that women have a voice in deciding the outcome of elections.

“If anything, the victor today says to the General Assembly and to Ken Cuccinelli in particular, enough is enough,” said Ernst. “We can’t have this extremism. Women are 50 percent of the vote, 50 percent of the population, and it’s time to start respecting us as such.”

After a nail-biting finish, Ken Cuccinelli conceded to McAuliffe, but remained optimistic about the future of conservative ideals.

“That battle goes on,” he said to a crowd of his supporters at the Richmond Marriott.
In his closing speech, Cuccinelli also spoke on how big of an impact Obamacare had in this election.

“We said this race was a referendum on Obamacare and although I lost, tonight you sent a message to the President of the United States that Virginia understands Obamacare is a failure and that you want to be in charge of your health care and not the government,” Cuccinelli said.

“Despite being outspent by $15 million, this race came down to the wire because of Obamacare,” Cuccinelli added.

Many of the supporters at the election party blamed Libertarian Robert Sarvis for taking away key votes that could have changed outcome, if they had been casted for Cuccinelli.

“It certainly did have an effect. He’s not a Libertarian, he doesn’t believe in Libertarian principles. It’s obvious by his words, not my words,” Craig Johnson, radio host of “The REALLY, Real, Deal with Brother Craig: The Hatchet Man,” said about Sarvis. “He sells himself as a Libertarian, convinces 7 percent to vote for him and which side do they come from? They obviously come from the Republican side.”

Many Republican voters also thought that the campaign was one of the dirtiest in history. Many felt that McAuliffe and the Democrats attacked Cuccinelli and the Republican party throughout the campaign on social issues, making claims that they said were not true.

“I agree with the statement made earlier that Terry McAuliffe ran the dirtiest campaign in history,” Republican voter Liz Garrison said. “Terry McAuliffe never really got on there and said anything that he plans to do. All he did was throw mud at Ken Cuccinelli.”

But besides the disappointment of many Cuccinelli supporters on Tuesday evening, there was also a brief uproar at the event. While Republicans were eagerly awaiting the election results at the Richmond Marriott, an unidentified man stepped onto the stage and starting shouting about immigration reform. Shortly after, a group of demonstrators from CASA In Action started chanting as well and passing out fliers about immigration reform.

“The Republican Party has been really reluctant to speak about it [immigration reform] and to bring it up for a vote, especially John Boehner and Congress,” said Renato Mendoza, community organizer for CASA In Action in an interview after the demonstration. “We want to create dialogue within the Republican Party.

“I know that it’s having a lot of issues, especially after the shutdown, they were getting a lot of heat. We want to create dialogue here in Virginia, in Eric Cantor’s district,” he added. “Immigration reform is something they need to really consider passing.”

The demonstration left Cuccinelli supporters baffled for a moment, but it was soon forgotten as election results started coming in and the nail-biter election took its course.

At the end of the night, after his defeat became apparent, Cuccinelli showed his appreciation to all of his supporters who have helped him in the election campaign.

“I want to thank you all for love and support. I’m grateful to God for the opportunity to represent all of you, all 8.2 million Virginians now as the Republican nominee for governor, but also as the attorney general and before that in the state senate,” Cuccinelli said. “I still believe that the greatest resource we have in Virginia is Virginians, no election can change that.”

Most of the supporters at Robert Sarvis’ election party at the Tobacco Company in Richmond were hoping that their candidate would end the night with 10 percent of the votes.

In the end, Sarvis landed below 10 percent, but his supporters were still excited about the strong showing the third-party candidate had in the gubernatorial race. Sarvis and his wife Astrid watched the results at the restaurant with their supporters.

Others who attended the event, such as emergency services coordinator Matthew Williams, were drawn to Sarvis by how different he was from his opponents McAuliffe and Cuccinelli.

“It was important for me to have a candidate who has values and wasn’t a corrupt politician,” Williams said.

Williams also said a Sarvis win would have been “the most amazing thing in the universe,” because he felt it meant having a fiscally conservative governor open to diversity.

Sarvis himself spent most of the evening walking around, shaking hands with supporters and talking personally to them. He also discussed how he thought he did compared to his opponents.

“I’m the only person who has earned every single vote I’ve gotten,” Sarvis said. “The other two kind of started with a built-in party loyalty, and there were a lot of people who are very upset with those two candidates. If people didn’t feel like they needed to vote for the lesser of two evils and voted for the person they thought was best for Virginia, I think I would have won by a landslide.”

After the results were announced, Sarvis was introduced by his wife Astrid and gave his concession speech. He thanked various members of his staff and his many supporters.

“We should recognize that whoever is the governor at the end of the night has our support when they do the right things, and that we’re criticizing them constructively when we think they’re doing the wrong things,” Sarvis said.