RICHMOND, Va. – As if the refusal by the Richmond Times-Dispatch to endorse any candidate in the gubernatorial race hadn’t been enough, the Danville Register & Bee came out with an editorial on Sunday that endorsed Libertarian candidate Robert Sarvis.

It was another refusal by a daily newspaper in Virginia to endorse Democrat Terry McAuliffe or Republican Ken Cuccinelli for governor. Neither of the three candidates swayed the Richmond Times-Dispatch, the Lynchburg News & Advance or the Roanoke Times to endorse them. And the Daily Progress in Charlottesville even called for a write-in campaign for Lt. Gov. Bill Bolling. 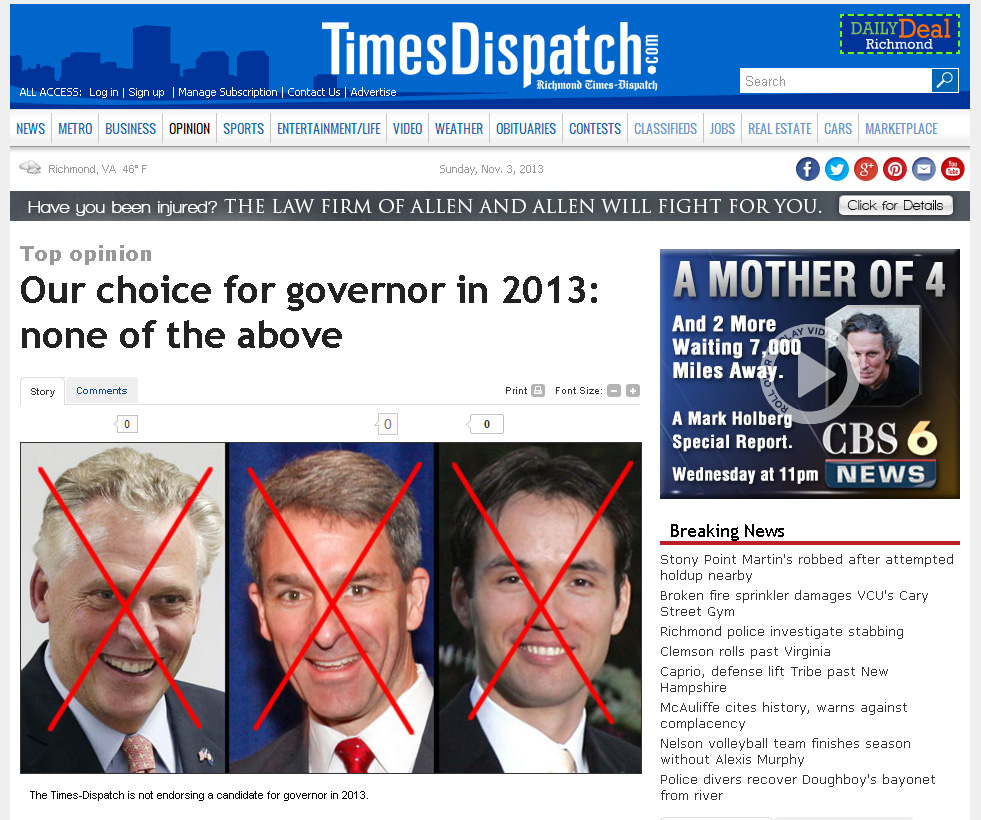 “I think this is the first time that any newspaper in Virginia has endorsed a third party,” said South. “The fact that the Libertarian candidate has a fairly major newspaper endorsement in Virginia says a lot about the other candidates.

“In this case, it says that both the Democratic candidate McAuliffe and the Republican candidate Cuccinelli have very high negatives and editorial writers as well as the general populace is looking at both of those candidates and wondering ‘Do I really want to vote for either one?’ and some people are saying no,” South said.

He added that he doesn’t believe a newspaper should be telling voters to cast what he describes as “a protest vote.”

“It is really unusual for a newspaper to say, ‘Well this year we’re simply not going to endorse anyone,’” said South.

“It really is going to be McAuliffe or Cuccinelli come election night and for a newspaper to say ‘Don’t vote for either one’, it’s saying that you’re not going to have a voice in the outcome.”

Read about the endorsements and non-endorsements in the governor’s race by the leading newspapers in Virginia:

The Richmond Times-Dispatch flatly wrote that it “cannot in good conscience endorse a candidate for governor.”

The Times-Dispatch, which historically has endorsed Republican candidates seeking Virginia’s top office, explained that it would not be giving the nod to Cuccinelli because he “not only takes stands we find objectionable but pursues his divisive agenda with a stridency that was unbecoming in an attorney general and would be unbecoming in a governor.” The editorial board also noted that it would have endorsed Lt.Gov. Bill Bolling had he been given the nomination.

About McAuliffe, the Times-Dispatch wrote, “His inclinations do not conform to Virginia’s history of fiscal restraint.” The newspaper also addressed Sarvis, adding that he “has neither embarrassed himself nor insulted the commonwealth,” but he “lacks the experience the job demands.”

In possibly the most scathing of the editorials by newspapers in Virginia, The Roanoke Times announced that it would also not be endorsing a candidate for governor.

“The sordid filth that has set the tone of the campaign and underscored the defects of the candidates,” wrote the newspaper, “viewed in the context of a Capital already shaken with scandal, has deepened our qualms over backing any of the three men running for governor.” While critical of his controversial stances on social issues, the editorial indicated that Cuccinelli’s greatest shortcoming was his “obstructionism” that “would condemn the state to four numb years of status quo under the most appealing scenario, decay and disarray under the most likely scenario.”

The Roanoke Times also wrote, “Those who cannot in good conscience vote for the official candidates should consider writing in Lt. Gov. Bill Bolling.” McAuliffe was referenced more favorably, but The Roanoke Times questioned his ability to fulfill promises made during his campaign. “McAuliffe cuts a more flamboyant figure as a salesman, a role he says would dominate his gubernatorial agenda,” wrote the newspaper. “But his “no muss, no fuss, no spills” pitches translate better in the parking lot of Happy’s, than they would in the house and senate chambers, where he’s likely to be met with skepticism.” Happy’s is a popular flea market in Roanoke.

The Roanoke Times described Sarvis as “naïve” and “charmingly pure,” but noted that his proposals to eliminate the income tax rendered him incapable of running a state government.

The News & Advance in Lynchburg

The News & Advance in Lynchburg wrote, “Put simply, not one of the three candidates for governor deserves the office.” The newspaper criticized McAuliffe for his business ventures and described the Democratic nominee as “a self-promoting salesman, a huckster with hardly any experience that qualifies him to be governor.”

Cuccinelli was defined as an “uncompromising ideologue” and “one of the most in-your-face and abrasive politicians on the scene in Virginia today.” The newspaper wrote, “Cuccinelli, to be blunt, is a conservative extremist, and history has shown us time and again that extremists of any stripe are not good for the body politic.” Sarvis was also dismissed as an inexperienced candidate who is “not a serious contender for the office.”

The Danville Register & Bee decided to endorse Sarvis on Sunday, marking it the first time the newspaper has endorsed a Libertarian candidate for public office.

“Our endorsement of Robert Sarvis for governor was in some ways a process of elimination that stemmed from a failure of the Republican and Democratic parties to nominate candidates that we could support — and the voters could have confidence in,” the newspaper wrote in the editorial.

The Register & Bee’s editorial board said it “lost confidence” in McAuliffe and notes problems surrounding Cuccinelli, such as gift acceptance from the same donor in the scandal that hurt the reputation of Gov. Bob McDonnell. The newspaper lists Sarvis’ promotion of restraints on the size and scope of the government as a reason for the endorsement.

The Daily Progress in Charlottesville

The Daily Progress in Charlottesville declined to endorse any of the three candidates and instead gave the nod to Bolling, who isn’t even running for governor. Rather than lambast the other candidates for their imperfections, the Daily Progress used its editorial to promote the lieutenant governor and what it describes as his “centrist” ideals.

“Although he did not seek such support, we nonetheless wholeheartedly endorse Mr. Bolling as a write-in candidate for governor,” the Daily Progress wrote. “Lt. Gov. Bill Bolling would have run for governor had he not been jockeyed out of the opportunity by last minute party maneuvers,” noted the newspaper, referencing tactics used by Cuccinelli and his supporters that allowed him to usurp Bolling as the Republican nominee.

“[Bolling] grasps the art of the political compromise, so often lacking in government today – at all levels,” the editorial said. “By temperament and training, he is a political moderate, not an extremist.” The Daily Progress also noted that “the major political parties might take notice in the event of a “sizeable showing at the polls.”

“The trio of candidates running for governor of Virginia represent the three most flawed politicians to lead the commonwealth’s general election ballot in a lifetime,” wrote the Virginian-Pilot in an editorial that endorsed McAuliffe.

The Pilot’s editorial staff said that of the three candidates McAuliffe is the most fit to be the Virginia’s next governor. “He is more capable of governing effectively, and is less likely to embarrass Virginia, than either of the other candidates,” the Virginian-Pilot wrote.

About Cuccinelli, the newspaper wrote, “Cuccinelli’s failure in high-profile legal battles against the federal government have succeeded mostly in giving him a platform to gain an audience with tea party followers, to peddle his book and to magnify partisan division and distrust.”

The Washington Times endorsed Cuccinelli and its editorial board thinks many of his ideas should appeal to people living in Northern Virginia.

“Mr. Cuccinelli sees a bigger and more intrusive government as a threat to basic civil liberties, a view shared by growing numbers of conservatives, moderates and liberals alike,” the Times wrote in the editorial. “Mr. Cuccinelli has a passion for righting the wrongs in the legal system with ways not traditionally considered Republican, but he remains true to limited-government principles.”

Regarding McAuliffe, the Times wrote that he “has never seen a problem that he thinks couldn’t be solved by raising taxes and feeding the beast.” The Times names as one of its reasons for endorsing Cuccinelli that he will shore up the guarantees put forth by the Bill of Rights. “The Bill of Rights was the work of Virginians, and as governor of the Commonwealth Mr. Cuccinelli would give their guarantees the vitality the Founders breathed into them as part of the Constitution,” the Times wrote.

The Washington Post endorsed McAuliffe in mid-October, but said that both candidates have their flaws.

“We share Virginians’ misgivings about the candidates, but for us, the decision is clear: Terry McAuliffe, his flaws notwithstanding, represents a continuity in a state that has been well served by comity, compromise and political coexistence between the parties,” the Post wrote. Cuccinelli, was described by the newspaper as “the most partisan, truculent and doctrinaire attorney general in memory” who is “full of outrages. As governor, he “would use government’s big stick to correct.”

Now the decision is with the voters in Virginia, who will cast their votes on Tuesday.

By Jackson McMillan and Jim Swing (Special to WTVR.com)