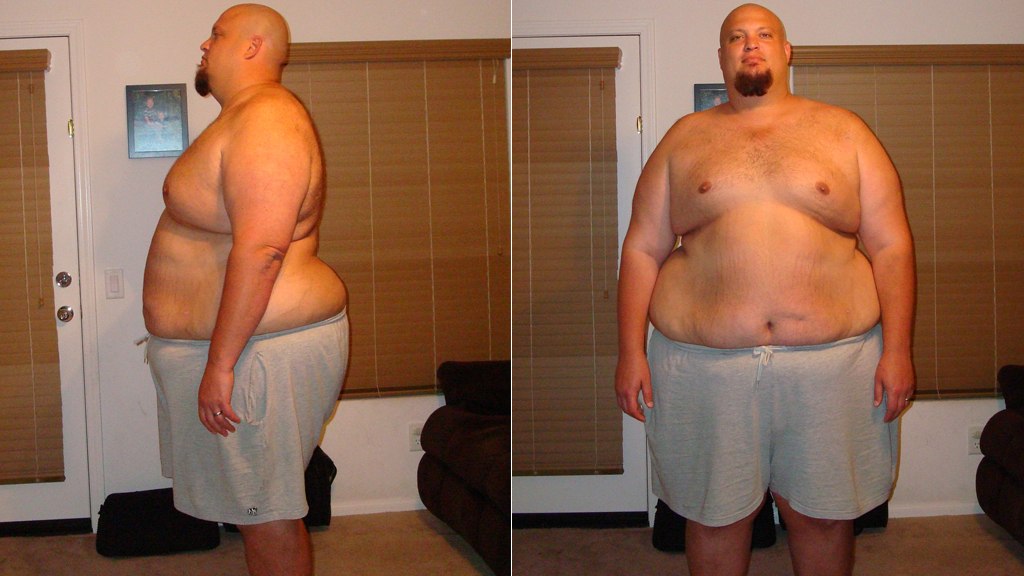 (CNN) — Stories about weight loss usually have a beginning, middle and end. How did these people gain so much weight? What made them decide to change? And how much do they weigh now?

But in real life, weight loss isn’t that linear.

Matthew Shack has struggled with his weight since college when a knee injury ended his promising football career. The 35-year-old from Oxnard, California, has lost more than 100 pounds several times, only to gain it back.

After dropping out of college to join the work force, Shack ate out three meals a day, seven days a week. By his 20th birthday, the 6-foot-3 computer consultant weighed 400 pounds. He decided he wanted a girlfriend and knew it would be difficult to find one at his current size. So he started working out several hours a day.

A short time later he met Amy. While the two were dating, Shack caught mononucleosis, or mono. For months, he slept 12 to 18 hours a day and slowly regained the weight he had lost.

Amy didn’t care. She had started gaining weight in middle school and never stopped. When she met Shack in 2000, she carried 180 pounds on her 5-foot-1 frame.

The couple married after three years together. When she got pregnant with their first son, Sidney, Amy weighed 220 pounds. When she delivered their second son, James, two years later, she weighed more than 300.

“We were eating out, and having fun, and we just kept on getting bigger and bigger,” Amy remembers.

The Shacks really wanted a girl to complete their family, but Amy had trouble getting pregnant again. After undergoing infertility treatment without success, they decided to become foster parents.

The interview process was brutal. “You guys are so large, what are you going to do when you die?” Amy recalls the agency asking. “Who’s going to take care of the children when you pass on?”

It was something neither had considered.

On June 22, 2009, the Shacks celebrated their sixth anniversary at Outback Steakhouse. While they chowed down on Aussie cheese fries, several rounds of bread and butter, salad, French onion soup, an 18-ounce prime rib, baked potatoes with the works and dessert, the couple realized they had to make a change.

“We knew we were heading down a path we weren’t going to be able to come back from,” Shack says.

Amy decided that she would undergo gastric bypass surgery. Never a foodie like Shack, she figured the surgery would be the simplest way to cut back on her portion sizes.

Shack made an appointment at his doctor’s office to weigh in because his home scale wouldn’t go past 350 pounds. He figured he would top out at 400 pounds — 450 max. When the doctor’s scale hit 500, he was floored.

Shack decided to use the app LoseIt! to track his calories. He created a spreadsheet and figured out how much he needed to eat every day to reach his goal weight of 235 pounds in 14 months.

“At the end of the day, losing weight is really just a big math equation — calories in, calories out,” he says.

Amy had her surgery the following month. “The next day, it felt like a truck hit me,” she says. But she pushed through the pain, altered her diet to eat small amounts every couple of hours, and lost 100 pounds in five months.

Two months later, Amy found out she was pregnant. It was a girl.

She lost another 40 pounds during pregnancy, which worried her obstetrician. But a healthy Samantha Shack was born on November 1, 2010.

Shack saw quick results as well. He restricted his calories to 1,400 a day and lost his first 100 pounds in a few months. By September 2010 he had lost 265 pounds and had reached his goal weight. LoseIt! called him its biggest loser ever.

That should have been the end of Shack’s story. But while losing weight is hard, keeping it off often can be even harder.

Shack stopped counting his calories and tried to stick to a healthy diet without constantly monitoring it. He barely noticed when the pounds started to creep back on.

“Since my frame is so large, I don’t gain weight in my stomach, I gain it head to toe,” he explains.

He and Amy became foster parents, and a new influx of kids reminded Shack why he had lost weight in the first place. In April 2012, he decided he wanted to do a “century” bike ride of 100 miles. Between April and November 2012, he lost 100 pounds in training.

After the bike race he regained some, then dropped some. He recently started gaining again when he lost his job. But he’s aware of his pattern — and has a plan to tackle the extra pounds.

“I haven’t been able to find my magic bullet,” he said. “There’s usually some motivation point that makes me want to lose weight. Once I hit that goal, I kind of lose my motivation.”

Amy has maintained her goal weight of 160 pounds for more than three years. She finished a half marathon in January. She stays active — “when you have six kids, they are your activity” — and continues to monitor what she eats closely. She knows people have gained back their weight even after gastric bypass surgery.

“I’m going to battle my weight for the rest of my life,” she says.

No one’s weight loss story really has an end.

The goal of a healthy lifestyle is to avoid ending the tale too soon.