LOS ANGELES (CNN) -- Details are emerging about the shooting and ensuing chaos Friday at Los Angeles International Airport (LAX). Here's an account of information as it came in to CNN.

-- Transportation Security Administraton head John S. Pistole issued a statement: "I am deeply saddened to inform you that a TSA employee was shot and killed today while on duty at Los Angeles International Airport. Other TSA employees also were injured in the shooting. ... Our thoughts and prayers go out to those who have been injured and their loved ones."

-- The shooter is not a current or former TSA officer, a federal source and an intelligence source briefed by the LAPD say.

-- The Transportation Security Administration seized 1,556 guns last year at airports around the country, almost double the 2007 total. Through September, the agency has seized 1,343 guns.

-- This week 29 firearms, 27 of them loaded, were discovered at TSA checkpoints, according to a TSA blog.

From a busy airport to a hospital

Multiple emergency vehicles were responding and at least one patient was taken to an ambulances. (Source: KTLA)

-- Based on September traffic totals from LAX, it's estimated that about 177,000 passengers pass through the airport each day.

-- Ronald Reagan UCLA Medical Center has admitted three males from the LAX shooting. One is in critical condition and two are in fair condition, said medical director Lynne McCullough.

She said the wounds were from "gunshot and other injuries as well."

From the scene, officials offer details

-- An intelligence officer briefed by Los Angeles police tells CNN that the suspect in the LAX shooting was shot multiple times in the chest, "center mass."

-- Nick Pugh told CNN affiliate KTLA he was momentarily handcuffed by police during the chaos following the LAX shooting.

Pugh was standing near the Virgin America Airlines check-in counter when he heard the gunshots.

"Somebody started shooting and everyone dropped to the ground and started crawling," Pugh told KTLA.

"It was definitely chaos... It was crazy," Pugh said. "I just saw an emergency exit and ran."

Police initially handcuffed Pugh, thinking he might be the gunman, he said, but they let him go quickly.

-- Almost every flight out of Los Angeles International Airport will be "significantly late," according to Gina Marie Lindsay, executive director of Los Angeles World Airports.

The airport is still accepting incoming flights, but doing so at less than half the normal rate, she said.

-- "This individual was shooting as he went into the terminal," and police in the airport "didn't hesitate" to confront the suspect, said Los Angeles Airport Police Chief Patrick Gannon. He called officers' actions "heroic."

He further said that officers three weeks ago "practiced the exact scenario that played out today" during a training exercise.

-- Los Angeles Police Chief Charlie Beck says he will not discuss the nature of the injuries or the identification of the suspect. The FBI is handling the investigation, he said.

-- Airport police tracked the suspect through the airport and "engaged him in gunfire in Terminal 3" before taking him into custody, Los Angeles Airport Police Chief Patrick Gannon said, adding there was only one shooter.

-- The gunman had multiple clips for his assault rifle, according to a former LAPD officer, who said one TSA agent was fatally shot and another agent was shot in the leg.

Police are looking for the shooter's car in the parking lot, the former officer said. 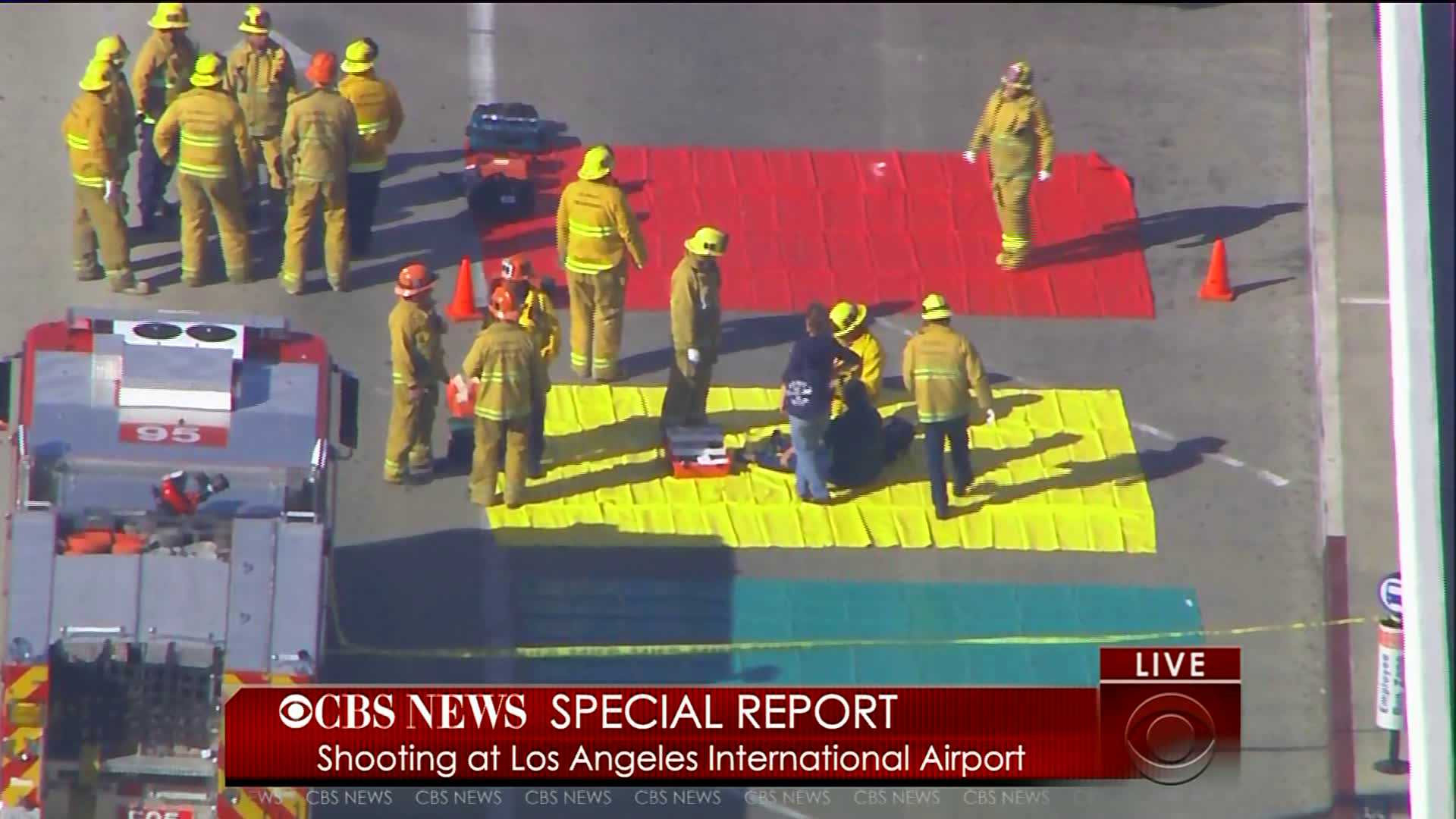 -- A federal source briefed by the LAPD confirmed that a TSA officer was killed in the shooting at LAX. The source cautioned that information from the scene is still preliminary.

-- A former LAPD ranking officer provided further details of the shooting, saying the gunman approached the security checkpoint, pulled out a concealed assault rifle and shot a TSA agent before walking through the checkpoint.

It was then a police officer opened fire, wounding the gunman, the source says.

-- A witness describes the popping noises and screams he heard during the incident.

"Our sincerest thoughts and prayers go out to the passengers and Transportation Security Officers killed or injured in this heinous act. Thank you to all of our brave TSOs who put their lives on the line every day to keep the flying public safe," he said.

-- "There was a guy downstairs who started shooting. One guy fell down. Panic erupted," a witness who gave his name as Alex told CNN affiliate KTLA.

The shooter appeared to have a rifle, Alex said.

-- Two people were shot - one of them a TSA agent , the other the gunman, and both have been transported to local hospitals, according to a law enforcement source.

Ten shots were fired, the source said. There were roughly 100 witnesses, all of whom are being interviewed.

The airport's post also said there are "multiple victims." Earlier, a law enforcement source close to the investigation told CNN that a suspect was shot and is in police custody.

-- President Barack Obama was briefed on the shooting at Los Angeles International Airport and will continue to be updated, but the White House had no further information at this time on what happened, spokesman Jay Carney said.

-- Eyewitness Chuck Ocheret says he was at Terminal 3's gate 30 near a food court. He thinks the gate is close to the checkpoint where the shooting happened.

"I was actually at Gate 30, just walking towards the food court. ... I heard a couple of popping noises. I (turned) to look. ... There was a stampede of people coming my way and I realized something was ... wrong."

"People were screaming, 'Run into the bathroom, get behind something,' " he said.

He picked up his carry-on bags, ran down a corridor, came upon the point-of-no return spot (where if you leave, you can't get back without going through security again). The guard there didn't appear to immediately know what was going on because he was telling people they couldn't return if they left.

Police then came and told everybody to get down on the floor. They then told everyone to go outside, and police eventually escorted them to the international terminal.

-- Kari Watson told CNN affiliate KABC she was at LAX Terminal 3 with her 3-year-old daughter moments before gunshots rang out.

"All of a sudden we heard people screaming, 'Go, go, go!' and I heard a couple of pops that sounded like gunfire," she said. "People were just running, so we left everything on the ground and we took off."

-- Witness Alex Neumann was at a food court, waiting to travel to Miami, when the incident unfolded. He said Terminal 2 was put into lockdown.

"People were running and people getting knocked down. There was luggage everywhere," Neumann told CNN. "Mayhem is the best I can describe it."

Several police officers moved about the airport with guns drawn, he said.

-- A witness describes the scene after the shooting.

Multiple shots from a rifle were fired in quick succession, and it's not clear whether the shooter breached the security checkpoint, the source said.

-- "All upper/departures level roadways are temporarily blocked by law enforcement. General public are being held back at law enforcement block," LAX tweeted.

It later sent another tweet: "Other than arriving flights, flight operations have been temporarily held."

Firefighters were laying down tarps on the street at the airport, which appear to be triage tarps. Several ambulances are at the airport, and at least one person was loaded into an ambulance.

The area around the airport was jammed with cars as police shut down access to the airport.

A "ground stop" was issued for planes scheduled to arrive at Los Angeles International Airport, the Federal Aviation Administration said. A ground stop means flights destined for the airport are held at their departure point, according to the FAA.

At 1:18 ET p.m. the Los Angeles Fire Department says it is assisting with a "multi-patient incident" at the airport.