RICHMOND, Va. – Former President Bill Clinton drew a crowd of around 500 people on Sunday afternoon at Richmond Community High School and asked them to elect his friend Terry McAuliffe as governor of Virginia. The Democratic candidate is currently leading the race against Republican Ken Cuccinelli, but has one of the highest unfavorable polling numbers of a frontrunner in recent history. 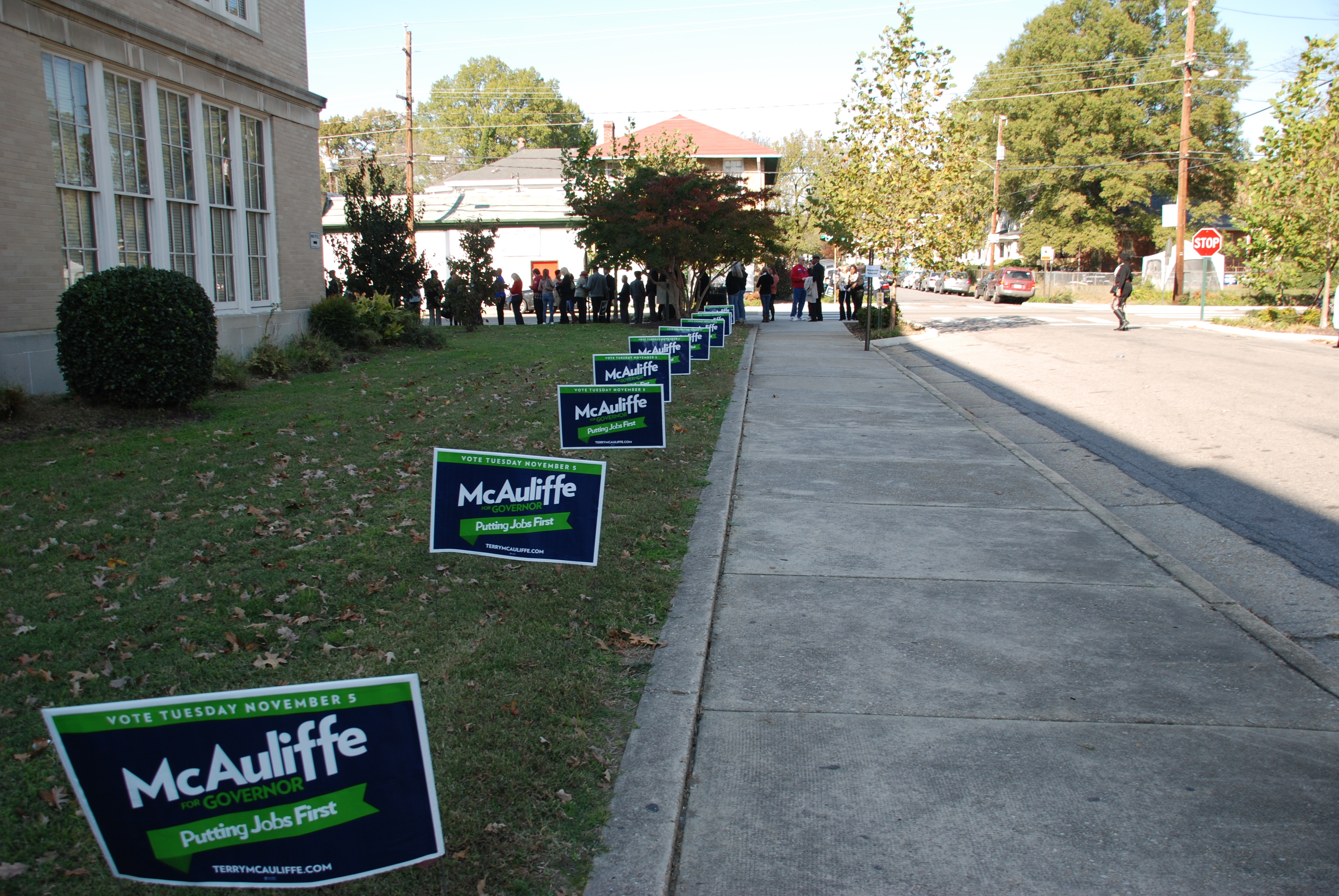 “Look, Terry McAuliffe is my friend. If he were 50 points behind, I would be here,” said Clinton. He and his wife, former Secretary of State Hillary Clinton, have relied on McAuliffe’s fundraising talent during their own election campaigns. The former president said he thinks all Virginia voters would be satisfied with McAuliffe if he is elected governor of Virginia.

“A year from now lots of people who voted against him will wonder what they were thinking on Election Day,” Clinton said of McAuliffe and also urged the crowd to elect Democrats Ralph Northam and Mark Herring as lieutenant governor and attorney general.

He encouraged the crowd to get out and vote on Nov. 5. “Once you get out of Washington, the person who can do the most to try to create new opportunities is the governor,” Clinton said and added that he knows he is just “preaching to the saved,” but added that “It doesn’t count if you’re for him, if you don’t show.

McAuliffe, who spoke before Clinton, said that he is proud to be running on a ticket that is in the “mainstream” of Virginia. “The mainstream ticket is laser-focused on the issues that matter to us Virginians: less traffic, great schools and economic opportunity for the middle class,” McAuliffe said.

Democratic candidates Ralph Northam and Mark Herring also stressed why Virginia voters should vote for the Democratic ticket on Nov. 5, each emphasizing that it is a “mainstream” ticket.

“From our commitment to investing in education, strengthening our transportation network and protecting women’s access to healthcare, our mainstream Democratic ticket is committed to building a stronger, more prosperous Commonwealth together,” Herring said.

Herring also addressed McAuliffe’s opponent, saying that Cuccinelli’s views were far outside those of the mainstream. “My opponent Mark Obenshain would be a continuation of that same approach,” Herring said.

“The Virginia way is about promoting mainstream, bipartisan solutions to the challenges we face and that is why I’m running to be your next lieutenant governor,” said Northam.

McAuliffe expressed his support for Northam and Herring and promised voters if they volunteer in the coming days leading up to the election, “Mark Herring, Ralph Northam and I will work our hearts out for you over the course of the next four years.”

Sen. Tim Kaine, predecessor of current Gov. Bob McDonnell, also pushed for the election of McAuliffe. “We need the kind of practical leadership that Terry McAuliffe is going to bring to the governor’s mansion,” he said.

Kaine told the crowd they can’t be “complacent,” because voter turnout is lower in off years. “We are here to make sure we hammer down and win this race,” he said. “We have to do everything we can to have that energy to produce the big victory come a week from Tuesday.”

Other Democrats who attended the event and spoke in support of the Democratic ticket were Rep. Bobby Scott and former Gov. Douglas Wilder. Wilder endorsed McAuliffe a few weeks after he and Cuccinelli spoke to Wilder’s public policy class at VCU in September.

“His Republican opponent has a long record of putting his own narrow social agenda in front of what’s best for our communities and our economy,” Scott said. He told the crowd that McAuliffe has to be elected for Virginia to move “forward.”

Wilder also attacked Cuccinelli, when he said politicians should put the people first, but “sometimes there are some who forget that women are people, too.” Cuccinelli and state Republicans were criticized by Democrats for their stance on women’s issues, such as abortion at the campaign event.

In a statement released Sunday, Cuccinelli’s campaign said it hoped McAuliffe’s tour with the former president would force the candidate to answer questions “that he has gone to extreme lengths to avoid in recent weeks.” Cuccinelli referred to a complicated financial agreement McAuliffe has with several family trusts and Ullico, the union-owned company that has previously undergone congressional investigation for risky investments.

McAuliffe and Clinton will continue their campaign together in Norfolk, Blacksburg, and Herndon on Monday, in Harrisonburg on Tuesday and in Charlottesville and Roanoke on Wednesday. Cuccinelli is scheduled to campaign with Sen. Rand Paul in Virginia Beach and Fairfax on Monday and with Gov. Bobby Jindal in Bristow on Tuesday.

By Katherine Johnson and Whitney Torres (Special to WTVR.com)